Blazing fires and flooding rains, commiefornia hit by one after another. Imminent earthquakes and tsunamis soon?

Rivers swollen by days of heavy rain inundated portions of northern California on Wednesday, forcing hundreds of people to flee their homes.

However, about half of the 4,000 people ordered to leave have refused to do so. “We want you to leave now,” Sonoma County Sheriff Mark Essick urged. “The roads may become impassable and you may not be able to get out.”

Those who decided to stay stocked up on food and drinking water.

Two towns – Guerneville and Monte Rio – were islands surrounded by water, local officials said. The only way to reach the two communities now is by boat.

The swollen Russian River topped 32 feet Tuesday evening and it could crest at more than 46 feet by Wednesday night, which would be its highest level in about 25 years, according to the National Weather Service.

The weather service issued flood warnings throughout the Sacramento Valley on Tuesday as tame roadside gullies boiled angrily with runoff, and creeks rushed over roads in some areas.

“It’s been mainly the small streams that have been running really high," said meteorologist Craig Shoemaker at the weather service office in Sacramento.

One rain gauge in Shasta County near Lassen National Park has picked up over 20 inches of rain in the past few days, the weather service said.

Heavy snow in the Sierra Nevada will continue, the weather service said, and “an additional 1 to 3 feet of snow is possible there through Friday morning.”

Mount Shasta Ski Park, about 185 miles north of Sacramento, was closed Tuesday as park officials shoveled the resort out from under the dumping of snow it received over the past day.

“We have not experienced this amount of snow in such a short span in a long time,” the park posted on Facebook Tuesday morning. "We have received 40 inches of snow in the last day and we are expecting 20 inches more today.”

The snow has already buried other parts of the Northwest: Officials in rural western Montana are prepared to rescue nearly 50 snowed-in residents of Cascade County if they need help. 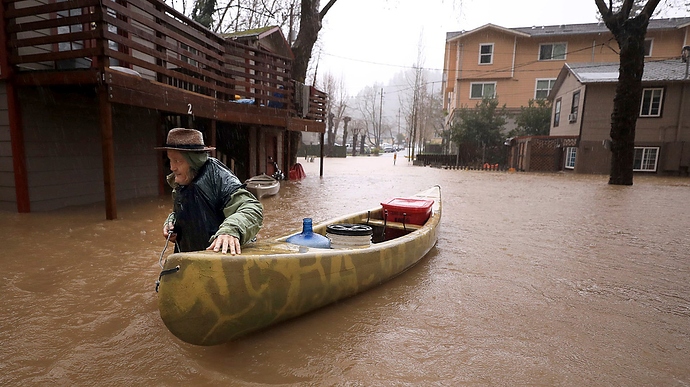 Rivers swollen by days of heavy rain inundated portions of northern California on Wednesday, forcing hundreds of people to flee their homes.

Could it be the wrath of God ?

The cost of High Speed rail:

During the 2011-16 California drought, politicians and experts claimed that global warming had permanently altered the climate, and that snow and rain would become increasingly rare in California. As a result, long-planned low-elevation reservoirs, designed to store water during exceptionally wet years, were considered all but useless and thus were never built.

Then, in 2016 and 2017, California received record snow and rainfall — and the windfall of millions of acre-feet of runoff was mostly let out to sea. Nothing since has been learned.

California has again been experiencing rain and cold that could approach seasonal records. The state has been soaked by some 18 trillion gallons of rain in February alone. With still no effort to expand California’s water storage capacity, millions of acre-feet of runoff are once again cascading out to sea (and may be sorely missed next year).

The inability to build reservoirs is especially tragic given that the state’s high-speed rail project has gobbled up more than $5 billion in funds without a single foot of track laid. The total cost soared from an original $40 billion promise to a projected $77 billion. To his credit, newly elected governor Gavin Newsom, fearing a budget catastrophe, canceled the statewide project while allowing a few miles of the quarter-built Central Valley “track to nowhere” to be finished.

Commiefornia should be left to drown and/or burn. Get a fresh start.

How could they have flooding? I lived there for several years and it was always in a state of perpetual drought.

How could they have flooding?

Bc sewage and spill water ways have not been maintained properly due to the mentality of “oh we dont need them muh global warming”. Still remember this 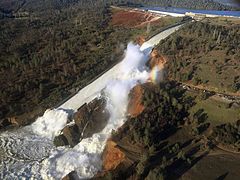 In February 2017, Oroville Dam's main and emergency spillways were damaged, prompting the evacuation of more than 180,000 people living downstream along the Feather River and the relocation of a fish hatchery. Heavy rainfall during the 2017 California floods damaged the main spillway on February 7, so the California Department of Water Resources stopped the spillway flow to assess the damage and contemplate its next steps. The rain eventually raised the lake level until it flowed over the emer...