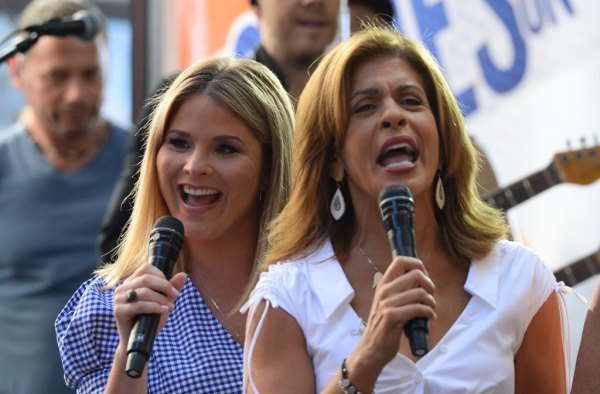 Do You Think The 'Today Show' Needs a Shakeup?

As The National ENQUIRER reported, sources have said that bosses at Today are looking to add a “famous” personality to join Hoda Kotb and Jenna Bush as hosts of the show’s sagging fourth hour! Insi...

I’m looking forward to the day we collect reparations from the slimey creatures.

We and many other people who have had experiences with aliens, or who have done enough research, already know that there are real aliens on earth. The only reason you may not know this is because currently the aliens are afraid of us and don’t come out in the open. In fact, there are dozens of different species.

Here are just a few articles that we have which show this (in addition to the experiences of Michael in The Mars Records and Pat in The Mars Force. (These books are free to download).

The Russians are ahead of us on this one. For example, here is a secret Russian book listing many different kinds of aliens. Please download it now.

Roswell is not unique to the US.

China and USSR/Russia as well as Nazi Germany had their “Roswells”.

Needless to say, the craft in question were used for back-engineering

The latest news about aliens is that the Russian Prime Minister, Medvedev, made an off-air comment that Russian Presidents are given a secret file about extraterrestrials living among us created much media interest. While naturally most mainstream media passed his comments off as a joke, it would appear he was not joking. Generally, Russians are more knowledeable and open about the truth of aliens and metaphysical phenomena than Americans are. His comment about the movie “Men in Black” was not referring to the fictional Hollywood movie, but to a Russian documentary about aliens.

After completing an on-air interview with five television reporters on December 7, 2012, Prime Minister Medvedev continued to respond to reporters and made some off-air comments without realizing that the microphone was still on. He was then asked by one reporter if the president is handed secret files on aliens, when he receives the briefcase needed to activate Russia’s nuclear arsenal. Medvedev responded:

“Along with the briefcase with nuclear codes, the president of the country is given a special top secret folder. This folder in its entirety contains information about aliens who visited our planet. Along with this, you are given a report of the absolutely secret special service, that exercises control over aliens on the territory of our country. More detailed information on this topic you can get from a well-known movie called Men In Black. I will not tell you how many of them are among us because it may cause panic.”

The Russian documentary Men in Black was recent, and not well known outside of Russia. It was translated into English and released on Youtube on December 18, 2012 . Here it is (apologies for the poor sound quality with echoes). Note: There are some missing translations, but I spoke with a Russian lady who saw this video, who said that nothing significant was left out.