How to Avoid Another Iraq Debacle 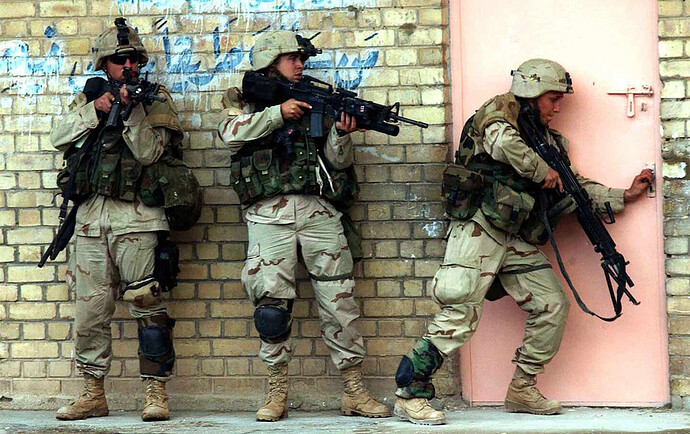 Have you ever heard an idea that was so brilliant and clever, so simple and beautiful that it rang right through your being - an ideological love-at-first-sight? On every level it made total sense and triggered “Why didn’t I think of that”.

Well, I heard such a thing the other day - some guy somewhere on the radio (so I’m not trying to take credit for the idea), but the guy sounded so damn sensible that I thought I should share the idea.

Here we are, over seventeen years into the invasion of Iraq. The cost has been incalculable in terms of loved ones lost, families broken, international respect dissolved, trust in government undermined.

Financially, the invasion’s cost has had both short and long-term destructive consequences. National Priorities estimates the to-date cost of the Invasion at $6.4 trillion - a bargain by most other estimates. The Washington Post insisted for years that the true cost of the war is at least $3 trillion, which turned out to be far too low – regardless, compare these figures to the Bush Administration’s projection of a laughable $50 billion.

But the joke is on us. After all, we knew he and his cronies were lying when they lied us into Iraq. All the objective evidence pointed to one thing - that Saddam was a paper tiger with no program of ‘weapons of mass destruction’ and no means or intent to begin one, yet here we are. ALL the goddamn evidence pointed to that.

Hell, I (along with thousands of other bloggers and forum posters at the time) were magically and miraculously able to write posts prior to the invasion detailing the obvious nature of Bush’s lead-up into war. How on Earth could a bunch of pajama-clad, computer-bound no-nothings like me know that Saddam had no teeth, when even the great leaders were convinced (in public anyway) that Saddam was the proprietor and hopeful user of WMD - what with the greatest intelligence agency in the world providing them with the ‘evidence’ and the most fantastical masterminds offering their invaluable analysis. How is it that we knew the truth and they didn’t?

The answer is… because they were obviously LYING . It was OBVIOUS . Anyone who could search Google and add 2 to 2 could have deduced the truth. And many did.

How could they not know?

Whether or not they ‘knew’ the truth, many of them felt they could not risk being on what they thought was the ‘wrong’ side of the issue - given the fear-mongered uprising that was bubbling in the electorate, the begging for blood in a post 9/11 world.

Political will was again molded by the knuckle-draggers, “You’re either with us or against us.”, …“mushroom clouds” and all that.

But the politicians aren’t the only ones to blame. In a democracy, ‘we the people’ have a lot of power and popular opinion is very important in determining the horrible choices that our elected leaders make. Just days prior to the invasion a USA Today/CNN/Gallup poll found that nearly 60% of Americans were in favor of such an invasion "in the next week or two." That figure dropped only slightly (to 54%) if the U.N. Security Council were to reject a resolution clearing the way for military action.

And just after the initial invasion, an ABC News/Washington Post poll showed that 62% supported the actions.

By May, another USA Today/CNN/Gallup poll found that "79% of Americans thought the Iraq War was justified, with or without conclusive evidence of illegal weapons."

Anyway, the question we need to answer in order to avoid another ‘catastrophe of choice’ in the future is… Why? Why did the politicians and the electorate fall for this war-crime boondoggle?

The answer, I think, is that so few were able to feel the potential consequences that such actions were likely to produce. Sure, maybe intellectually people knew the consequences of war, but few cared because, for them, there were no direct, personal, immediate consequences - you know, the kind that actually matter to people.

And after all, President Bush assured us that these Iraqis were the enemy. They wanted nothing more than to destroy our United States with ‘nukular’ weapons, various gasses and whatnot.

To boot, the anger of 9/11 was still very real, and though none of the 9/11 attackers (or even the organization that spawned them) had anything to do with Iraq, the Republican leadership was successful in convincing Joe and Jane Worker Bees that Iraq was a central figure in the ‘War on Terror’.

Of course our anger made it easier for the propaganda to infuse. As everyone knows, anger destroys commonsense, compassion, and empathy as well as any appreciation for consequences - essentially all the things we need to make a sensible decision.

Additionally, the angriest of the angry were also the loudest of the loud - the chicken hawks - the likes of which found voice on Fox News as ‘experts’ from think tanks like the American Enterprise Institute, the Heritage Foundation, and both the Hoover and Manhattan Institutes. Other cable news outlets followed suit, and voila - the anger grew, bloodlust intensified.

So the next question is, “How do we keep this from happening again”?

BIG IDEA: Tax the shit out of all establishment Republicans.

ACTUAL BIG IDEA: Create tangible, significant, measurable, personal, direct, and immediate consequences for every family and individual as a result of entering a ‘war of choice’ (i.e. any war/invasion/incursion, etc. that is enacted without any prior attack on our nation).

How do we do that?

Simple. In the event that our great nation is unfortunate enough to execute a preemptive military strike, or enter a ‘war of choice’, there will be a supplemental 10% income ‘war tax’ affected upon every family and individual.

I think it’s easy to see how such a consequence could be a serious damper on public support for a preemptive military assault. Everyone is on the line. Everyone will take a step back and seriously consider whether the cost of such actions are worth it. Most, I believe, will find it is not.

If this had been the consequence, how many people do you think would have supported the incursion into Iraq? Maybe a lot considering the Bush Administration’s assurance (lie) that the war would cost no more than $50 billion. But that was then. This is now. And after the debacle that was Iraq, the lies, the $50 billion turned $3 trillion. No one would believe such unrealistic projections and would naturally think the worst - especially if they were deliberately and methodically reminded of Bush’s Iraq.

And if the electorate is strongly against such actions, you better believe that their elected officials won’t want to sacrifice their jobs or ( gasp! ) raise taxes!

Even ignoring the electability issue, most politicians would likely vote ‘nay’ strictly out of personal financial interest. Congress people make a salary just shy of $200K per year. That means they’d each have to cough up about $20K to fund their ‘Yay’. No way.

Better yet, their ‘vested interests’, (i.e. donors and opinion-shapers who make millions or billions each year) will be looking at an increased tax tab of hundreds of thousands to hundreds of millions of dollars if we partake in any nonsense similar to Iraq.

You know that’s not going to happen.

So we all benefit.

Whether or not you agree with this particular strategy, it seems clear that the public needs to feel – not just ‘know of’ or ‘understand’, but really feel the consequences of our decisions if we are expected to make the correct ones.

Consequences are a good thing - if they help you avoid making catastrophically wrong decisions. A Preemptive War Tax might be just the thing necessary to ensure that the consequences of our decisions be felt in a very real and personal way, ensuring that our decisions are not made lightly.

True, the approach may make everyone wince - but that’s exactly what it should do. So if it was ever enacted, we could truly declare…

In the event that our great nation is unfortunate enough to execute a preemptive military strike, or enter a ‘war of choice’, there will be a supplemental 10% income ‘war tax’ affected upon every family and individual.

This is actually a really good idea. Of course, our scumbag politicians will never propose or pass anything like this because if they did, whenever they would want to go to war to advance their interests, they could expect absolute pandemonium from the American people - which is something they should always expect from us no matter what they do.

Here we are, over seventeen years into the invasion of Iraq. The cost has been incalculable in terms of loved ones lost, families broken, international respect dissolved, trust in government undermined.

What about millions of dead and maimed Iraqi civilians and those whose lives have been destroyed?

America created indelible karma which needs to be paid sooner or later.

I don’t know if it constitutes a good excuse to say “We were suckered by the 911 hoax (It has a dedicated thread on PB) under a Zionist President from one of the oldest ■■■■■■ families in America.”

After all, we knew he and his cronies were lying when they lied us into Iraq.

A shame you know little, nothing about the Iraq debacle leading to more garbage o the site.

Perhaps a dose of reality for you is in order:

Iraq has continued its weapons of mass destruction (WMD) programs in defiance of UN resolutions and restrictions. Baghdad has chemical and biological weapons as well as missiles with ranges in excess of UN restrictions; if left unchecked, it probably will have a nuclear weapon during this decade.

Since inspections ended in 1998, Iraq has maintained its chemical weapons effort, energized its missile program, and invested more heavily in biological weapons; most analysts assess Iraq is reconstituting its nuclear weapons program.

This is from the people who brought you Iraq at it’s finest.

Iraq was a sovereign country at the time. They did not attack the United States. Thousands of Americans died for nothing.

Wow, what a revelation however you missed the point completely.