Robert Zemeckis’ Welcome to Marwen, starring Steve Carell, got wiped out over the weekend in its domestic box office debut with a scant $2.4 million from 1,191 cinemas, tying with Johnny Knoxville’s Action Point (Paramount) to mark the worst opening of 2018 for a major Hollywood studio release.

The dramedy is expected to fade fast and will lose $50 million for Universal, DreamWorks and other partners on the film, according to box office experts. They will essentially forfeit the money they invested in the production budget of Marwen, which cost about $49 million before marketing, according to sources. Universal insiders, however, put the budget at around $40 million.

Instead, moviegoers entirely rejected Marwen, which is based on the real-life story of artist Mark Hogancamp, who was savagely beat by five white supremacists after telling them he liked to wear women’s high-heeled shoes. Suffering from a brain injury and amnesia, Hogancamp, played by Carell, creates a miniature World War II village where his tiny counterpart is a hero battling Nazis. Leslie Mann, Diane Kruger, Merritt Wever, Janelle Monaee and Eiza Gonzalez co-star.

Universal and Steven Spielberg’s DreamWorks are 50-50 partners on Marwen.

If you believe Mike and Jay at Red Letter Media, marketing budgets are often twice as large as production budgets, which means (((they))) had $150M tied up in this dumpster fire. I believe it too; I work in a place where there are a number of public silent closed-captioned TV’s tuned to basic cable channels and they have been cryptically advertising this movie constantly, at least during every single half-hour commercial break on all the most common channels for the last two months. The gist that I was only able to put together from seeing all the variations of the ads because they aren’t honest or forthcoming, is that Steve Carell is beat up by white guys outside a bar and then mentally retreats to a fantasy world where all the women who are nice to him are SUPER BADASS SEXY FEM+ mercenaries that friendzone him and they fight da ebil natzis in his autistic open-world dollhouse.

I saw “Mary, Queen of Scots” yesterday. Decent film but plodding in parts, and you never got a sense that the titular character was in much danger. Cate Blanchett’s film “Elizabeth” from the 90’s was better, IMO.

Instead, moviegoers entirely rejected Marwen, which is based on the real-life story of artist Mark Hogancamp, who was savagely beat by five white supremacists after telling them he liked to wear women’s high-heeled shoes

These are the “white supremacists” who kicked Mark Hogancamp’s ass. Maybe they just didn’t like some drunk homo cross-dresser hitting on them at the bar. Everyone knows how vocal and crazy these degenerate leftists get when they are sharing their perversions with the public. I know I wouldn’t have taken kindly to it. 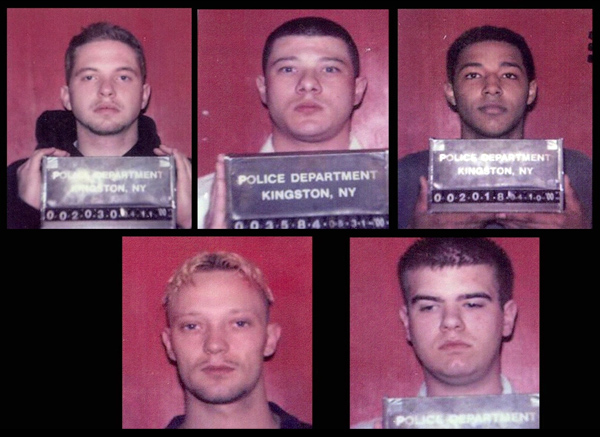 You mean the average movie goer can’t relate to a man who openly admits to wearing high heeled shoes? Who’d a thunk it!

Or will that debut on Lifetime?

Somehow I don’t think the guy in the upper right corner is a “white supremacist”.

So the real story is - ■■■■■■ gets drunk in bar, proceeds to get pushy about his sexual preferences, gets even pushier about wearing women’s clothing. Dudes minding their own business have had enough. They beat ■■■■■■■■ ass into silence, Spielberg and Zemeckis make a movie about it and twist the facts - no one watches it because no one cares.

$50 million dollars down the drain. If these big timers in Hollywood actually cared about these “causes” why didn’t they just donate money instead of wasting it on a movie? I will never understand how these people put 2 and 2 together.

A movie theater that is near me closed its doors.

Now the one at the mall is very nice & actually has more selections, including occasional showings of filmed concerts of the Bolshoi Ballet.

However, if Hollywood keeps turning out more Hollywierds like “Marwan”, plus, with the ridiculously overpriced admission & munchies prices, I wouldn’t be surprised if the newer mall cinema closed as well.

It’s a real shame when those older and smaller independent theaters close. They often show movies the big theaters won’t play. The one in my town does 80’s Night on Friday. One ticket will get you the Back to the Future trilogy, or Terminator/Predator, etc… with nice breaks in between where they serve beer and have food trucks out back. It’s awesome.

The concerning thing to me is it made $2.4 M

Looking at some info on the actual artist, I don’t believe he was homosexual as he had an ex wife & maintained crushes on various women.

However, and Hollywood just doesn’t seem to get it, the average moviegoer won’t pay hard earned money to see a man drunkenly admit he prances around in tights & high heels

Looks like, with the Women Save the Village from the Nazis theme, a little feminist message was included. Can you say FLOP? I thought you could.