History of race in Brazil

Despite the fact that the vast majority of the Brazilian population are of mixed descent, to some extent or another, an informal caste system still exists. But instead of Black or White, it’s more how Black or White a person is.

This is causing dicey issues with affirmative action policies, with many student applicants to public universities taking advantage of the quota allocation system by claiming to be Black because they had a Black great-grandmother somewhere way back in their family tree.

In 1872, whites made up only 38 percent of the population in Brazil. And by the time slavery was abolished in 1888 an estimated 4 million slaves had already been imported from Africa. Brazil’s government then launched a full-on propaganda and policy effort to “whiten” Brazil. It closed the country’s borders to African immigrants, and subsidized the voyage of millions of German and Italian workers, providing them with citizenship, land grants, and stipends when they arrived.

Instead of trying to get rid of Africans, the Brazilian government hoped to “mix them away”, and actively encouraged men to marry Black women so that the next generation would be less Black.

It’s interesting to contrast the experience of race in Brazil with that in the United States. This isn’t all just history, it could have implications for the future in the U.S.
There are a lot of people who think mixing, and whites constituting a minority, is going to make racism go away, but as the experience in Brazil shows, that’s not the case at all.

Picture that clearly illustrates the divide in the country, a favela (slum) sitting right besides a luxury condo development: 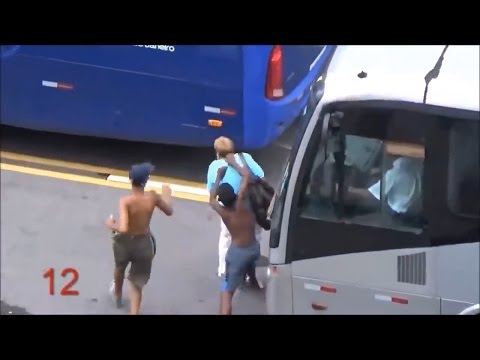 This is anathema to the “Native American” contention that white Europeans arrived uninvited at the peaceful continents of North and South Americas to steal land and relegate the “Natives” to the status of second and third class citizens.

But in reality, South America was inhabited by a race of people in the distant past and who were closely related to the natives of Australia and were wiped out by the warlike Native Americans. Did you even bother to read the thread’s OP before posting this?