A secret project in Ukraine: Bottom line: Khazars need a new country, given the failure of the “■■■■■■■ state in Palestine which doesn’t belong to them in the first place.

Khazars are not Semites. So sorry

As you’ve been shown the Ashkenazi DNA studies prove their original heritage from the Levant so the only question is why you keep repeating the same lies?

I hail from the so-called Ashkenazi branch of Jews, who account for the great majority of all Jews in the world today. Ashkenazis are distinguished …

o the only question is why you keep repeating the same lies?

Yeah… it’s like a compulsion, an obsession. I see that some studies have been done on the psychology of these people. There can be a half dozen reasons in general but this obsession that we see coupled with his personal interest and time voluntarily spent in Israel ( according to him) narrows it down. I’m not well versed in the variations of this type of psyche though so I wont try to use those analyses yet. At a gut level, I’m thinking that this guy in particular was hurt by his experience in Israel. Rejected by a girl, rejected by a school, rejected by a job… I cant tell. But it’s something along those lines. And now… as a defensive mechanism, he must prove the ■■■■ to be illegitimate and thus his rejection as illegitimate.

I don’t believe he’s ever been out of the UK.

I think he lives in Japan. I am referring to this digerdoo guy. He shows up with the same name on other places on the internet as Japanese.

Over a thousand years ago, the far east of Europe was ruled by ■■■■■■ kings who presided over numerous tribes, including their own tribe: the Turkic Khazars. After their conversion, the Khazar people used ■■■■■■ personal names, spoke and wrote in Hebrew

Khazars are basically rootless. No culture or language of their own. Today’s Hollywood shows what Khazars really are.

The ruling class of the Khazars were the royal Ashina clan who built enormous Gokturk empires in eastern and Central Asia in the sixth century, eventually defeated by the Chinese Tang Dynasty.

The conversion of the Khazars coincided with the collapses of these Gokturk empires (mostly due to their own infighting). The Khazars, hell bent on conquering the world, thought they were abandoned by their gods. The Khazar capital, built on the shores of the Caspian Sea, sank under water due to the expansion of the Sea, which didn’t help their mood.

The Gokturks, a people of the Asian race, thought they were specially chosen by their gods, as “Gokturk” means “blue Turks” or “sky Turks” believing Heaven was on their side.

But their brethren empires in their homeland went under and they were in desperate need of new deity to replace the old ones who obviously were not pleased with the Turks.

And yet the genetic studies prove otherwise.

Khazars are mishmash of all kinds races.
Very convenient to prove and/or disprove anything.

Kahzars haven’t existed as a people for over a thousand years.

The Ashkenazi however can trace their genetic heritage right back to Abraham.

Abraham as we know him never existed.

Do you deny wikipedia, a Zionist mouth piece?
Even they have to admit certain facts. 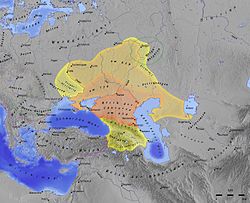 That Kaharia existed isn’t even in dispute. Your repeated claims that the Ashkenazi arose from Kahzarian converts however is utterly and completely disproven by more than 30 genetic studies all of which show their heritage in what is now modern day Israel.

If you can prove Abraham never existed go right ahead.

How many years did he live?
(According to the Bible)

You gonna believe that?

How old was Sara when she got — um — knocked up?

Your question is not proof of anything.

When you look at the biography of congressional representatives or U.S. senators who are dual Israeli citizens, or media moguls, or titans of the film industry, for example, you will often notice that the parents, or grandparents, or even the great grandparents are mentioned as ■■■■■■ immigrants from Russia or the Ukraine or other eastern European countries, including Turkey. These are the descendants of the Khazarian ■■■■ discussed in this article.