Yeah, and I wonder how much of it will actually reach the NHS? I’d guess 20 pence in the pound. But if it has made him happy, then good luck to him. Cynic as I am though, read the last line of the encomium, ‘Learn more about how to help people impacted by COVID’, which is another way of encouraging others to raise a similar amount for the charlatans to cream off? Like I keep saying - a lot of people are making a lot of money from this ‘crisis’. They’ve even told him what to say . . .

"He added: 'I think you’ve all got to remember that we will get through it in the end, it will all be right but it might take time. All the people finding it difficult at the moment, the sun will shine again and the clouds will go away.’" 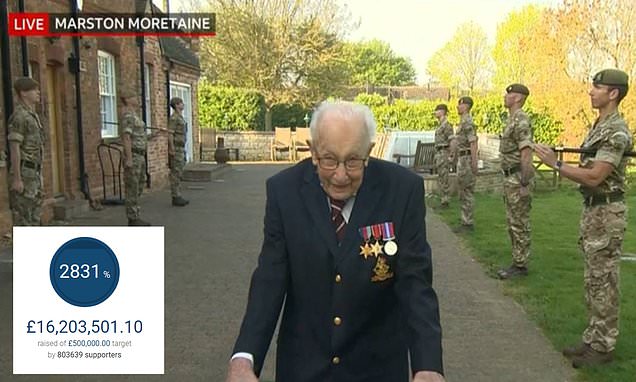 A gong for Captain Tom? PM to 'look at ways to recognise' WWII hero

Captain Tom Moore, 99, who has captured the imagination of the public with his heroics, finished the last few steps of his 2,530-yard walk at his home in Marston Moretaine in Bedfordshire.