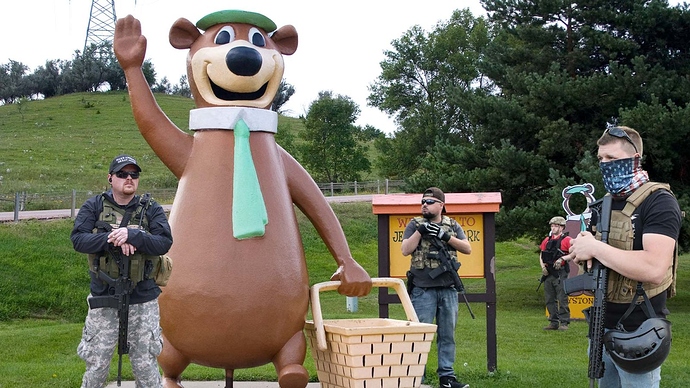 SIOUX FALLS, SD—Wielding assault rifles and chanting “smarter than the average bear” as they gathered around the cartoon character, heavily armed fans reportedly guarded a statue of Yogi Bear Wednesday on the off chance that he turned out to have supported the confederacy. “We will lay down our lives to protect this monument to Jellystone’s finest bear, whether or not he happened to be a defender of Southern slave states,” said Phil Markey, 43, echoing dozens of other protesters who pledged to march day and night in case activists discovered Yogi Bear did, in fact, support the Confederacy and attempted to deface or destroy his statue, arguing that the social justice warriors ignored the cartoon bear’s kindness to Boo-Boo Bear and well-known contributions to stealing “pic-a-nic baskets.” “Whether or not he was a lackey for Jefferson Davis—and, again, we don’t really know this—Yogi Bear is part of this nation’s rich history. You cannot simply erase his escapades with Ranger Smith.” At press time, the group’s leader was arguing this could all be a slippery slope to removing Yakky Doodle or Snagglepuss statues, or even shaming someone for simply singing “Hey There, It’s Yogi Bear” in public.

Got to protect all national treasures.