Yeah I seriously doubt that! We are speaking in context of US law not conspiracy innuendos.

I wonder if Hanoi Jane ever spread her legs for Harvey. They both just about fucked everyone else.

To convict of felony rape without physical evidence, years after the fact, when there was consent, friendly emails etc., is unconstitutional in its essence and Orwellian in its underpinnings.

There has to be an uprising among men. Women would never allow this to be done to them.

To convict of felony rape without physical evidence,

@Magog
Your estimation is pretty good. 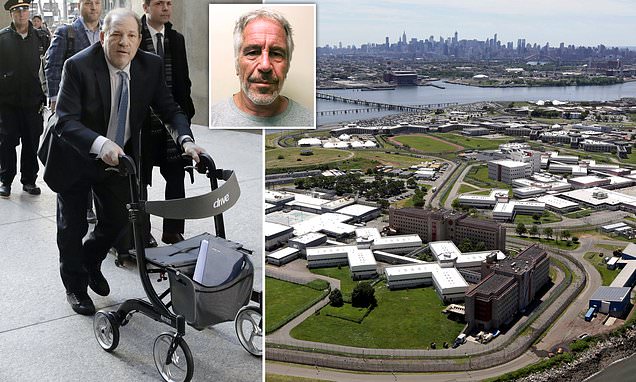 Prison officials 'fear Weinstein may try to kill himself like Epstein'

Harvey Weinstein was convicted of rape and sexual assault on Monday and officials at New York prisons are said to be concerned another high-profile inmate could take his own life.

I think his “body” will mysteriously disappear and he will wind up in Israel as a free man just like his predecessor Epstein.

Fortunately he’s probably going to die in prison. Even the charges in this case could buy him I think up to five twenty plus year sentences and he has another two trials coming up.

This is a well deserved conviction and they had plenty of contemporaneous evidence.

Leo De Caprico had better be on the first flight out of Dodge. Think of all the sluts he banged and then moved onto a younger model when they got close to 25 years old.

They will be fuming. The first to go after him will be those who blew their cash after their looks faded.

This is going to be a bloodbath, and the media can’t acknowledge the part women’s bad intentions play in men rushing for the exits.

Stop derailing the thread with your ■■■ hating bullshit.

We don’t hate Weinstein bc he’s ■■■■■■■ we hate him bc he’s a slimeball but thank you for making the connection.
Its not D who is derailing the thread, it’s you AGAIN.
@Tyfoon

Try peddling that BS to people who can’t read.

I think his “body” will mysteriously disappear and he will wind up in Israel as a free man just like his predecessor Epstein.

Everything for you two boils down to a fabricated ■■■■■■ Conspiracy theory.

Cosby was only a guppy in the lake of big fishes.Weinstein was a power player that had affected the careers of many actresses if they didn’t play by his rules.

Stranger things have happened in prisons and jails. I hope I’m wrong.

I half agree only because there seems to be a culture in Hollywood and within the legal circles that gives “Brown” people preferred status based on victim hood martyr. Cosby also had a big stature of influence due to his career accomplishments, but I agree with you on the part about Weinstein being a power broker thus was a bigger shark swimming with fish.

The reason I disagree with such absurd assertions is because Weinstein doesn’t have the goods like Epstein had politically. Epstein was very well connected to some very powerful people including the Clintons, so not hard to fathom he was Arkancided! Weinstein doesn’t pose as the same threat where he could incriminate a world leader.

It is thought the 67-year-old was still in hospital this morning as he had not been seen leaving the medical facility. 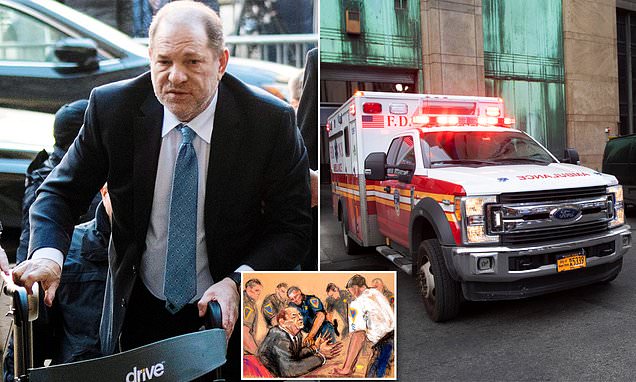 Harvey Weinstein is rushed to hospital by ambulance

Harvey Weinstein was found guilty on Monday of raping and sexual assaulting two women. The ambulance he was traveling to prison in was redirected to Bellevue Hospital Center.

now he will hang himself with toilet paper, there will be no autopsy and the body will disappear

It’s getting close to that…

What is absurd about Weinstein controlling the careers of actresses who didn’t do what he wanted???
I didn’t say he was in the same class as Epstein, but in Follywood, he was a major power player and how many producers and directors were willing to cooperate with him.

I am sorry perhaps I was not clear enough when referring to being “absurd”. As in going to conspiracy innuendos. The rest of your statement is moot because I wasn’t disagreeing with that part just putting it in proper perspective.

I may have misunderstood you also as I only said he was a shark in the ocean of his world in Follywood .
Thank you for your positive feedback