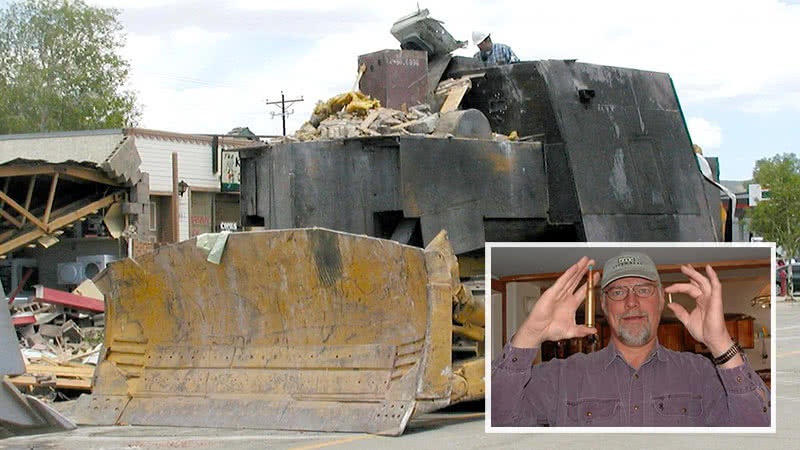 June 4th, 2019 marks the 15th anniversary of the Killdozer’s rampage through Granby, Colorado.

Marvin Heemeyer was a man who owned a muffler shop in Granby, Colorado. The city council ordained to approve the construction of a concrete factory in the lot across from Marvin’s shop. In the process, this blocked the only access road to the muffler shop. Marvin petitioned to stop the construction to no avail. He petitioned to construct a new access road, and even bought the heavy machinery to do so himself. Denied.

The concrete factory went up in disregard to the ramifications on Marvin’s business. To add insult to injury, the factory construction disconnected the muffler shop from the city sewage lines. An indifferent city government then chose to fine Marvin for this.

His business and livelihood were in ruin. Rather than lie down and die, Marvin chose to fight back. Over the course of a year and a half, Marvin secretly outfitted the bulldozer he bought to save his business with 3-foot thick steel and concrete armor, camera systems, and enclosed bulletproof glass.

On June 4th, 2004 Marvin Heemeyer lowered the armored shell over top of himself, entombing himself inside the Killdozer to make his last stand.

He burst forth from the walls of his muffler shop and straight into the concrete factory that ruined his business. Over the course of the next several hours, Marvin drove his Killdozer through 13 buildings owned by those officials that had wronged him, including the city council building itself.

SWAT teams swarmed the dozer, but it proved immune to small arms fire and even explosives. Another piece of heavy machinery was even brought out to fight the Killdozer, but it too fell to the dozers righteous fury.

In the end, Marvin’s Killdozer became trapped in one of the buildings it was built to destroy. Marvin chose to take his life, the only life he took that day.

From notes left behind after his passing:
“I was always willing to be reasonable until I had to be unreasonable. Sometimes reasonable men must do unreasonable things.”

A great man, thanks for that. I’m reminded of Shakespeare’s lines

For who would bear the whips and scorns of time,
Th’ oppressor’s wrong, the proud man’s contumely
The pangs of despised love, the law’s delay,
The insolence of office

Today we remember Marvin Heemeyer. A hero among those tired of being pushed around by government, a reasonable man driven to do unreasonable things. RIP Killdozer. May you forever tread heavily on the infrastructure of your enemies who dared tread on you.

Not all heroes wear capes but they all do have a Batmobile. 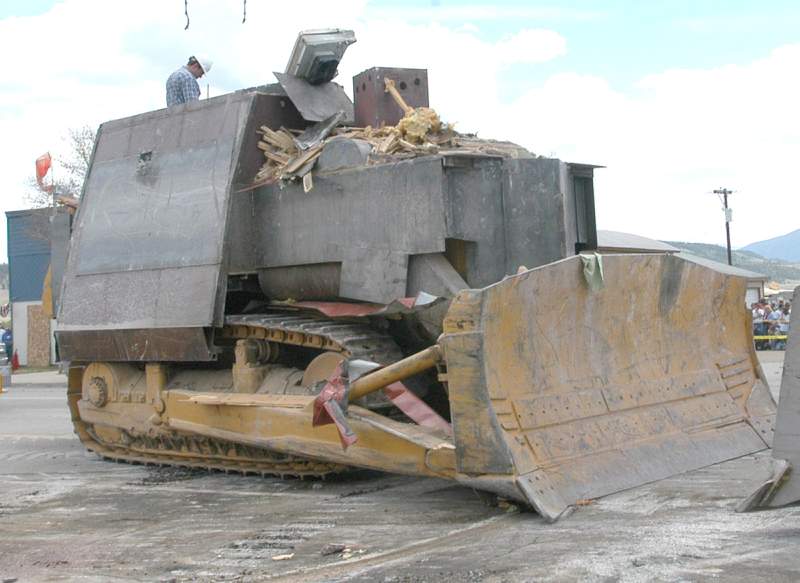 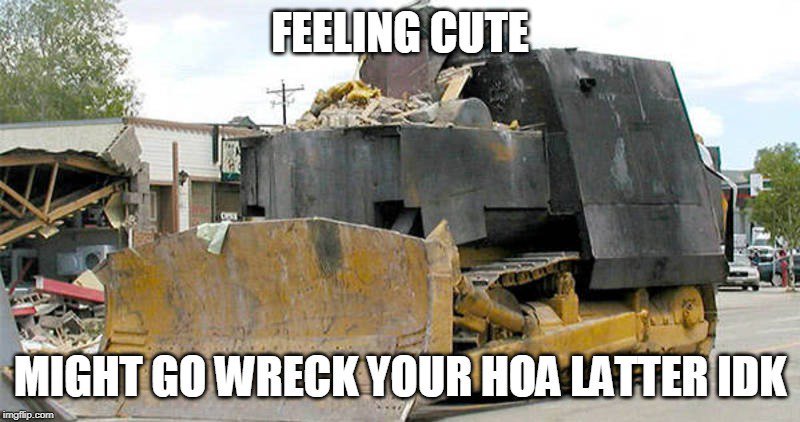 He was not a hero but someone that was spiraling into insanity.

What exactly did he achieve or change? Nothing.

What exactly did he achieve or change? Nothing.

He had some small pound of flesh from the concrete company, and gave the city council a bad day. And he killed no one. He targeted only those who had harmed him - even after he tried to be reasonable. But he stands as an example that actual (not whiny race card/fem card/LGWTF card pseudo) injustice can push a person over the edge, and those who cruelly display the “insolence of office” might be wise to look over their shoulders.

But he lived… most men never do.

I wonder what the aftermath of his path of destruction went like, what was it like for all the ones who got destroyed and how they had to rebuild? 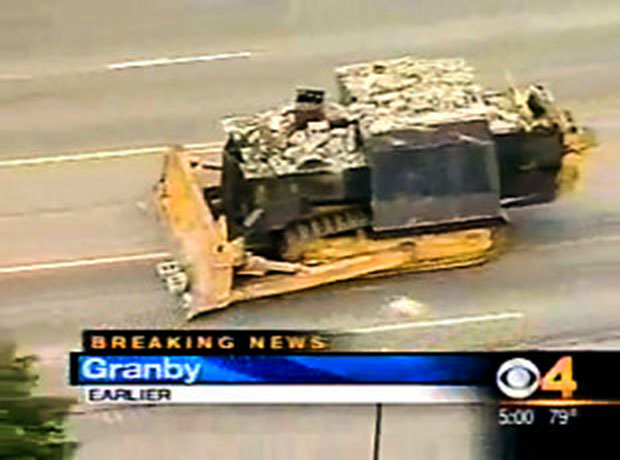 The Wrath of the Killdozer

Snopes provides some food for thought about Heemeyers folk hero status. This echoes a lot of my thoughts. 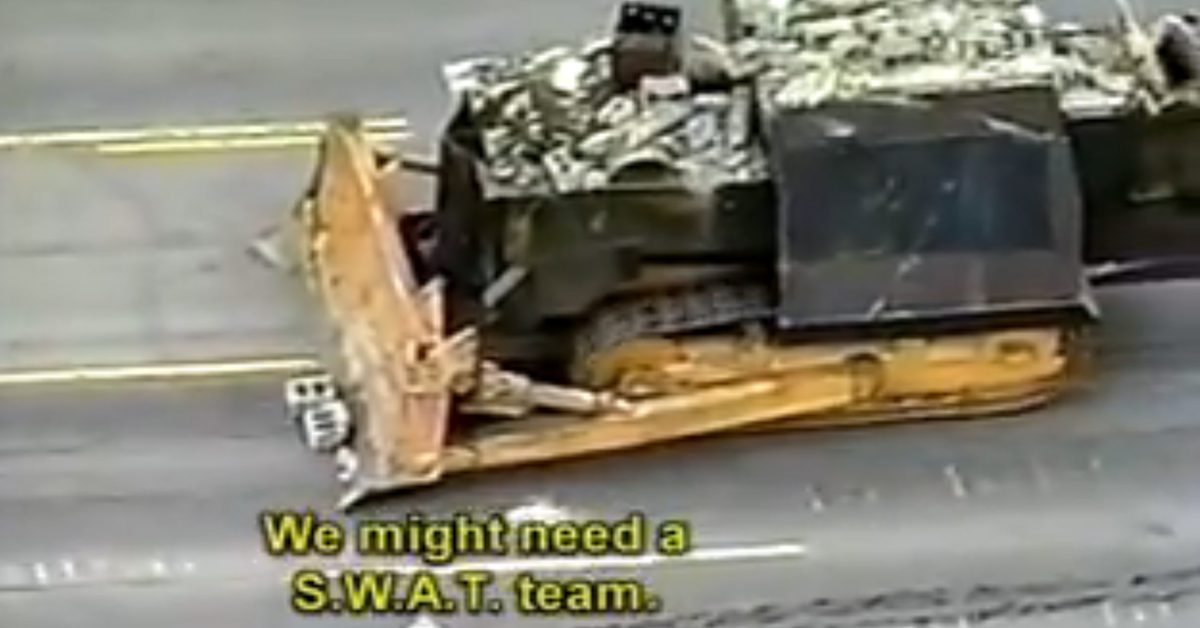 A viral message touting the "heroic" acts of Marvin Heemeyer, a man who created a "killdozer" to exact revenge on a small Colorado town, omits several key details.

Snopes provides some food for thought about Heemeyers folk hero status. This echoes a lot of my thoughts.

Kind of odd that suicide is heroic to some…

Thanks. I knew there had to be more to the story.

He sent one hell of a message too and you can bet the CC and Zoning Commissions both heard it loud and clear.

It wasn’t the suicide that made him heroic.