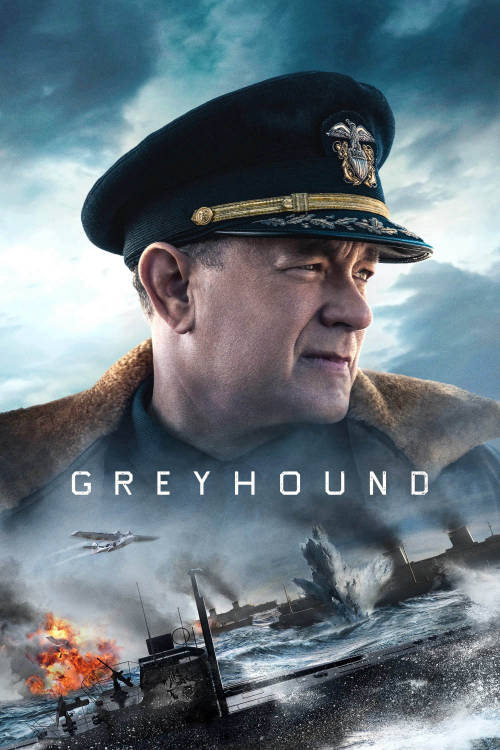 Greyhound 2020 on lookmovie.ag in FullHD for free

A first-time captain leads a convoy of allied ships carrying thousands of soldiers across the treacherous waters of the “Black Pit” to the front lines of WW2. With no air cover protection for 5 days, the captain and his convoy must battle the...


I was very surprised as to how well this movie is. Ths script is excellent totally in line with Naval jargon. Uniforms are all correct and the command sequences must have been edited by a naval officer. I learned that the NAZI`s used high pressure air bottles launched from the torpedo tubes fooling sonar.Well worth watching.
LastManOut August 14, 2020, 10:26pm #2

Typical Hollyweird movie! I give it 3 stars out of 5.

It’s gotta be somewhere else online. Even 3 out of 5 stars might be worth it.

My criticism of this movie is that it lacked realistic tension and Character development. Giving it three stars I was being generous. The entire movie is surrounded by one character Tom Hanks! The CGI didn’t give the viewer a sense of space to which they could feel the icy depths of the Atlantic, or the ships presence in water. Instead the action and tension we do get seemed too choreographed, forced, scripted. The script to which this is based on a true story is rather lost on emotions that should have been more terrifying as opposed to happy endings the typical Hollywood ride off in the sunset with the beautiful woman ( cue up heroic music by John Williams as an example) that we come to expect with such productions. Then again, it’s Tom Hanks, snicker, snicker!

At least with “1917” we still get a sense of tension and the human struggle to find a semblance of humanity within the dirge of grief.

It’s not another, Tom Hanks in a rubber raft movie is it? He can really bug me

It’s not another, Tom Hanks in a rubber raft movie is it?

No I wouldn’t say that, just seemed his portrayal of the character he is playing comes off as being devoid of any depth. Not organic but contrived. Such movies should be riveting, a sense of sea sickness. Instead we get shots of the cook making appearances with perfectly prepared meals on a steady ship, when realistically the ship being in rough seas and in inclement weather should have everyone on board bracing its unsteadiness.

So it seemed phony. Tom Hanks made some good movies, but most of his big movies I found annoying. I really hated that pretentious lifeboat movie.

Forrest Gump took multiple viewings to appreciate, but it is corny and fake.

I liked Joe and the Volcano.

I compare him to Bruce Willis in that they are directors actors. They are capable in their skills but it’s the directors job to mould them into the characters that they are suppose to portray. A good example of this is Bruce Willis in “12 Monkeys “ and Hanks in SPR. Completely believable characters but it’s the directors of those movies that were able to get that type of performance out of such actors. I don’t fault Hanks for his portrayal in this movie but rather the creative team including the director for its short comings. Movies especially ones coming out of Hollywood these days lost the art of film making altogether when executives get involved in the creative process and “Greyhound” is a typical result when too many chefs spoil the sauce.

If I had the Budget to direct such a film, first off I would not recruit Hanks for such a role. Second I would also make a concerted effort not to hire Hollywood yes men to make my executive decisions. Thirdly and last, I could make such a film that would be much more effective for a third of the cost by reworking the script, the scenes and the overall pacing of the film.

Well it’s not on Amazon Prime, Netflix or On Demand so I guess I’ll have to wait. I’m not going try the risky links

The link I posted works just fine for me.

My Norton 360 said it’s a malicious site and blocks it.