GOP senators prepared to acknowledge quid pro quo, plan to argue it was

Please show a direct quote of the “racially charged language” you claim @AZRWinger used to initiate your comment.

The TDS sickness has eaten away what little brain matter Dems ever had between their ears.

Remember the 8 years of ODS.

Is this your defense of Trump’s QPQ???

Denuded? That’s hilarious. Promise you will look up the definition before you use the term again.

You must be awfully frustrated at having your comments defenestrated. That’s why you reflexively claim the history I referenced is inaccurate. It’s typical for Leftists to deny basic facts they find inconvenient.

Democrat’s impeachment process? Oops you exposed the Democrats perverting impeachment into a partisan political weapon. It’s like Democrat Congressman Green said if Trump’s not impeached he’s going to get reelected.

It’s Constitutional is just a fig leaf to mask the attempt to reduce elections to Kabuki theater.

Tied to the mast of the good ship impeachment you bray about the Constitutionality of Resistance Democrats burning down the Presidency with a Star chamber inquiry led by the same Trump hating Democrat who lied for 2 years about having seen secret evidence convicting Trump of collusion with the Russians and opened the last public hearing with another blatant lie about the phone call they were supposed to be investigating.

But don’t worry, the ad hoc process Schiff makes up applied to hand picked sympathetic witnesses in secret hearings is so perfectly “Constitutional”
only 2 Democrats and all Republicans voted against continuing the lynching. The rest of the Democrats voted with the party. Split on party lines, my how the Democrats carnival of hate has brought the country together.

Speaking of Shit for Brains Schiff!

Adam Schiff had a little Freudian slip [on Twitter today as he outlined how his impeachment team views President Trump defending himself against baseless accusations. “ Efforts to intimidate or threaten witnesses will further build the case for obstruction, itself an impeachable offense .” 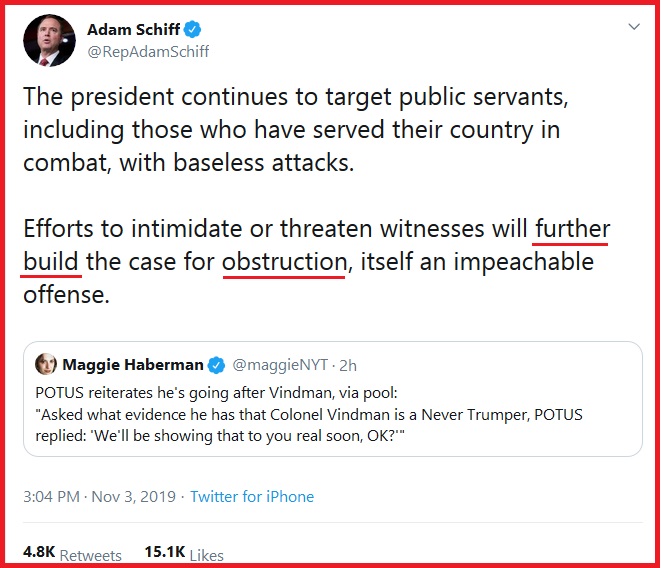 “No-one is “threatening” or “intimidating” a witness, President Trump is asking questions about the credibility of the no-longer-anonymous whistle-blower. However, no whistle-blower has the right to be anonymous. Even the statute that protects whistleblowers only applies to retaliation. It is ridiculous to think whistleblowers can remain anonymous.

That said, within the tweeted messaging from Adam Schiff there is the indicator of exactly what all of this investigative nonsense is designed to create: a case for obstruction”

And yet after days and days (maybe weeks now) of bitching about it, you still cannot point to any law or the constitution itself for a violation by the democrats on this…

Neither can you point to a reason House Democrats rejected the fair and impartial rules adopted by the last 2 impeachment inquiries in favor of a lynch mob approach.

Your excuse seems to be the Democrats don’t need to abide by any rules of a balanced, fair and objective inquiry as long as they nominally don’t violate the law. It’s worked marvelously well at producing an impeachment process supported only by Democrats. Remember the politician that said impeachment would require bipartisan support? Oh yeah, that was Nancy Pelosi. Judging from the belated vote to establish rules, the Democrats conduct has created more partisan division than when they started.

They don’t need a reason. The HOUSE MAKES THE RULES. I’m sorry that gets your knickers knotted up. Be pissed at the FF’s for being so ambiguous on the matter.

Your excuse seems to be the Democrats don’t need to abide by any rules of a balanced, fair and objective inquiry as long as they nominally don’t violate the law.

It’s your opinion that they aren’t being fair and balanced. But Mark Meadows, who is ACTUALLY there has stated that the republicans are represented by 45 members in the proceedings and that they have been given equal time and access to the witnesses that are being deposed. Again, sorry that your knickers are in a knot. But this is legal, fair, and balanced…

To the dimwit Democrats, refusing to participate in a kangaroo court proceeding wherein all semblance of fairness is off the table IS OBSTRUCTION.

I agree that it is obstructing the continuance of the unconstitutional sham, but it is definitely PROMOTING justice by demanding the rules be fair.

To hell with Adam Schiff and his farce.

The request was to provide the reasons why the House Democrats didn’t adopt the same rules used by previous impeachment inquiries. The answer is because they don’t have to. Behaving like tyrannical children has failed to gather bipartisan support and didn’t unite the Democrats. Running the inquiry in this fashion failed according to Nancy Pelosi’s requirements for impeachment but you are either afraid or incapable of discussing why the Democrat lynch mob chose this course of action

No, there are objective differences between how this impeachment inquiry is being conducted and the 2 previous ones. There is no disputing Republicans aren’t allowed to call witnesses or introduce evidence. The President’s council isn’t allowed to attend or participate in any way
These are not opinions they are facts. It’s telling that you don’t even attempt to offer any defense of the Democrats decision to strip the hearings of any fair process for Republicans or the President to participate on an equitable level.

I could not find the statement you attribute to Congressman Meadows. I did find this on the Congressman’s site.

" If it wasn’t already crystal clear, it’s now beyond any doubt: there is no policy priority too important, no lack of evidence too glaring that will prevent Washington Democrats from going after this President. It has been their single-minded goal this entire Congress. They are an angry mob in search of validation."

If your claim about what Meadows said is accurate it still doesn’t speak to the privileges stripped from Republicans and the President’s council compared to previous inquiries.

No, there are objective differences between how this impeachment inquiry is being conducted and the 2 previous ones.

There may be, but it doesn’t matter. These things are not set in concrete.

It’s telling that you don’t even attempt to offer any defense of the Democrats decision to strip the hearings of any fair process for Republicans or the President to participate on an equitable level.

Bullshit, I’ve told you REPEATEDLY now, that republicans have 45 members in the process and are provided EQUAL time and access to the witnesses during depositions…

It doesn’t matter. That’s your big excuse for Democrats acting like Cartman riding around on his big wheel shouting “you will respect my authority”.

If it doesn’t matter, then why didn’t they adopt the same rules as were in place for the Clinton impeachment? Why didn’t they authorize the inquiry with a vote on the House floor at the beginning instead of after their round of secret meetings in the basement?

The Clinton impeachment effort was successful, 5 Democrats eventually voted yes on 3 of the 4 articles of impeachment. No Republicans voted for the farcical rules the Democrats rammed through, they were joined by 2 Democrats. All you can muster in defense of the Democrats openly partisan perversion of impeachment process is it doesn’t matter.

If it doesn’t matter, then why didn’t they adopt the same rules as were in place for the Clinton impeachment?

Because they don’t have to, and why would they. You’re hung up on something that’s quite ambiguous and every time you ask, the answer will be the same. The WH cannot dictate the rules, the rules are set by congress and that’s just a fact that you don’t like.

You have repeatedly claimed Meadows said that. I cannot find the quote. When I ask for a link to verify the quote, you respond with the same profane term President Trump deploys at his rallies to great pearl clutching by Democrats.

Worse, you dishonestly edit my comment to remove the concerns about the grossly unfair exclusion of the President’s legal counsel and not allowing Republicans subpoena power. You try to hide both with profanity in caps hoping I won’t notice. Didn’t work.

Again, your obsession is on what I don’t like instead of the objective differences between the current travesty and previous impeachment inquiries. It’s a cartoonish approach to something very serious.

I never suggested the WH should dictate the rules for impeachment. It’s a pathetic attempt at a straw man to suggest I did. I have invited you to defend the Democrat decision to reject the rules used in previous impeachment inquiries but you just dodge and childishly claim no discussion is necessary.