German, US armies strive for ‘integrated’ operations by 2027 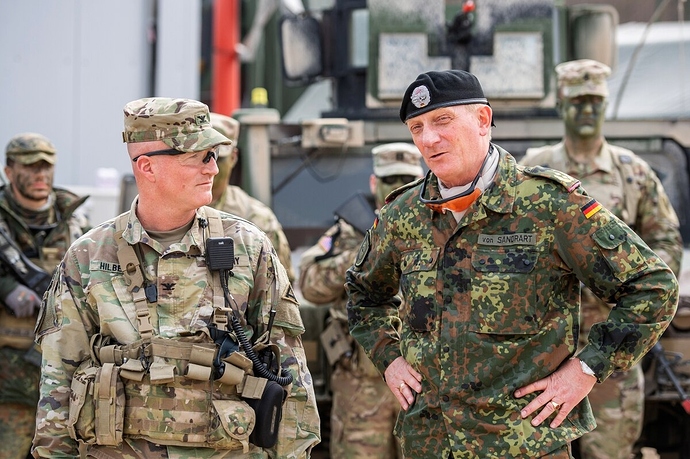 COLOGNE, Germany — The chiefs of staff of the armies of the United States and Germany have signed an agreement targeting an unprecedented level of interoperability between their formations within seven years.

The strategic vision statement, as officials call the pact, sets out an ambitious agenda premised on the idea that the two ground forces will be instrumental in keeping the peace in Europe.

Gen. James McConville and Lt. Gen. Jörg Vollmer signed the document last week during the annual Conference of European Armies at the headquarters of U.S. Army Europe in Wiesbaden, Germany.

“The strength of our Cold War Army-to-Army relationship was the strength of the NATO alliance,” the statement reads. “Greater interoperability between the German and United States Armies is critical now as NATO faces multiple threats along its borders.”

By 2027, the two countries’ ground forces want to push interoperability — meaning both forces working seamlessly on the same tactical objective — to what the document calls an “integrated level” in both regional and global operations.

That means, for example, a German brigade would be able to work under the operational control of a U.S. Army division headquarters as a “peer formation” to American units, and vice versa. A similar type of integration is envisioned at the higher echelon, with divisions from one country operating at the direction of a corps headquarters of the other.

Additional objectives include aligning the information systems of both militaries so that there is a common procedure at the brigade and division levels for intelligence collection and sharing as well as and joint targeting.

Both armies also commit to pursuing initiatives in the area of intelligence, surveillance and reconnaissance that would “raise the interoperability level to ‘compatible’ to allow for sufficient access to intelligence for high-tempo operations,” the document states.

Improvements also are envisioned in the field of fires, such as “networked fires,” “interchangeable munitions” and sustainment.

The new pact suggests that the souring of political relations between Berlin and Washington has had little bearing on the armed forces. President Donald Trump has made it a pastime to regularly complain how Germany, in his view, is taking advantage of the United States when it comes to its security.

At the same time, officials in Germany are somewhere between waiting out America’s Trump years and readying for the more sinister possibility that the trans-Atlantic partner may truly turn its back on multilateralism as an organizing principle of its foreign policy.

Retired Lt. Gen. Ben Hodges, a former commander of U.S. Army forces in Europe, lauded the new agreement as a continuation of the decades-long relationship between soldiers from both countries.

“It addresses the reality of how Americans and our European allies might have to fight in future conflicts — in multinational formations that are task-organized down to and including the tactical level,” he told Defense News in an email.

He said the agreement serves as a starting point for adjusting weapons requirements and policies to drive interoperability to a level beyond the Five Eyes arrangement, an intelligence sharing pact between the United States, Canada, the United Kingdom, Australia and New Zealand.

Hodges argued the level of integration envisioned by the new agreement is “definitely achievable.” The key, he said, lies in making the necessary policy and technology changes. For example, he said, both nations need secure, tactical, frequency-hopping radios, as well as digitized processes for employing artillery and rocket fires.

Finally, a common operating picture of the battlefield that is “truly common,” meaning information about all force locations would automatically appear on command screens of both nations, is needed, according to Hodges.

For Germany, the question of funding and an unclear policy on the country’s overall foreign policy ambitions may turn out to the biggest obstacles to seeing the new vision statement through, if recent debates in the country are any indication.

In short, there is a clear mismatch with the U.S. when it comes to military spending, and Germany has had trouble commanding an equipment structure that would be required to meet the operationally focused character of the bilateral pact. 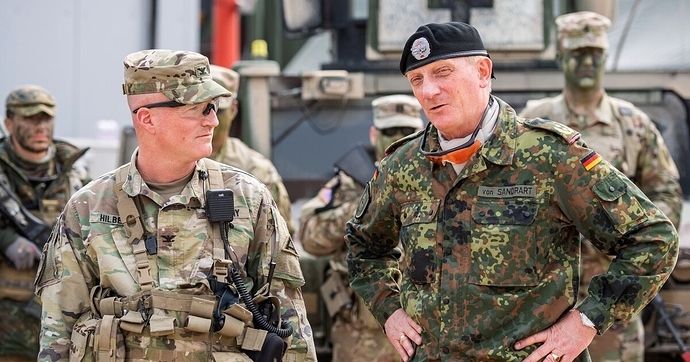 German, US armies strive for ‘integrated’ operations by 2027

A new agreement sets out an ambitious modernization agenda premised on the idea that the two ground forces will be instrumental in keeping the peace in Europe.

At this point we should do the whole world a favor and just annex Germany as a US territory. We probably should have done that after WWII. We have been providing them with an unbelievable level of security - so much so that they should be expected to give up their sovereignty for it.

Instead of integrated operations - why not let Germany go first and take the heaviest casualties for us? It’s only fair. We have been their private security force since 1945.

I don’t see what the benefit for the USA is. Maybe the unlimited use of Germany as a logistic hub? 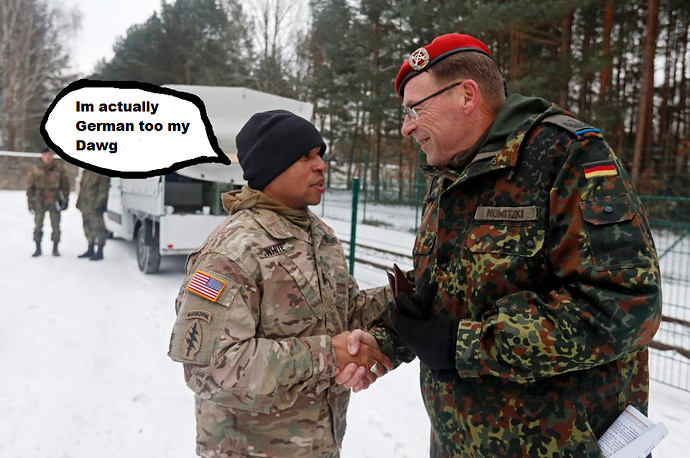 That caption is stunningly accurate.

Yo dawg lemme get that schnitzel n sheeeit. We be interoperating. Can u see me in dis desert camo cuz it be snowin.

The German Republic will need a stronger leader to make this successful. The AFD is the only party willing to do this. I hope the AFD becomes stronger shortly to have a Chancellor in office.
I hope the German Army will be brought up to pre WW2 level of manpower and better vehicle maintenance than it has now.