Gallup: Americans Say No. 1 Problem is 'Government,' No. 2 is 'Immigration'

Gallup: Americans Say No. 1 Problem is ‘Government,’ No. 2 is ‘Immigration’

(CNSNews.com) – A new survey shows that the “top problem” cited by Americans is “government,” and the second top problem is “immigration.” For contrast, among the issues seen as least problematic for Americans are “unemployment-jobs” and “gun control/guns.”

In the survey, conducted by Gallup after the midterm elections, the polling firm asked Americans about the country’s top problems and then listed those issues that were “mentioned by at least 3% of respondents.”

Nineteen percent of respondents cited “government” as the problem, making it the top issue of concern. In second place came “immigration,” cited by 16% of the respondents. However, when broken down politically, 29% of Republicans said immigration is a problem but only 7% of Democrats said the same. 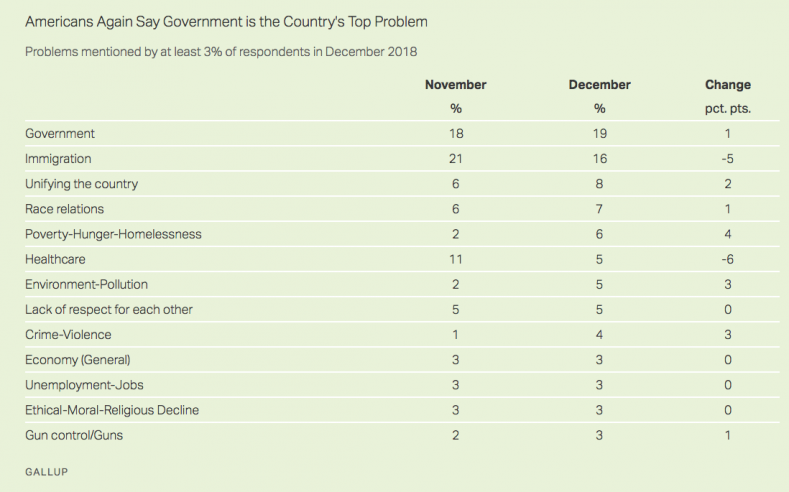 Only 8% of respondents said “unifying the country” was a problem, and only 3% said unemployment-jobs and then gun contol/guns were a problem.

Also, only 5% said “healthcare” was a problem.

“These data come from a Gallup Dec. 3-12 survey, conducted as a looming budget impasse between Republicans and Democrats threatened to shut down the government,” reported Gallup. “The government has commonly been cited in recent years as the most important problem facing the country, with the problem having received or been tied for the most mentions – 22 times in the last 24 months.”

“As another potential partial shutdown of the Federal government approaches, government is again mostly likely to be cited by Americans as the most important problem facing the country,” said Gallup. “However, the current level noting government dissatisfaction is still below the 25% who cited the issue in January of this year, a few weeks prior to the last time the Federal government faced a shutdown. That shutdown ended after three days.”

I’m glad more and more Americans are starting to realize that the majority of the problems we have won’t be solved by government because they are CAUSED by government.

The problem today is that people think government is a means to shit on someone else.

That’s why you have all these lobbyists trying to get people in congress to make laws that ban this, or increase the cost of that.

It’s to shit on their competitors.

Or, if it was a group of “concerned citizens”, it’s to shit on a group of people

Hey, do you hate cisgender heteros more than you hate Hitler? Vote for Jane Doe, she wants to make LGBT quotas for every single job as a law.

Do you hate the homosexuals? vote for The Electric Fence, he wants to make it illegal to be gay.

It’s no longer "I’m voting for this guy because he wants to preserve the rights of everyone .

It’s “I want to vote for this guy because he wants to preserve the rights of only this one group of people”.

Unfortunately the article doesn’t explain what about “government” is The Great Concern.

One could say, government period.

One could use their imagination.

Go ahead, tell me anything government does and does it well. A government projects on time under budget that benefits all people.

Wait till they get government run healthcare and it mirrors the VA and the they will be pissed especially when they have to pay for it. No more subsidies, no more medicaid freebies.

IMHO it is this:

Over the past 200 or so years, Congress members have discovered that it is personally more enriching to satisfy their big donors than to satisfy the people that elected them. They can always lie to the voters ahead of the next election.

We have a full bag of rich, old, professional politicians…screwing the voters and pampering the lobbyists, most of which have plenty of cash to distribute.

Term limits would help greatly to ease this problem, but term limits will be hard to achieve because those being limited will have to vote for it.

Conservatives and liberals in the public sector are both mired in the muck created by their own elected officials. It is no wonder that government is seen as the biggest problem we have…it generates most ALL of the other problems we have.

The way it works.

We have a senator that worked for a corporate raider. His payday for the last deal was 24 million bucks. On to politics. His net worth today over 60 million bucks.

And the stupid people keep re-electing him.

One could say. The article didn’t.

I don’t disagree at all. But here we are all assuming.