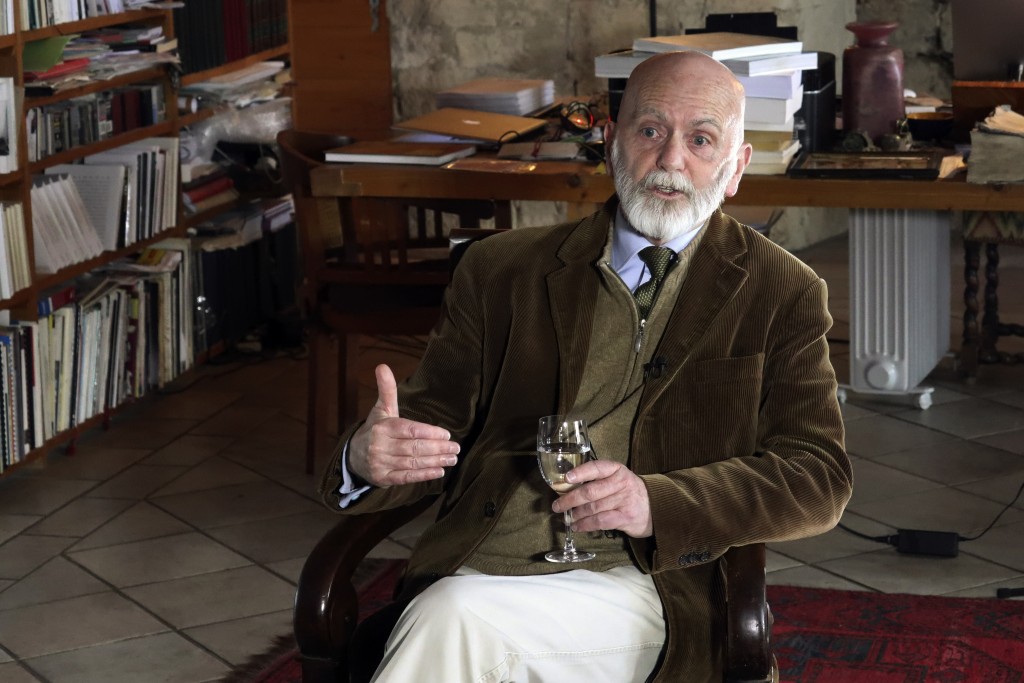 He is known for the theory of the “Great Replacement”, a theory that claims a global elite is colluding against the white population of Europe to replace them with non-European peoples.

Here is the essay that got him in trouble with the elites:

Immigration has become an invasion, an invasion of migratory submersion. France and Europe are a hundred times more colonized, and more seriously, than they have ever colonized themselves. Irreversible colonization is demographic colonization by transfer of population.

Some say that there is no colonization because there is no military conquest. They are wrong. The army of conquest is the delinquents big and small, all those who make life impossible for the French by harming them in every way imaginable, from the too famous incivilities to terrorism, which is only an extension . All the perpetrators of attacks made their debut in common law delinquency. There are also no terrorists. There is an occupant who, from time to time, executes some hostages, we, as all the occupants have always done. I call occupants all those who declare themselves such, or appear as such by their behavior.

The change of people, ethnic substitution, the Great Replacement, are the most important event in the history of our country since it exists, since with another people history, if it continues, will no longer be that of France. France has always wonderfully assimilated individuals who wanted to be, it cannot assimilate peoples, and even less hostile, vindictive, even hateful and conquering peoples. It takes a nameless vanity, and a total ignorance of what a people is, to imagine that with a changed population France would still be France. All the words are liars but the most liar of all is that of French, alas. There are no French jihadists, for example. If they are jihadists they are not French.

To believe that there are only French people in France is a total illusion. There are invaders and invaders, colonizers and colonized, occupiers and occupiers.

We cannot put an end to colonization without the departure of the colonist: Algeria in its time showed it enough, alas - a good opportunity for us to underline, moreover, the difference in civilization.

One does not end an occupation without the departure of the Occupant. There is no other way out than remigration. The same people who declare it impracticable want to bring forty million migrants to Europe, if not two hundred million. They proclaim the man who has entered an era of general migration. Let it migrate and migrate, then. What is possible in one direction must be possible in the other, with more means and gentleness.

The time is no longer for politics, elections, parties. 2022 is too far, the change of people will then be too advanced, the replacements will be the arbiters of the situation, unless they are completely masters of it. And there is, in any case, no chance of ever winning a game in which the opponent has all the cards and of which he has fixed all the rules. Power, its banks, its judges and its media want ethnic substitution. They do not protect us from it, they organize it and promote it. They drugged the people to accept it, by teaching them to forget, deculturation, censorship, repression and permanent injections of self-hatred. They do not import workers, especially since there is no work and there will be less and less. They import future consumers,

You say that these future consumers have no money. Think again, tomorrow they will have yours, because the so-called social transfers are, in truth, little more than ethnic transfers. Europe is the first continent to pay for its own colonization.

A specter haunts Europe and the world. It is replacement, the tendency to replace everything with its normalized, standardized, interchangeable double: the original by its copy, the authentic by its imitation, the true by the false, mothers by surrogate mothers, culture by leisure and entertainment, knowledge through diplomas, the countryside and the city through the universal suburbs, the native by the non-native, Europe by Africa, the man by the woman, the man and the woman by robots, peoples by other peoples, humanity by a haggard, undifferentiated, standardized posthumanity, thank you.

Of all the genetic manipulations, the Great Replacement, a kind of GPA applied to the whole planet, is the worst. The genocide by substitution, in the words of Aimé Césaire, is the crime against humanity of the twenty th century. It is, moreover, very strange that environmentalists should stop humans from commendable concern for biodiversity.

Replacism is now considered strong enough to directly take over the management of the human fleet, without intermediaries. In France, Emmanuel Macron, who is around the world, with Justin Trudeau, the most accomplished representative, has already neutralized the microcosm, sent back to their homes the main actors of French political life for thirty years, populated the Assembly of puppets in his pay, made up of a meeting government, shattered all the major parties. It does not govern, it manages, as it would a bank or a limited company.

He left politics through economics, finance and business management. We want to get out of it through history. The question of the independence or the subjugation of a great nation, of the survival or the disappearance of a great civilization, it is not politics, that: it is history. Charles de Gaulle - whom we celebrate today near his grave, for the anniversary of his death -, Charles de Gaulle in London, it was not politics. Jean Moulin in Lyon was not politics. Neither Joan of Arc in Chinon, nor Gandhi in Calcutta, nor any of those who stood up for the independence of their country and for the dignity of their people.

What we need today is not a new party, not even a union of the rights: the rejection of replacement totalitarianism is no less from the left than from the right. What we need is the gathering of all those who oppose Islamization and the African conquest. What is needed is a National Council of Resistance, of European resistance, because all the European nations are invited to lead alongside us the fight for the salvation of our common civilization, Celtic, Slavic, Germanic, Greco- Latin, Judeo-Christian and free-thinking.

My friend Karim Ouchikh, president of SIEL, and I, Renaud Camus, decided to constitute precisely that, a CNR, or CNRE. We will publicly offer to join us with all the personalities who seem to us animated by the same desire to save our country and we will thus enlarge our committee, by cooptation. But all French and all Europeans who think like us are invited to get in touch with us and give us their support. The goal is to build a force such that it is ideally useless to use it.

That said, if unfortunately it happened that the only alternative that was left to us was submission or war, war then, a hundred times. Besides, there would be nothing civil about it, despite the number of collaborators and traitors. It would rather be part of the great tradition of fighting for the right of peoples to self-determination, for the liberation of the territory and for decolonization. We must finally get out of the colonial era, which our colonizers tell us so badly while colonizing us. It is necessary to stop once, if possible above the Mediterranean, the crazy pendulum of colonizations and counter-colonizations.

I wonder who could be behind jailing someone who is trying to awaken his own people…who are being treated as slaves.

Hmm funny that this took place in France and they arrest someone to silence their free speech! A place that gave the world the French intellectuals of “Post Modernism” such as Derrida, Lyotard, Foucault, Baudrillard, who are responsible for destroying Western values and society and were known Marxists yet they were never arrested. What is next? Book burning?

This is absolutely disgusting. First of all, his ideas are 100% correct when compared to what is ACTUALLY happening with the literal invasion of third world into France and all of Europe.

Usually when things like this happens, only means that the ones speaking out hit on the nerve of truth that has panicked the ones behind the sinister plan. Arresting this author only gives credence to his assertions and thus as news of his arrest spreads so too does his words! In other words it’s most certain to have the opposite effect that the authoritarians are hoping to achieve!

I may not be as worldly as some…but after reading that I can’t see how anyone would take issue with what the man has to say. He’s not wrong. The way of life that our forefathers fought and died for both here and in Europe is being destroyed all to make the Starbucks crowd feel good about themselves.

He has been offered a chance to renounce his speech and to give 1800 euros to a state-approved “anti-racist” pro-multiculturalism organization. If he complies right now to these terms he can still avoid prison. 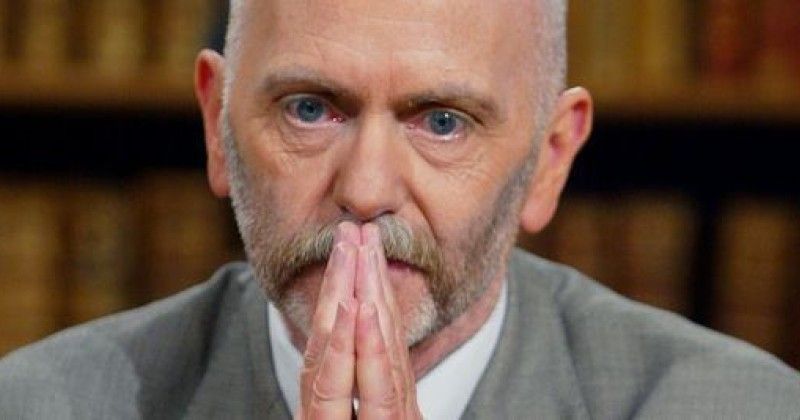 French Intellectual Sentenced to 2 Months in Prison For Calling Mass...

French intellectual Renaud Camus has been given a 2 month suspended prison sentence for saying that mass immigration into Europe represents an “invasion.”Camus will only avoid jail by paying 1800 euros to two “anti-racist” organizations, SOS Racisme... 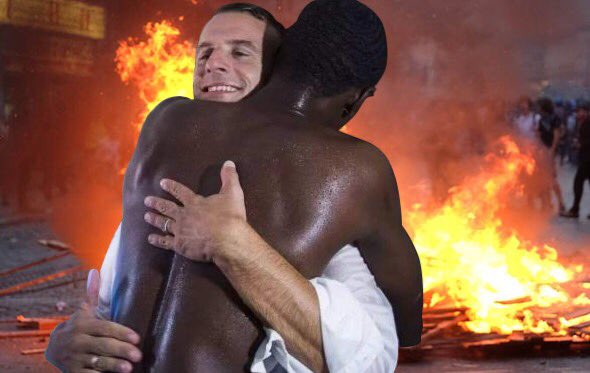 If he truly means his words then you go to prison for it! Is he a man or is he a mouse?