A publicity stunt or a legitimate movement? You decide.

Some looked on puzzled while others grew concerned when a group of propeller planes circled the Statue of Liberty before dusk Wednesday pulling banners that said: “Congratulations to federal state of new China!” in English and Chinese.

What was it about?

In a live stream from a boat in New York Harbor on the anniversary of the 1989 anniversary of the Tiananmen Square massacre, Guo said that "from today the Chinese Communist Party (CCP) will no longer be the lawful government of China.”

Bannon, meanwhile, said a renegade organization that calls itself the “Rule of Law Movement” aims to “rid the Chinese Communist Party of its dictatorship over the Chinese people” and replace it Western law such as is in Great Britain and the United States.

Witnesses counted at least eight dozen planes circling Lady Liberty behind both men for nearly 45 minutes. The banners bore stars in the form of the nuclear symbol along with their message.

“The elimination of the Chinese Community Party is essential…to bring peace to the international community and all mankind,” Bannon said while reading a “Declaration of the New Federal State of China.”
Bannon, who left the White House in 2017 after a falling out with President Trump, called the CCP “a gangster organization with no legitimacy” that has killed its own people and “unleashed” the coronavirus on the world while “covering up the truth and spreading the virus to 180 nations worldwide.”

Besides oppressing its own people, he said, the Chinese Community Party threatens the security and primacy of the West.

Chinese citizens throughout the world contributed to the declaration over the past six months, said Bannon, who’s broadcast a radio show critical of the CCP from Guo’s Manhattan apartment.

He predicted that 90 nations on Thursday would join the movement to de-legitimize the CCP.

A conservative documentary filmmaker who spent time as an investment banker at Goldman Sachs, Bannon was executive chairman of Breitbart News for four years before running Trump’s successful 2016 presidential campaign.

He more recently has been working closely with Guo, who is being sought by Beijing for extradition from the United States on charges of money laundering, bribery and rape.

Wednesday’s declaration marked “the turning point for the necessary steps in terminating the Chinese Communist Party by justice and rule of law,” Guo said.

“The ANTIFAan American terrorist group, operated by The Communist International, is working along with the CCP, carrying out a series of attacks in the past couple of days to mess up the United States and the West,” said Guo, who fled China in 2014.

“While the CCP-virus pandemic is still spreading around the world, CCP is coordinating its allies from Africa, the Middle East, to certain Northern European countries, especially North Korea, Cuba to create troubles for the United States, aiming to make the United States and Europe kowtow to it to solve the ‘problem’,” he said.

“President Trump will crash the ANTIFA riots in the following days, and no one can mess up the United States.”

Guo owns G News, a website that earlier this year published fake news bout the CCP creating COVID-19 in a laboratory. Although false, the story had more than 19,000 tweets and 18,000 Facebook engagements before PolitiFact shot it down.

G News is best known for an unfounded story that the coronavirus was stolen from a lab in Canada. 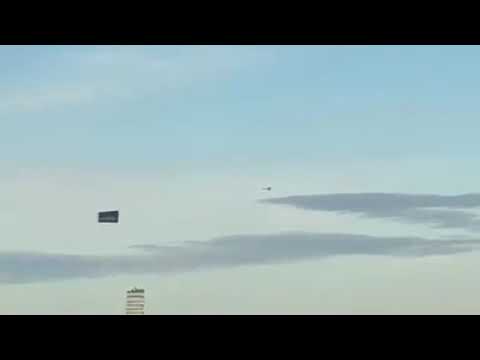 Some looked on puzzled while others grew concerned when a group of propeller planes circled the Statue of Liberty before dusk Wednesday pulling banners that said: