Discuss: should felons be allowed to vote? This will add roughly 1 millions of new “voters” to Florida.

TALLAHASSEE — A federal judge ruled Sunday that it is unconstitutional to prevent felons in Florida from voting because they can’t afford to pay back court fees, fines and restitution to victims, striking down parts of a law passed by Republican lawmakers and signed by Gov. Ron DeSantis last year.

Calling the law a “pay-to-vote system,” U.S. District Judge Robert Hinkle’s 125-page ruling declares that court fees are a tax, and it creates a new process for determining whether felons are eligible to vote.

With one sentence, Hinkle also allowed two large groups of felons to register to vote: those who were appointed an attorney for their criminal case because they couldn’t afford one on their own, and anyone who had their financial obligations converted to civil liens.

Most felons are appointed attorneys, and nearly all have their court fees and fines converted to civil liens.

For all other felons who can’t afford to pay their financial obligations, Hinkle ordered state officials to adopt a new process for determining whether felons are too poor to vote: they can request an advisory opinion from the Secretary of State Laurel Lee.

If Lee can’t issue the opinion within 21 days of receipt — and tell the felon how much fines and restitution to victims they owe, and how the state came up with that amount — they can’t stop the felon from registering to vote, Hinkle wrote.

He said that process would be simple and fast for most cases, since most convictions do not require felons pay back court fines — such as $50,000 for a drug trafficking charge — or restitution to victims.

“In most cases, the Division (of Elections) will need to do nothing more on (legal financial obligations) than review the judgment to confirm there is no fine or restitution,” wrote Hinkle, who was appointed to the U.S. District in 1996 by President Bill Clinton. “In the remaining cases — the cases with a fine or restitution — the overwhelming majority of felons will be unable to pay.”

But for some cases, it will be an impossible burden for the state to meet. An eight-day trial showed that for many older convictions, it’s impossible to determine how much in restitution or fines someone owes.

“That the Director of the Division of Elections cannot say who is eligible makes clear that some voters also will not know,” Hinkle wrote.

Hinkle’s ruling is expected to be appealed. A spokeswoman for DeSantis said the state was reviewing the decision.

The decision could have important effects on the November presidential election in the nation’s largest swing state. Florida has more than 1 million felons, although the state has not yet seen a dramatic rise in registrations from felons after Florida voters passed a constitutional amendment in 2018 that allowed most who had completed their sentences to register to vote.

Carl Tobias, a professor at the University of Richmond School of Law, called Hinkle’s Sunday ruling “perhaps the most important ruling in the U.S. now ahead of the November election."

And it was praised by the American Civil Liberties Union and other groups that sued DeSantis and state elections officials last year.

Restitution, for example, is typically paid to the victim, and no entity in the state tracks it. It can be almost almost impossible for felons to determine how much they owe if the victim is dead or if the victim is a business that is no longer in business.

“Indeed, there may be nobody to pay, even if a felon is willing and able to make a payment. Insisting on payment of amounts long forgotten seems an especially poor basis for denying the franchise,” he wrote. “The requirement to pay, as a condition of voting, amounts that are unknown and cannot be determined with diligence is unconstitutional.”

Hinkle’s ruling is just the latest turn in the story of Amendment 4, which was approved by nearly two thirds of voters in 2018. The amendment was intended to reverse the state’s Jim Crow-era law barring felons from voting and was the nation’s largest expansion of voting in decades.

With DeSantis’ encouragement, the Republican-controlled Legislature in 2019 drew a hard line. Lawmakers passed a bill defining “all terms” to include all court fees, fines and restitution associated with a case.

Those costs, at a minimum, are hundreds of dollars — amounts that many felons can’t, and don’t, pay. 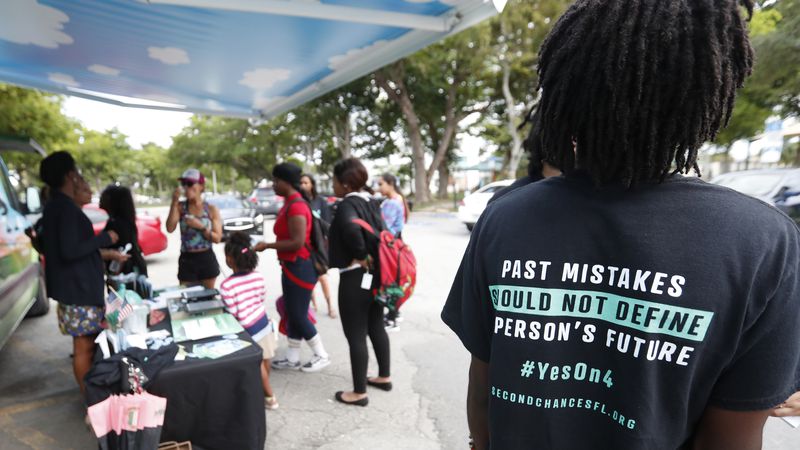 U.S. District Judge Robert Hinkle ruled against a Florida law limiting the scope of Amendment 4, a 2018 ballot measure allowing most felons to vote. He called the law, which he mostly struck down, a “pay-to-vote system”

Hell no. They lost that right when they decided to become criminals and victimize law-abiding citizens.

should felons be allowed to vote?

Are they trustworthy ? If so why can’t they carry a firearm ? I say HELL NO TOO !

Simple solution, go back to the old system under which all felons were barred from voting for life.

Apparently not according to the federal judge. Anyway, such disenfranchisement was not established by the founders in the constitution…

You might want to check your constitution as to how restrictive voting rights were when established by the founders.

Voting always has been and always will be a heavily restricted privilege afforded only to eligible US citizens.

Yeah - you should go read what the document that you are citing says about voting. You might learn something.

Did you want to dispute my claim that the founders didn’t disenfranchise felons?

Monte is incapable of learning anything.

Isnt this the call of individual states/

It is but the issue of felons being barred from voting is predicated on the fines being imposed as conditional which the judge clearly outlined in his dissenting opinion. IMO it’s pretty stupid on the states part to have legislated that clause to begin with when the two are separate issues. Remove the clause and it’s a simple fix.

Federally voting was restricted to white male landowners and each of the states established their own eligibility requirements.

The denial of voting rights for certain felonies began in Kentucky in 1792 and expanded from there.

I actually support the restoration of rights for some felons but only after they have fully atoned for their crimes including restitution and fines.

If this ruling stands, and it very well could the affected states will simply revert to the old system under which the loss of the right to vote is permanent for all felons except those exempted specifically by the new statutes.

Yes, as the framers made no such exemptions for felons when they drafted the constitution.

If this ruling stands, and it very well could the affected states will simply revert to the old system under which the loss of the right to vote is permanent for all felons except those exempted specifically by the new statutes.

Here is a more detailed deep dive on this topic. 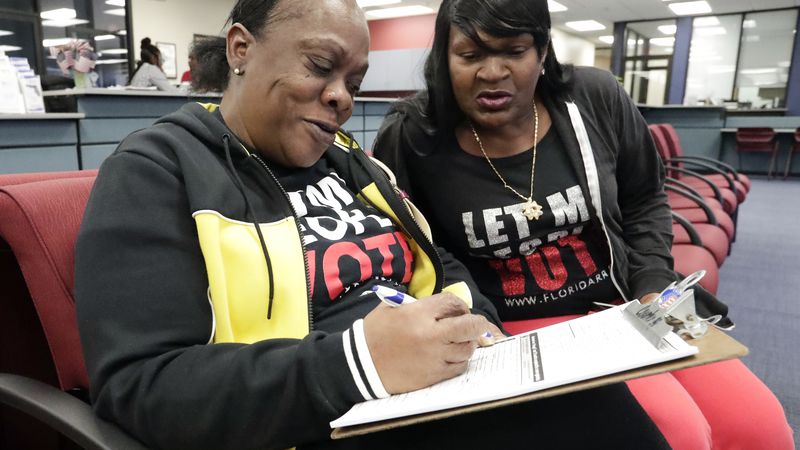 ’A game-changer’: Five takeaways from Sunday’s ruling on felon voting

The 125-page ruling covered a lot of ground and made national headlines, for several reasons. Here’s what you need to know.