Evola was an Accelerationist 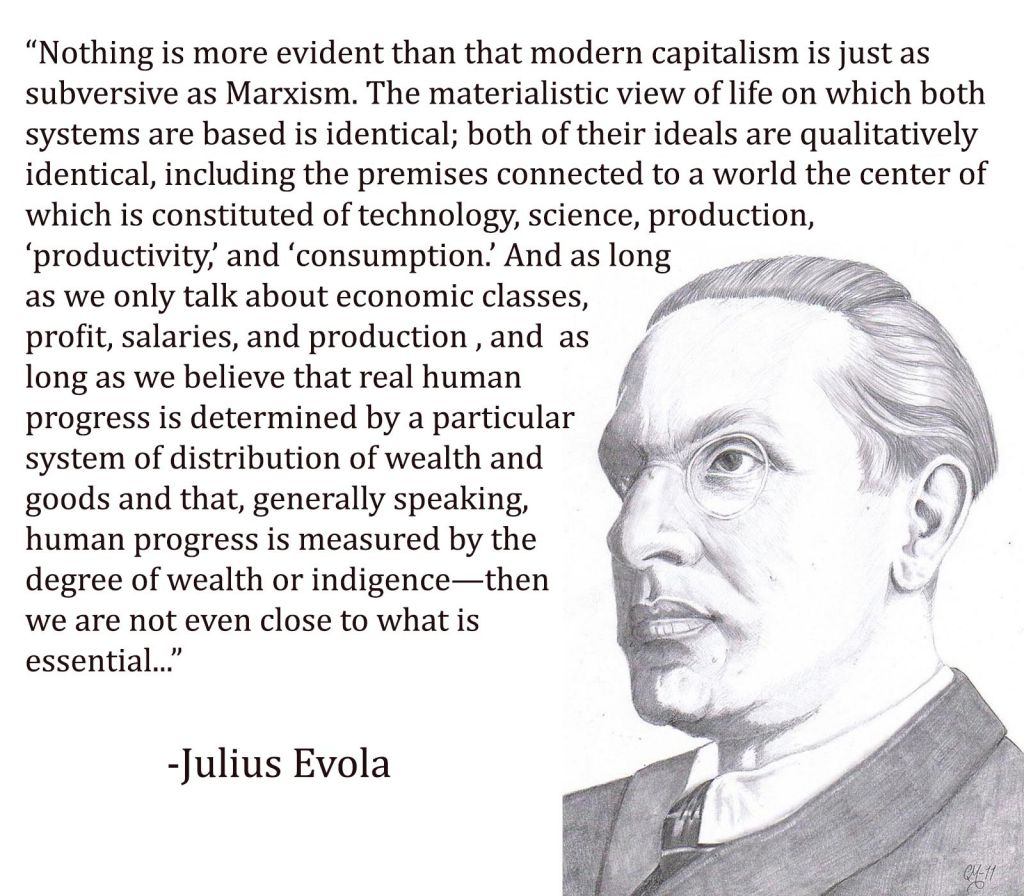 A critical passage from “Ride the Tiger” that all interested in this movement should read:

“The trans-formations that have already taken place go too deep to be reversible. The energies that have been liberated, or which are ίη the course οf liberation, are not such as can be reconfined within the structures οί yesterday’s world. The very fact that attempts at reaction have referred to those structures alone, which are void οί any superior legitimacy, has made the subversive forces all the more vigorous and aggressive. Ιη the second place, such a path would lead to a compromise that would be inadmissible as an ideal, and perilous as a tactic.”

"As Ι have said, the traditional values ίη the sense that Ι understand them are not bourgeois values, but the very antithesis οf them. Thus to recognize any validity ίη those survivals, to associate them ίη any way with traditional values, and to validate them with the latter with the intentions already described, would be either to demonstrate a feeble grasp οf the traditional values themselves, or else to diminish them and drag them down to a deplorable and risky form οί compromise.

Ι say “risky” because however one attaches the traditional ideas to the residual forms οί bourgeois civilization, one exposes them to the attack-in some respects inevitable, legitimate, and necessary-cur-rently mounted against that civilization.

One is therefore obliged to turn to the opposite solution, even ίί things thereby become still more difficult and one runs into another type οf risk. It is good to sever every link with all that which is destined sooner or later to collapse. The problem will then be to maintain one’s essential direction without leaning οη any given or transmitted form, including forms that are authentically traditional but belong to past history. Ιη this respect, continuity can only be maintained οη an essential plane, so to speak, as an inner orientation οί being, beside the greatest possible external liberty.

As we shall soon see, the support that the Tradition can continue to give does not refer to positive structures, regular and recognized by some civilization already formed by it, but rather to that doctrine that contains its principles οηlΥ ίη their supe-rior, preformal state, anterior to th~ particular historical formulations: a state that ίη the past had ηο pertinence to the masses, but had the character οf esoteric doctrine.

For the rest, given the impossibility οf acting positively ίη the sense οf a real and general return to the normal system, and given the impossibil-ity, within the climate οί modern society, culture, and customs, οf mold-ing one’s whole existence ίη an organic and unitary manner, it remains to be seen οη what terms one can accept situations οf utter dissolution without being inwardly touched by them. What ίη the current phase-which is, ίη the last analysis, a transitional one-can be chosen, sepa-rated from the rest, and accepted as a free form οf behavior that is not outwardly anachronistic? Can one thus measure oneself against what is most advanced ίη contemporary thought and lifestyle, while remaining inwardly determined and governed by a completely different spirit?

"The advice “Don’t go to the place οf defense, but to the place οf attack,” might be adopted by the group οf differentiated men, late chilldren οf the Tradition, who are ίη question here. That is to say, it might be better to contribute to the fall οf that which is already wavering and belongs to yesterday’s world than to try to prop it up and prolong its existence artificially. It is a possible tactic, and useful to prevent the final crisis from being the work οί the opposition, whose initiative one would then have to suffer. The risks οf such a course οf action are more than obvious: there is ηο saying who will have the last word.

But ίη the present epoch there is nothing that is not risky. This is perhaps the one advantage that it offers to those who are still οη their feet. The basic ideas to be drawn from what has been said so far can be summarized as follows: The significance of the crises and the dissolutions that so many people deplore today should be stated, indicating the real and direct object οί the destructive processes: bourgeois civilization and society. But measured against traditional values, these latter were already the first negation οί a world anterior and superior to them. Consequently the crisis οί the modern world could represent, ίη Hegel’s terms, a “negation οί a negation,” so as to signify a phenomenon that, ίη its own way, is positive. This double negation might end ίη nothingness-ίη the nothingness that erupts ίη multiple forms οί chaos, dispersion, rebellion, and “protest” that characterize many tendencies of recent generations; or ίη that other nothingness that is scarcely hidden behind the organized system οί material civilization. Alternatively, for the men ίη question here it might create a new, free space that could eventually become the premise for a future, formative action. "

More word salad to repackage old ideas into making an argument on the tried measures of thought! Unoriginal and nothing new. There are still opposites and man has yet to define a third which so far has failed. All arguments of right and left, socialist (Marxism) vs. capitalist are outdated concepts. Mans greatest predator is himself and thus the cycle continues along ideological fronts for thousands of years!

You have obviously never read Evola. It’s funny, 99% of the people that talk about Evola have never read Evola. Now that we have that established, go run along and find one of the thousand or so “rah rah rah Trump 4d chess libtards btfo” threads that you are clearly more at home in. A thread like this actually requires a fair amount of intellectual rigor. You might have to stop the Trump bootlicking for more than 5 minutes to actually engage.

Anyway - as to the actual substance of Evola, @skull you are on the right track. The single most important thing to learn from Evola’s writing are not his theoretical approaches on traditionalism etc… it’s the concept of “cavalcare la tigre”, “riding the tiger”. Surviving amidst a sea of degeneracy. As long as you don’t let Kali Yuga in your heart, you cannot be broken. That is the lesson Evola teaches us.

Also, about Evola, much of what he wrote will be completely incomprehensible without prior knowledge of Plato, Plotinus, Marcus Aurelius, Epictetus, the New Testament, St Augustine, Meister Eckhart, the Bhagavad Gita, the Dhammapada, Schuon, and many others. He’s to be taken as commentary on the source material rather than read cold.

Thanks, this just helped me with some of the sections that I am struggling with. Evola writes as if the reader is as familiar with the concepts of these great works as he is. When he gets going down the road of an idea I find myself having to stop, research, and start over. It’s ok as I am learning more but having list of baseline sources to start with is most helpful.

Completely unrelated - I learned that Mussolini was terrified of Evola due to his levels of mysticism.

If you have not completed ALL OF THE ABOVE STEPS, please stop posting in this thread.

Blow me! You have no idea what these mean!

OMG …I bet they let you light the candles at the illuminati meetings.

Evola predicted that our movement would form.

“There is a superior unity of all those who despite all, fight in different parts of the world the same battle, lead the same revolt, and are the bearers of the same intangible Tradition. These forces appear to be scattered and isolated in the world, and yet are inexorably connected by a common essence that is meant to preserve the absolute ideal of the Imperium and to work for its return.”

― Julius Evola, Men Among the Ruins: Post-War Reflections of a Radical Traditionalist