There is an agenda to divide people on racial lines. This is done to create animosity and hate so that people, in general, will be distracted from actual crimes and coverups of the state or the powers that be. Beware, the racial division agenda can be presented eloquently and or bluntly. The bottom line of the agenda is division which weakens the unity of the citizens in total and strengthens those in power.

People of northern european ancestry have lower heating bills in the winter?

If those recent immigrants don’t like the cost associated with heating their residences, then they can move back to the warmer climates from which they came.

Everything is about a hand out now and pushing white guilt. What I don’t agree with in that video is when the man is talking about individualism. Yeah, I get it we need to be dependent on ourselves, but the only people who are trying to be individualists at this point are white people. Everybody else is coming together based on their race/religion and they are moving against whites. They want us to pay for everything and they want us to feel guilty for everything. I’m not going to have any of that!

They want us fighting one another instead of fighting them. However, when everyone is starting to form up in their collective little tribes and prepare for war, it’s only rational to do the same.

That’s it. And that’s exactly what we aren’t supposed to be doing which is why they constantly scream RACIST! They all want to join forces and take us down, while we pay for it. They honestly think we are all stupid leftists.

They honestly think we are all stupid leftists.

Rotflmao. No ones confusing the fringe right with leftists…

I’m not going to have any of that! 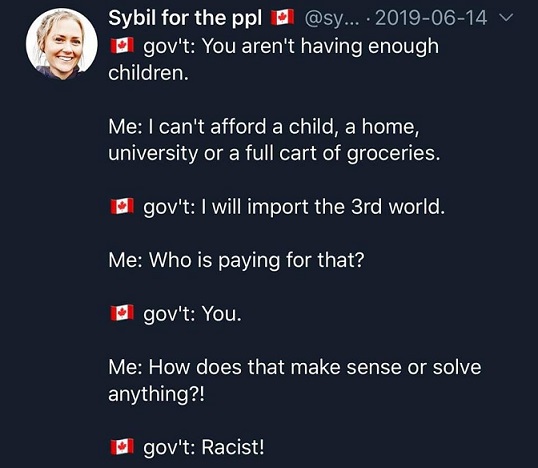