Today the real king,bought the farm. Drugs got the best of him. 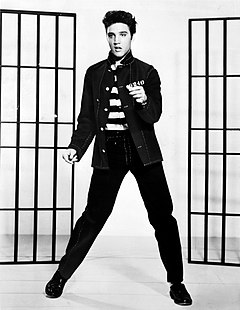 Elvis Aaron Presley[a] (January 8, 1935 – August 16, 1977), also known simply as Elvis, was an American singer, musician and actor. He is regarded as one of the most significant cultural icons of the 20th century and is often referred to as the "King of Rock and Roll" or simply "the King". His energized interpretations of songs and sexually provocative performance style, combined with a singularly potent mix of influences across color lines during a transformative era in race relations, led ...

He died of bowel obstruction syndrome due to drugs! The King died on the throne!

What a horrible way to go! He not only had the drug issue, but a very bad diet as well. Go get those greens!

Last year I read an excellent biography of Elvis. He was nothing more than a Southern Gentleman from Mississippi. His twin brother died at birth and later on his mother drank herself to death. He did well by serving in the Army.