Stumbled upon this video on youtube, and nothing but Wakandan music is playing through my head. Jokes aside, do you think that a economically viable and independent African country would alleviate the charity sinkhole that is Africa as a whole, and deter the new exploiting colonial power, China?

On the religious side, apparently the federation is 75% Christian, which again earn a yes vote from me. Thoughts? The East African Federation (Swahili: Shirikisho la Afrika Mashariki) is a proposed political union of the six sovereign states of the East African Community – Burundi, Kenya, Rwanda, South Sudan, Tanzania and Uganda – as a single federated sovereign state. In September 2018, a committee was formed to begin the process of drafting a regional constitution, and a draft constitution for the confederation is set to be written by 2021, with implementation of the confederacy by 2023. At 2,467,202 s...

It would never work. The majority of the Central and Southern portions of the continent never moved past mud huts. The infrastructure that is there is only because of colonization. Africa sits on the largest aquifer on Earth yet no one seems to know how to drill wells for drinking water.

Read up on Botswana, the poorest AND least educated country in Africa on being given independence.

As for this Federation, if they make the Left (rooted in Marx and the French Revolution as it is) their model they’ll fail just like all the post-colonial powers with Presidents for Life have failed. If they take inspiration from the likes of Adam Smith and George Washington as did the Botswanans they may have a chance.

I’m pessimistic because they’ll be offered foreign aid, something that seems to only encourage local corruption and reliance on men and institutions far away rather than God and yourself right where you are.

It would never work. The majority of the Central and Southern portions of the continent never moved past mud huts.

Theyll have to start somewhere.

I’m pessimistic because they’ll be offered foreign aid, something that seems to only encourage local corruption and reliance on men and institutions far away rather than God and yourself right where you are.

If they combine into one country, would the foreign aid be cut down to 1/6?

If it hadn’t been for centuries of Muslim slaving they’d have probably done much better. The poverty of a continent and the wealth of old Mali were not coincidental.

As for foreign aid, I doubt it’ll be cut down. Rather a cumulative pile of cash with flow into the hands of much the same bunch as before, only now it’ll be much more than any of them have been used to. Their eyes may bug out a bit. Graft may be impossible to avoid.

Rather a cumulative pile of cash with flow into the hands of much the same bunch as before, only now it’ll be much more than any of them have been used to. Their eyes may bug out a bit. Graft may be impossible to avoid

Probably. In my widest dream, I want to see this country succeeds, however, so they can start building walls to keep the zombie economic horde from down south from S. Africa, who had embraced socialism full-on. They’ll have to pull themselves up by the bootstraps, and I wish them well.

And to have a haven where the #blm activists can immigrate to. The real life Wakanda. 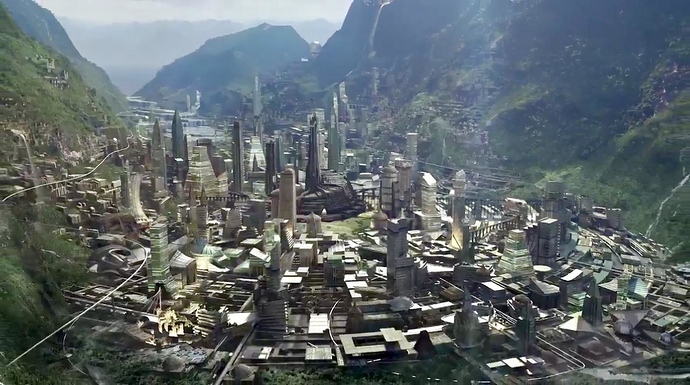 And to have a haven where the #blm activists can immigrate to. The real life Wakanda.

We tried this already when we gave them Liberia. We literally funded their country, built them a capital city, established their government, institutions, flag, anthem, etc. All they had to do was go there and run it. Total shithole in less than a decade and has been ever since. It’s never going to work.

The poverty of a continent and the wealth of old Mali were not coincidental.

Yet even Mali couldn’t get past mud huts. Even a really big mud hut is still a mud hut.

Actually, adobe construction is perfectly suited to the climate and uses resources economically. It also permits a minimum use of what would be locally expensive wood for construction. Even if wood was easily obtainable, for the conditions that form of construction is quite livable in the heat by day and cold by night.

Adobe is one of the oldest and most energy efficient forms of construction every devised.

This walls of locally produced stone, adobe, plaster etc are also incredibly eco friendly over all.

The biggest problem with that type of construction is that once countries start developing economically the labor costs go up astronomically.

There are some newer methods of making bricks from compressed clay, sand, cement etc using high pressure mechanical and hydraulic presses that are working extremely well though in the developing world because the reduce the labor costs significantly.

Africa is the richest continent on the planet in terms of natural resources, the problem is that corruption and tribal conflicts along with the spread of radical Islam are still keeping much of the continent in perpetual poverty.

For all of the evils of colonialism it was the best thing to ever happen to Africa.

There is a cure for what ails S. Africa and I hate to say it but we’ll probably see it erupt in the next ten years.

Well, provided it was the English being the colonials. The Germans were indifferent, the French not all that leaving long term issues after their departure and pity the hapless Africans under Belgian rule…

Even with all of the evils of colonialism it is what brought Africa out of the bronze age.

Absent colonization Africa would still resemble much of the Amazon Jungles developmentally.

The problem with all of the colonial powers is that when the colonies were no longer sustainable economically they simply abandoned them to their own fates leaving a native population that was still largely ignorant, incapable of governing itself, and with a seething hatred for the whites who remained.

Much of Africa, particularly the southern half is on the verge of an open race war and I expect it to blow up in the RSA in the next decade.

I guess the questions I would have after watching the video and reading the article is:

I remember a similar proposal offered by Momar Gaddafi in the form of the African Union, that had a lot of the same characteristics such as introducing its own governing body, its own currency, and advocating control of its own resources. On the latter Gaddafi wanted to use gold as a way to by-pass the "petrol-dollar and well we all know how that ended up. I am not saying that this is the same situation but only asking how their approach to this would be different. My fear is that throughout time another federation is another way to consolidate power and have more control much in how some view the EU today. I like this idea provided that a frame work can assure everyone involved is putting forth the idea for raising better prosperity for all. Better Healthcare, better schools, better trade and economic opportunities, better infrastructure and a system that provides fairness, and transparency. The more African nations seize their own resources and stop the infiltration of foreign countries who seek to rob them of what belongs to them in exchange for building infrastructures such as what China has done, the sooner they can start addressing their own challenges that threatens their own survival and reclaim what is theirs.

IMO the best solution to addressing the current migrant crisis seen in Europe and the United States, is fostering a narrative of encouraging more development and investment in the countries in which migrants come from. Naturally if the people who come from these places see Africa rising along the lines of economic prosperity (the same can be said of South American countries) the movement of returning home would happen naturally and thus also limit conflicts we see in its current manifestation!

If leftists don’t ruin the people there, they have a chance.

And then there is this… they are impatient to get what the western world took centuries to build. So they take the crumbs and refuse that falls off the Western table. Not sure how to solve that problem. Its evident even in “human success” stories that we see and hear. They are wearing clothes thrown away by others. They are repurposing junk that was built by other societies and then discarded when it wore out. “The Boy Who Harnessed the Wind” is perfect example of this.
Americans with European heritage lived in mud huts or sod huts too. But they somehow progressed beyond that. How?

Well, no one was helping them just because they were there and no federal “Officers to harass our people and eat out their substance.” from afar.

So they had to rely on themselves, their congregation and maybe immediate community without compulsion to give and real cause for gratitude for what they received. This not only would tend to make them productive and self reliant people but also decent people.

By comparison, the welfare state by encouraging feelings of entitlement to other people’s stuff can produce ungrateful pukes more able to find excuses than their forebears.

Unless and until those broken countries fix themselves the “migration crisis” is going to just get bigger every year.

I suspect they are planning some sort of Confederacy where each state remains sovereign but who knows.

Africa is incredibly rich in natural resources but most countries are still unable to get past their ancient tribal hatreds and more recent insurgence of Marxism.

Beyond that is the problem of corruption which is rampant across the continent.

Worse, we have the rise of AQ, ISIS, and other radical Islamic factions.