In a prepared statement, City Hall said, “For months, this administration, on its own, has safely and efficiently provided shelter, health care, education, and a host of other services to more than 13,000 people, predominantly from Central and South America who are seeking a better life.”

“As the number of asylum seekers arriving in New York City has increased exponentially in recent weeks, we do not yet have a figure to share, but we have spoken to the federal government about reimbursement and they have said they want to expedite our reimbursement requests as they are put in,” the statement added.

The White House didn’t immediately respond to a request for comment.

In a 2-1 decision on Tuesday, the 2nd U.S. Circuit Court of Appeals in Manhattan asked an appeals court in Washington to weigh in on whether the laws of that district shielded Trump from liability.

But the Manhattan court also accepted Trump’s argument that he qualified as a U.S. government “employee” when he allegedly defamed Carroll, a condition underlying his immunity claim.

A dissenting judge, Denny Chin, would have let Carroll pursue “at least some” claims, saying “Carroll’s allegations plausibly paint a picture of a man pursuing a personal vendetta against an accuser.”

Carroll sued Trump in November 2019, and had been hoping to go to trial as soon as next February.

She had accused Trump in a June 2019 book excerpt of having raped her in late 1995 or early 1996 in a dressing room at the Bergdorf Goodman department store in midtown Manhattan.

Trump, then in his third year in the White House, responded to her accusations by telling a reporter he did not know Carroll, that “she’s not my type,” and that she concocted the rape claim to sell her book.

Alina Habba, a lawyer for Trump, said in a statement she was “extremely pleased” with Tuesday’s decision, saying it would “protect the ability of all future presidents to effectively govern without hindrance.”

Roberta Kaplan, a lawyer for Carroll, said in a statement she was “confident” the District of Columbia court would let the case proceed.

On Sept. 20, Kaplan said Carroll planned to sue Trump for battery and inflicting emotional distress even if the defamation claims were thrown out.

‘WE DO NOT PASS JUDGMENT’

Trump claimed he was shielded from Carroll’s lawsuit by a federal law immunizing government employees from defamation claims.

He also said letting the case proceed could unleash a flood of frivolous lawsuits whenever presidents spoke.

U.S. District Judge Lewis Kaplan had found that Trump was not a government employee, and that even if he were, he exceeded the scope of his employment when talking about Carroll.

Asking the D.C. Court of Appeals to address the second issue, Circuit Judge Guido Calabresi said the district’s law was “genuinely uncertain” and the matter was “of extreme public importance.”

“We do not pass judgment or express any view as to whether Trump’s public statements were indeed defamatory or whether the sexual assault allegations had, in fact, occurred,” he wrote.

Chin, in his dissent, said Trump was not serving “any purpose of the federal government” when he discussed Carroll.

“In the context of an accusation of rape, the comment ‘she’s not my type’ surely is not something one would expect the President of the United States to say in the course of his duties,” Chin wrote.

The case became more complex in 2020 when the Department of Justice, acting at the behest of then-Attorney General William Barr, sought to substitute the government as the sole defendant.

That would have ended Carroll’s case, because the United States had not waived its immunity from defamation claims.

In a somewhat surprising move, the Biden administration essentially adopted its predecessor’s argument, while criticizing Trump for making “crude and offensive comments” in response to Carroll’s “very serious” accusations.

Summer Zervos, a former contestant on Trump’s reality television show “The Apprentice” who accused him of sexual assault, ended her own defamation lawsuit against Trump last November. Trump had called her claims a “hoax.” 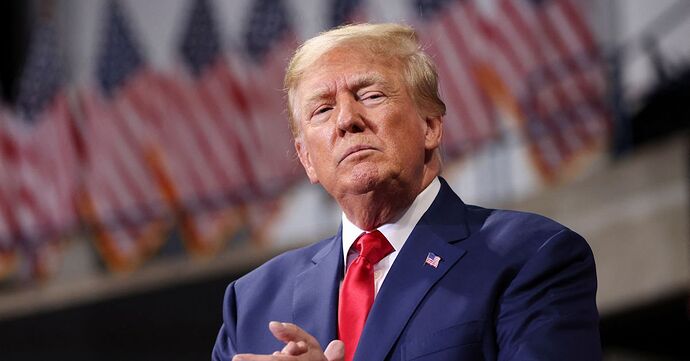 A federal appeals court set aside a judge's ruling that Donald Trump could be sued for defamation by E. Jean Carroll after denying he raped her, though it stopped short of declaring the former U.S. president immune from the author's lawsuit.

Next will be that Trump uses too much toilet paper!

What a stupid claim. Donald Trump has never had a problem getting pussy. He doesn’t need to force any woman to do anything and never has. Before he became president newspapers in the NYC area reported daily on his sexual escapades for decades and everyone loved it.

Come on guys. Throughout his entire adult life, Donald Trump has been accused of sexual misconduct by numerous women. In some cases, he has been caught on tape bragging about his perverted exploits. In others, women have come forward with credible stories of unwelcome advances and outright assault. And yet, despite all of the evidence, Trump has maintained his innocence, dismissing his accusers as “liars” and " losers." But the truth is that Donald Trump is a serial sexual predator who has preyed on countless women over the years. His history of predatory behavior speaks for itself, and it’s time for him to be held accountable.

The women who have bravely come forward deserve to be believed, and it’s time for justice to be served. No one should mock this woman because, once again, Donald slimed his way out of this. I believe her and she is the victim here, not him.

Any evidence of any of this? Or are you just a classless fool?

Most of us “men” can be accused of the same. I know I have had my share of sexual misconduct in my younger years. I’m old now. I still love women, but I don’t bother any more…lol.

has been accused of sexual misconduct by numerous women.

Did you mean Bill Clinton ???