Disney bans grieving father from having Spider-Man on son's grave

A grieving father has been denied permission to put a picture of Spider-Man on his little boy’s grave because Disney wants to preserve the ‘magic’ of its characters. Marvel superfan Ollie Jones, four, died from a rare genetic disorder last year and was given a Spider-Man themed funeral, featuring a horse-drawn carriage decorated in red and blue balloons. The little boy, of Maidenstone, Kent, had suffered with leukodystrophy for two years and his last holiday had been to Disneyland to meet his favourite superhero. His dad Lloyd Jones asked the council for permission to get an etching of Spider-Man on Ollie’s gravestone as he wanted the image to remind him of his son. Council officials told Lloyd to contact the Walt Disney Company, which owns the Marvel franchise.

But Disney refused to give the go-ahead because the company wanted to preserve the ‘innocence’ and ‘magic’ around its characters. The rejection email from the US-based giant instead offered the devastated family a personalised celluloid frame – effectively an action frame taken from a comic or film – showing a scene from Spider-Man, with a hand-written message to Ollie. Dad-of-six Lloyd said: ‘I really wasn’t expecting this – it’s another massive blow. ‘I felt sure they would allow it.’ Lloyd said the movie giant is trying to ‘disassociate their characters with death’ and felt the decision was ‘about money.’ He added: ‘That makes no sense to me – characters die in their films all the time. ‘I think this is all about money. ‘Ollie’s last holiday was at Disneyland. He loved Spider-Man and we had bought him all the toys.

‘But now he has died and we won’t be spending any more money, they don’t care.’ Ollie’s sister Laillah, 6, also suffers with leukodystrophy – a rare genetic disease that damages the brain, spinal cord and often the peripheral nerves – which the little boy died from in December. Writing on Facebook to rally support to reverse the decision, Lloyd said: ‘Kids only matter to Disney when they’re alive and spending money with them.’ Lloyd’s brother Jason Jones, contacted Disney on his behalf because the dad was struggling to deal with his son’s death. A representative from The Walt Disney Company’s permissions department wrote: ‘We extend our sincere condolences. If we played a small part in Ollie’s happiness we are honoured. ‘Generations of fans have responded to our characters with the same wonder and delight that Ollie did. In fact, many believe the characters to be real.

‘We have striven to preserve the same innocence and magic around our characters that brought Ollie such joy. ‘For that reason, we follow a policy that began with Walt Disney himself that does not permit the use of characters on headstones, cemetery or other memorial markers or funeral urns. ‘Although we cannot grant the family’s request, we would be pleased to commemorate your nephew with a hand-inked, hand-painted, personalized cel that recognises his love for Spider-Man, which will read: ‘For your ——- (nephew’s name), Thank you for letting us share in the magic of your life. Your friends at the Walt Disney Company. ‘We feel privileged to have had him as a fan. [sic]’ Ollie’s uncle Jason said: ‘This meant everything to us. My brother’s life has been shattered, it has shattered the whole family. ‘We can’t move on until we have his headstone done – Spider-Man was Ollie’s entire life. He loved it so much.

‘I didn’t expect it to be an issue – my funeral director, who’s also my friend called me and told me they can’t do it. I thought he was joking at first. ‘We understand copyright but I don’t see why Marvel would have any issues with this.’ An online petition by Lloyd’s old school friend Michael Farrow urging Disney to change its mind has gained almost 1,900 signatures. Maidstone building firm Gallaghers has also offered to donate the headstone if permission is granted.

A Maidstone Borough Council spokeswoman said they would do everything they could to help the family. She added: ‘Maidstone Borough Council is trying to help a family who have asked whether they can place a Spider-Man headstone at the grave of their young son. ‘Sadly, these types of stones have to adhere to copyright and while we understand this is a very emotional time for the family we have made contact with Marvel to ensure the family are complying with their terms and conditions.’ 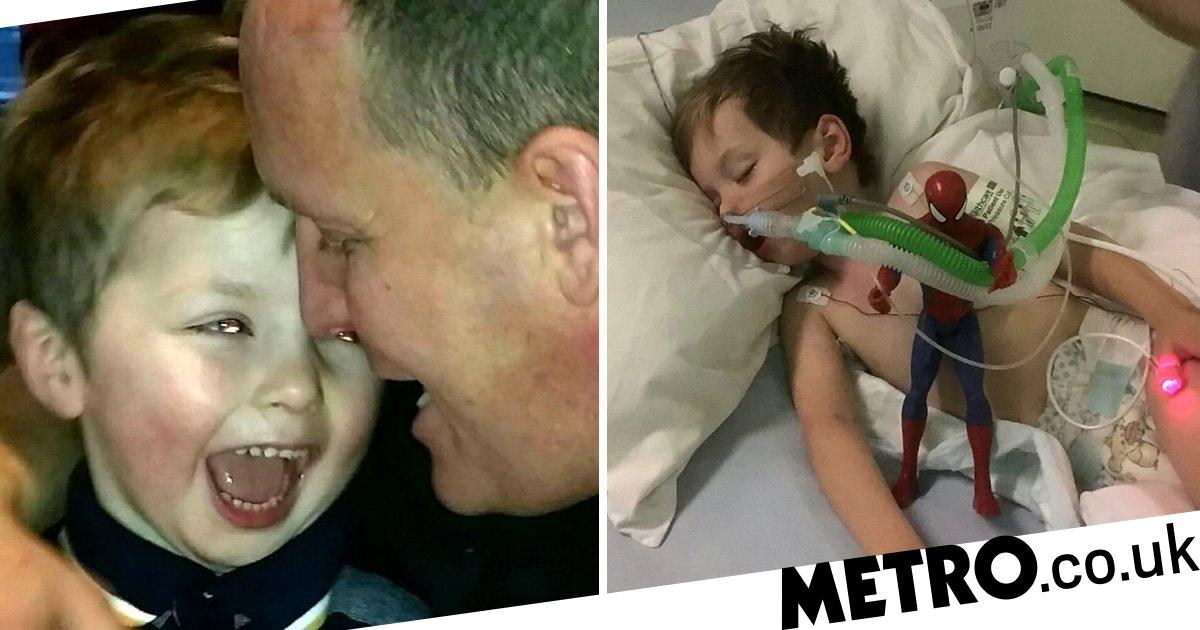 Disney bans grieving father from having Spider-Man on son's grave

Ollie Jones, 4, who died last year, was a huge fan of the superhero.

If I were the dad I’d go ahead and put Spidey on the kid’s tobmstone and let Disney sue if that’s what they want to do.

What a stupid, shitty decision for a once great company that truly cared about kids to make.

I hope a rogue headstone inscriber takes care of this little boy. How ridiculous.

Every parent who spends thousands of dollars at Disney should read this story - and re-think about visiting the parks and buying the products. This is disgusting and Walt Disney would have never been so cruel.

Disney went far leftwing starting a couple of decades ago. Walt would cry.

Every parent who spends thousands of dollars at Disney should read this story - and re-think about visiting the parks and buying the products. This is disgusting and Walt Disney would have never been so cruel.

That’s how capitalism works, you don’t spend your money with people or organizations working against positions and beliefs you value.

This is disgusting and Walt Disney would have never been so cruel.

Baseless claim that WD didn’t value his own copyright and wouldn’t have objected to it being used in certain manner.

Walt’s generosity and true love of children are strong indicators he would not approve.

Funny how the so called pro capitalists are always wanting to punish corporations so.

No one wants to punish Disney. They punish themselves. They are in the business of entertainment, their main customers are children. They deny a dead kid’s wish, they have a death wish.

The way they approach this situation was inept, and a more prudent approach should have been employed.

Every parent who spends thousands of dollars at Disney should read this story - and re-think about visiting the parks and buying the products.

Americans are not going to begrudge their children the joys of Disneyland because some kid in England doesn’t have a Spider-Man on his grave. Good gawd, why are pro capitalists always working together to punish business like this. Posters on this forum would like to kill Starbucks and Disney in one day for completely stupid shit. Also amazing how so many pro capitalists either don’t understand copyright law or don’t care about it.

Further proof that @montecresto1 is a shared bot shill account: it replied to and quoted to the same comment from @Claire three times like it has never seen it before, in a short span of 1 hour. 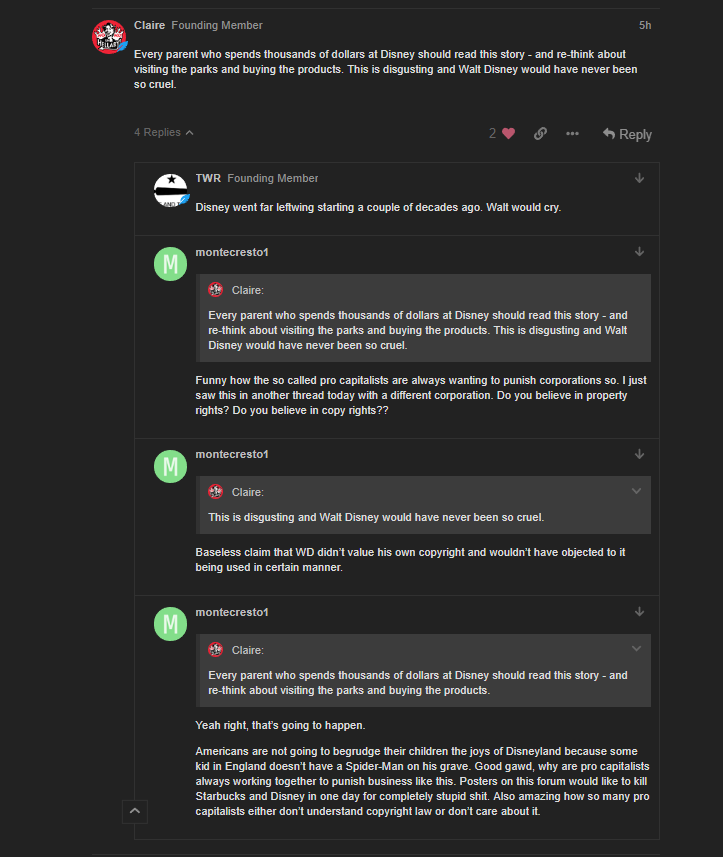 I hope a rogue headstone inscriber takes care of this little boy. How ridiculous.

The interesting thing is that Disney could have granted an exception for this kid’s stone, and it would have been a giant PR boost. Instead it played the hand it’s known for- heartless indifference to a situation involving a child’s grieving parents.

The interesting thing is that Disney could have granted an exception

No, they could not and would not set such a precedent. Keep demonizing capitalism and industry. Run them all out of business over foolish things like this.

Somewhat amazing that you feel qualified to speak for 30 million or so people you’ve never met and know nothing about.

Funny how the so called pro capitalists are always wanting to punish corporations so.

I am sure if you have kids…and if you have a son. If he dies and you wanted to put his favorite superhero, I am sure you would do the same. Regardless, of the consequences.
Although, Disney is a corporation, this is not even about “punishing corporations”. This is about your family. And that comes first above anything else.

He keeps ranting about capitalism but apparently doesn’t understand it.

We don’t owe our business to anyone, they have an opportunity to either attract it and keep it or lose it.

He keeps ranting about capitalism but apparently doesn’t understand it.