Democrats may be more racist but they are less anti-white than Republicans are. Remember Steve King just a couple of months ago, when Republicans (including himself) unanimously threw him under the bus?

There’s a lot of truth in this. The democratic leadership doesn’t give a damn about black people, they simply pander to them to keep the black vote.

If Democrats were to lose even half of the black vote they’d be hard pressed to ever win another national election.

With the growing trend of blacks abandoning the party and ever more blacks making it into the middle class which will only accelerate that trend, they are now selling out the country for the Hispanic/Latino vote because in 20 years the Hispanic/Latinos will be the largest demographic group in the US.

The only way dem’s can hold on to their votes is to treat them just like they did the blacks starting in 65, by keeping them dependent and in poverty.

Their problem is that the same Latinos/Hispanics they are flooding the country with are for the most part very hard working and very conservative in practice.

Worse for the democrats is that with their accelerated war on Christianity and in particular Catholicism they are alienating the vast majority of those same Hispanic/Latino’s they are flooding the country with.

Democrats can only succeed by sowing division, strife, and by keeping their base poor, ignorant, and dependent on gov’t for every aspect of their lives.

Central and south Americans are 90% Catholic and overall tend to be very religious and very conservative in the practice of their every day lives so this isn’t likely to end well for them unless the racists in our own country succeed in gaining power in the Republican party.

All the while trying to flood the country with cheap labor from central America and baiting them in with welfare bennies and free healthcare.

The current victims are waking up… need new ones.

Yep, and if this economy holds, it’s going to cause a major demographic shift among the two major parties that will definitely not favor the democrats.

I see a lot fewer conservatives desperately flailing around trying to prove to just how not racist they are these days. The word racist has lost its power due to overuse. Thankfully though, there’s a growing segment of white America who are growing numb to the accusation. If not hating myself for being white and not celebrating the destruction of my heritage and culture makes me a Nazi then so be it. I’m a fucking Nazi.

It’s pretty simple, if you promote the same things Nazis promote you’re a Nazi. If you don’t you aren’t.

There’s nothing wrong with being proud of your race no matter what that race is, the only problem is when that turns into hate because it leads to ethnic cleansing and genocide.

Honestly, the biggest reason people don’t care about being called racist anymore is because a lot have families like mine. It’s way too mixed race to be bothered by skin color. When we get together for thanksgiving, you would think it’s a racist revival. I joke with my step son that I got married to his mom so I could have my own personal ■■■■■ My sister in law loves to tell the joke about Grand Torino… “man, I haven’t heard that many racist names since I told my dad I was dating a ■■■■■■■ … what’s funny is she said she got called out by some idiot one day at the store for saying nigga… she said “oh shut up, my kids are black, I’m exempt from your white guilt bs”

We have fun with it as a family. My nephew and I will deliberately try to goad white libtards into saying something to us… I’ll say things like “come here boy, get the hell away from the chicken” and he’ll say “sorry sir, can I gets you some Mac n cheese sir?” It’s hilarious to watch the reactions. Maybe I’m just old and grumpy but I refuse to concede the moral high ground to guilt riddled racists that see color in everything.

Mostly I think that the majority of us are just sick of the false accusations and the fact that no matter how much we work to show them to be false they will never be dissuaded.

Dems are all about CONTROL and what better way to control than to offer free shit ? Why do you think the platform of the new dems is to “provide” regardless if one says 'I do NOT want to work " .
Dems encourage a vicious cycle of dependence, and it’s screwing with people’s lives . Dems core belief is people are weaklings who need help from working taxpayers . It’s in their best interest to keep people poor and dependent. The dem party needs a victim class to win elections and illegals fit that bill !

The snowflakes have played out their hand ad nauseam and people are just over it.

Also, the elections are just around the corner so the politicians know they need to town down on riling up the fringe and appear more center.

If Democrats were to lose even half of the black vote they’d be hard pressed to ever win another national election.

Chance are democrats would never again win another national election. Remember Clinton receive almost 3 million votes more then Trump…which came from California in 2016. This would also put more states in play…thus denying them of the senate and governorship as well.

This is why democrats are desperate to keep Black Americans in line.

The problem is the goverment…or using goverment to stifle those cultures, traditions and heritage. Our goverment must remain natural at all times. Their can’t be any exceptions.

But sadly all to many prey on those culture differences to maintain their power, their authority.

Don’t buy into their BS.

She is quite right saying so. 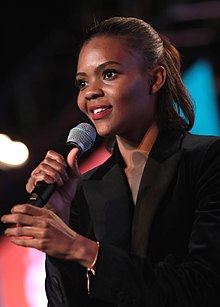 Candace Amber Owens (born April 29, 1989) is an American conservative author, commentator, and political activist. Initially critical of President Donald Trump and the Republican Party, Owens has become known for her increasingly pro-Trump activism as a black woman, in addition to her criticism of Black Lives Matter and the Democratic Party. She worked for the conservative advocacy group Turning Point USA between 2017 and 2019 as its communications director. With her siblings, Owens was raise...

Remember Steve King just a couple of months ago, when Republicans (including himself) unanimously threw him under the bus?

Steve King was a racist and a Republican, just because one is a republican doesn’t mean they cannot be a racist.

I can find conservatives who are racist as well, its just there are more racists on the left, democrats, socialists, communists, marxist side.

As more and more blacks and Hispanics move into the middle class we’ll see a contiunal drift of both to the republican side of the aisle. Democrats realize that which is why they have gone whole hogg on flooding the country with illegals. Their intent is to create a permanent dependent underclass of dependents from these people and their children.

If they can keep them in poverty long enough then dem’s have a chance of owning their votes. IF they can’t, the chance is gone.

What then wold motivate democrats to want to promote any policies which will help grow the middle class from the bottom up instead of raping the rich with confiscatory tax rates to grow it from the top down?

King earned it. There is no room for that kind of racist rhetoric in American politics.

Decent people of neither major party are going to make allowances or excuses for such blatantly offensive language or the beliefs that foster it.

Free Speech only allows you to speak without gov’t interference, it is not a shield against facing consequences for that speech.