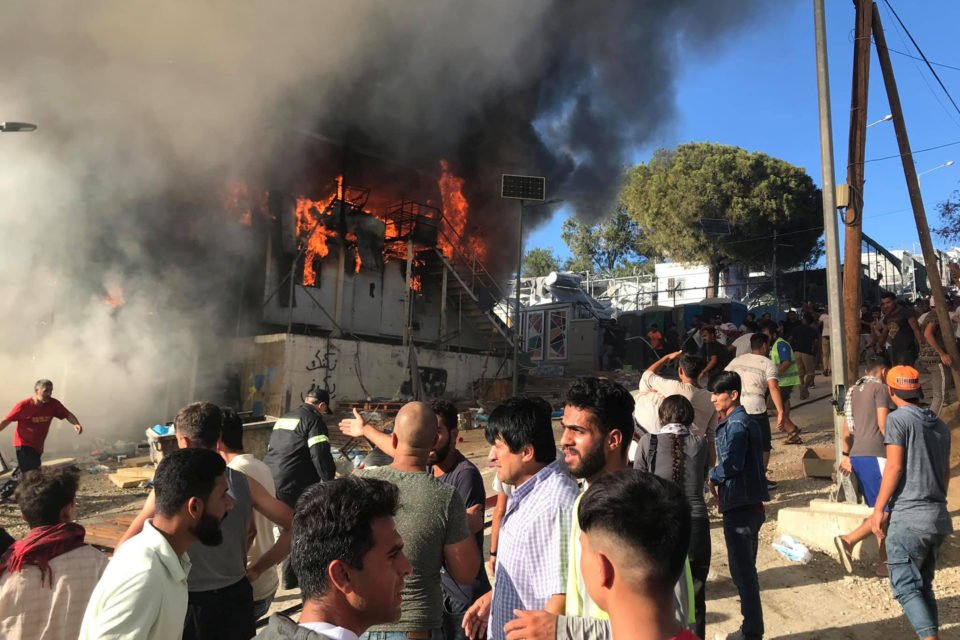 ATHENS — The situation at a notorious reception center for migrants on the Greek island of Lesbos has stabilized after a fire left a woman dead and touched off rioting, the authorities said on Monday, with local politicians and the United Nations saying the developments were further evidence that conditions had long passed breaking point.

Two fires broke out on Sunday afternoon, the Greek police said, one in an olive grove that is effectively an extension to the camp, followed by another blaze that started around 20 minutes later inside the center, which is designed to accommodate 3,000 people but is currently home to more than four times that number.

Human rights groups and others have long described the conditions at the camps as dangerous and inhumane, and the fires on Sunday ratcheted up tensions that were already high and have been exacerbated by clashes between different ethnic groups.

Kostas Moutzouris, a regional governor, told state television that the situation in the camp was a “powder keg” and called for action from central government. “Things are calm now, but the conditions are right for the situation to flare up again,” he said. “We need measures that will be implemented, not just announced.”

The upheaval has coincided with a sharp increase in the number of migrants reaching the Greek islands, with more than 22,000 reaching the Aegean islands since the beginning of July, according to the United Nations refugee agency. The arrivals are at their highest level since the European Union and Turkey signed a deal to limit migrant traffic across the Aegean in March 2016, and though it is far below the peak of the crisis, it is more than enough to overwhelm the limited facilities on islands like Lesbos.

Migrants clashed with police officers, lobbing stones and other projectiles, as firefighters sought to douse the blaze, but it was unclear whether the fires were set by inhabitants of the camp, who in the past have burned mattresses and trash to protest overcrowding and to demand their transfer to mainland Greece.

Nikolaos Ververis, a regional spokesman for the police, said on Monday morning, “The situation at the facility is now calm.” He said that the charred body of a woman was removed from the camp, near the village of Moria, on Sunday evening. The authorities would not confirm reports from aid groups that a child had also been killed.

Aid workers have repeatedly demanded an improvement in conditions, especially with the influx of migrants from neighboring Turkey on the rise. “Something has to happen, and soon,” Boris Cheshirkov, a spokesman for the United Nations refugee agency, said on Sunday.

Mr. Cheshirkov noted that the unrest came just a few days after a 5-year-old Afghan boy was accidentally run over and killed by a truck on the fringes of the sprawling camp, a reflection of the chaotic state of affairs.

“This is an urgent situation. We need to see immediate action to ease the overcrowding,” Mr. Cheshirkov said on Monday, adding that, “We need to see people moving out, and the authorities transferring more people to the mainland.” He noted that “extraordinary measures” such as the leasing of hotels could be a stopgap until new facilities were created.

Transfers are underway, with 1,400 people leaving Moria this month, but a quicker pace is needed in light of continuing arrivals, he said. According to the United Nations refugee agency, nearly 8,000 people arrived on islands in the Aegean in August and nearly 10,000 in September. Most have been families from Afghanistan and Syria, Mr. Cheshirkov said, adding that there was particular concern about the swelling ranks of unaccompanied refugee children.

Mr. Cheshirkov also called for “more solidarity” for Greece from other European Union members, pointing to a relocation program, which expired two years ago after 23,000 people were moved out of Greece and sent elsewhere in the bloc. “We need another such program,” he said.

Many of those attempting the crossing to Europe in recent years have been using Turkey as a way station en route to Greece, but the authorities have also seen an increase in Turks making the sea journey following a failed coup against President Recep Tayyip Erdogan in 2016. On Friday, seven Turkish nationals — two women and five children — drowned when a boat carrying them capsized near the Greek island of Chios, also in the eastern Aegean.

With the pressure growing on the reception centers on the Aegean islands, migration was expected to top the agenda of a cabinet meeting on Monday chaired by Prime Minister Kyriakos Mitsotakis of Greece, who last week discussed the problem with Mr. Erdogan on the sidelines of the United Nations General Assembly in New York.

Greece’s public order minister, Michalis Chrysochoidis, met with 13 regional governors on Friday to discuss the transfer of thousands of migrants to the mainland. The aim is to set up facilities, ultimately one in each region, so that the burden of hosting the migrants is shared across the country.

Notice that there is not a single woman or child in that photo.

Migrants clashed with police officers, lobbing stones and other projectiles, as firefighters sought to douse the blaze, but it was unclear whether the fires were set by inhabitants of the camp, who in the past have burned mattresses and trash to protest overcrowding and to demand their transfer to mainland Greece.

Right…so set shit on fire and attack police as a way of demanding to be released from your containment center and into the open world where there is nothing stopping you from behaving the same way towards innocent people minding their own business.

Put these animals on a boat, float it out to the middle of the ocean, sink it.

“This is an urgent situation. We need to see immediate action to ease the overcrowding,”

I have the perfect solution to migrant overcrowding. Send them back where they came from! If their safety is of concern then let their governments step up and deal with that situation. If they can’t not Europe’s problem. My hope is Europeans have had enough of the diversity and cultural enrichment. Once they abandon the “refugees welcome” concept the politicians will have to react.

Greece’s new government is passing new laws to restrict the invasion and the illegals are rushing to get in now before the new tighter laws take effect.
The illegals pay thousands of $ to Erdogan’s Turkish smugglers who like “travel agents” promised to send them to their preferred destination where they will live and breed off the host governments free like parasites instead of fighting and fixing their own countries.
When Greece puts them in camps they feel cheated. They set fires in protest and burn their own, like fools. They fight the local police / firefighters to extend the damages so as to gain media sympathy and push the bowed down European countries to knuckle under the Kallergi plan, NWO agenda.
All the heads of all the camps in Greece are controlled by NGO Open Borders foreigner Satanists beholden to George Soros.

How much tax is collected on a low wage vs. the cost of their welfare such as food an housing. Also, consider the additional burden on education, the healthcare system and the legal system.

It is not a financial win, it is a drain. So the premise that migrants are needed to prop up the welfare state is pure hogwash.

You have to wonder how these people can come up with thousands. A lot of people can’t do that as legal citizens of these countries. Where are they getting this money?

I completely agree with you. Taxi drivers and welfare queens aren’t the economic drivers of a national economy anywhere. My point was to illustrate the argument that was made by the politicians who decided to kick their borders wide open. Even if their argument had come to fruition, and all of these economic migrants were working, they still would be sending a majority of their money back to their home countries. So even under perfect conditions their argument fails.

LOL, I think we are both saying the same thing by pointing out how asinine the argument the politicians make is.

Yet, people swallow this hook, line and sinker as though it is gospel. Too bad there aren’t more out there picking apart the lack of logic so people start learning to think for themselves.

… Where are they getting this money?

From relatives in Sweden, Germany, the UK, France. The globalist banksters will facilitate the movements of money’s for a nominal fee/cut.
Same as in the US. The money transfers from America to Mexico and Central America are in the billions every year. Lucrative business for the few.

I don’t give a rat’s ass about these scammers. They need to give up the scam and go back to where they came from. I want to go on a damn cruise over to Europe and I don’t want to have to deal with getting attacked by these losers. Send them back!

Exactly - the politicians try to turn it into a good-news story. But it isn’t only the economical aspect of immigration, it’s the sheer weight of numbers, which can overwhelm the existing public social and health services, which are even now are unable to cope. And now there’s a problem where many of them refuse to allow their sprogs to be inoculated for various conditions such as measles etc. which will mean the return of hitherto eradicated diseases.

I don’t give a rat’s ass about these scammers. They need to give up the scam and go back to where they came from. I want to go on a damn cruise over to Europe and I don’t want to have to deal with getting attacked by these losers. Send them back!

Trouble is that they all seem to er, lose their ID en route, so nobody knows where to send them back to. Yes, it really is that crazy.