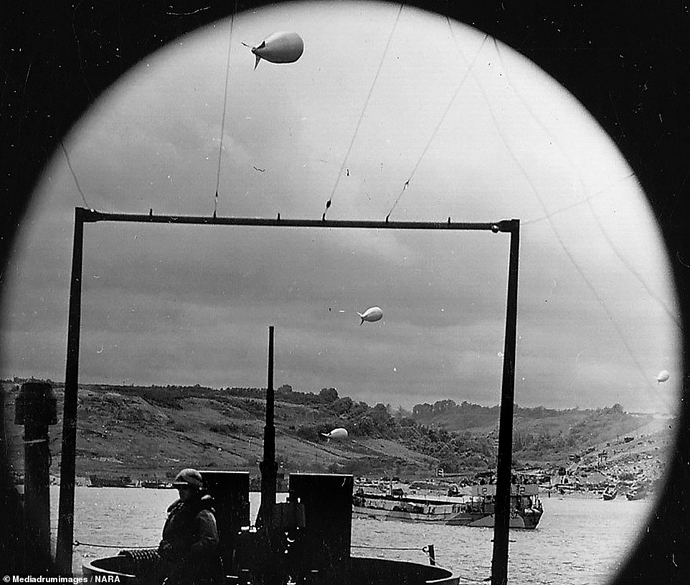 image962×817 202 KB
This is a rare soldier’s perspective through a porthole on a ship during the D-Day landings. Troops wade towards the shore under a hail of gunfire, with barrage balloons flying high in the air. These defended against aircraft attack by raising cables to cause a collision risk for approaching pilots 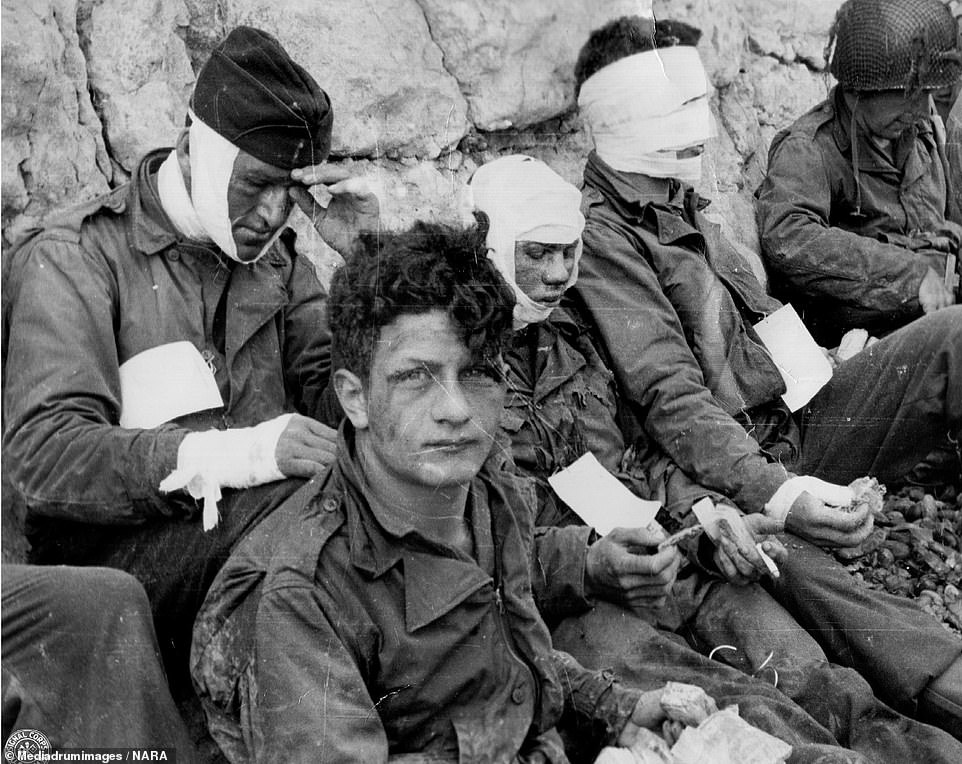 image962×764 208 KB
American troops receive medical care on June 6, getting bandaged up and taking the chance to have a smoke 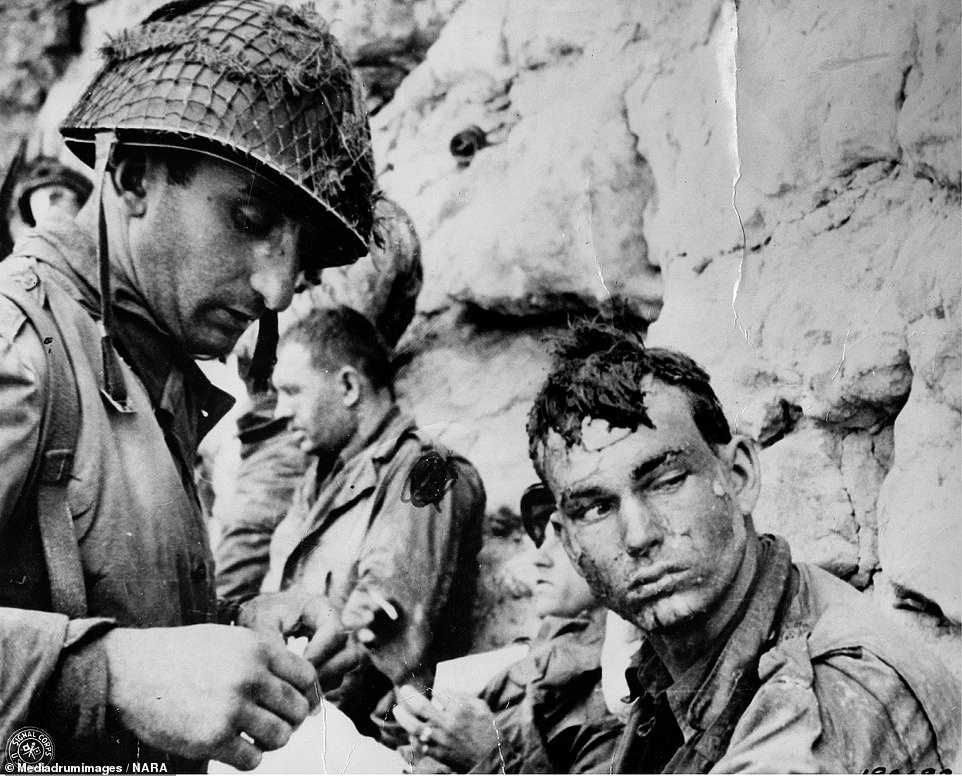 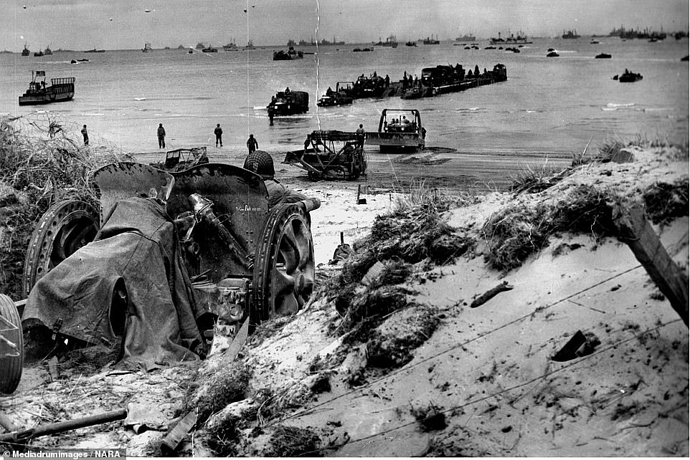 image962×642 239 KB
A German 47mm anti-tank gun blocks a narrow gap on the sand on the beach between Les Dunes and La Madeleine, in Normandy, on June 12. The machinery lies abandoned since six days after the original invasion, as the Allies cemented a solid offensive line along the region’s beaches 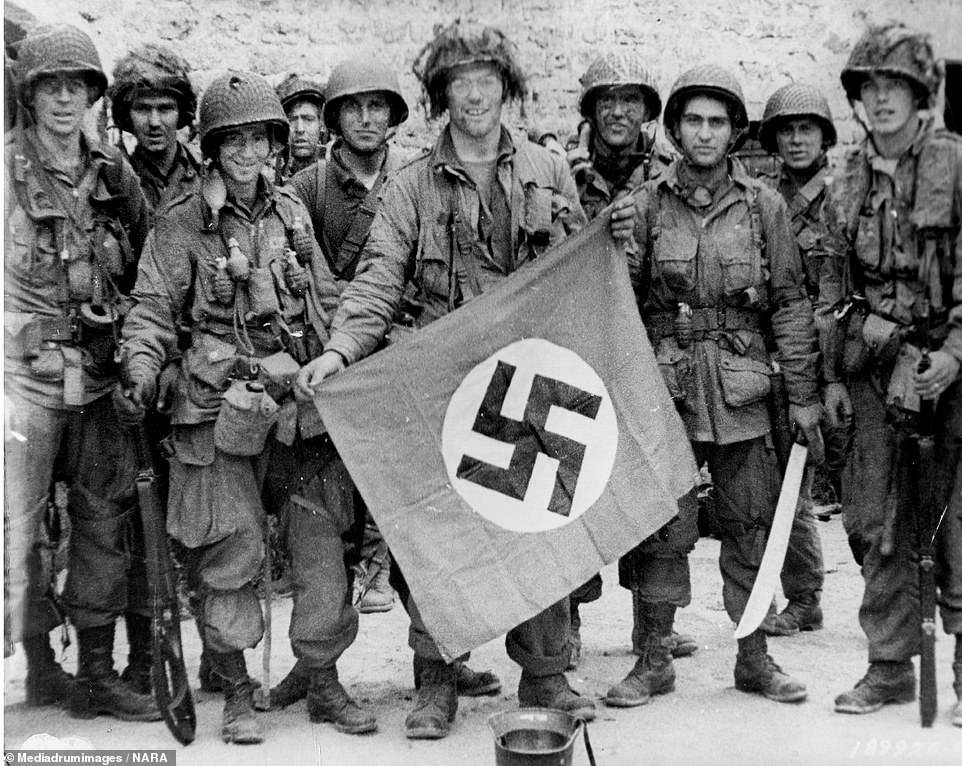 image962×766 218 KB
Members of a a US rifle squad grin as they pose with a captured Nazi flag. A German helmet with a pencilled inscription is also shown in the foreground 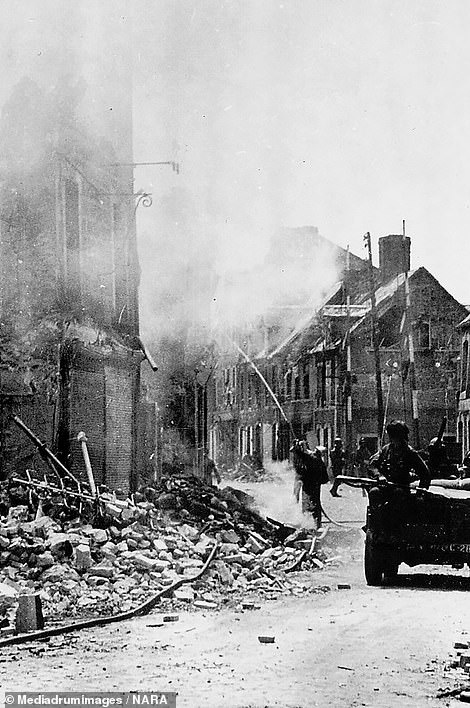 This horrific photo (left) shows the rubble and burning houses left following The Battle of Carentan, which was an engagement in World War II between airborne forces of the United States Army and the German Wehrmacht during the Battle of Normandy. The battle took place between 6 and 13 June 1944, on the approaches to and within the city of Carentan, France. This photo was taken four days after the battle in the town 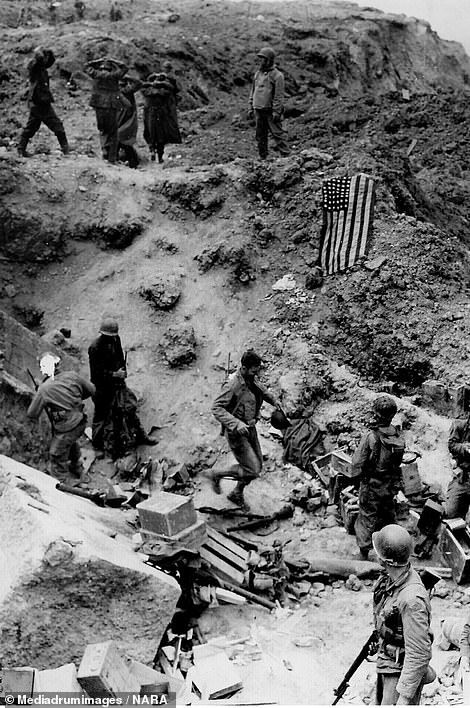 Soldiers and prisoners at Pointe du Hoc on June 12 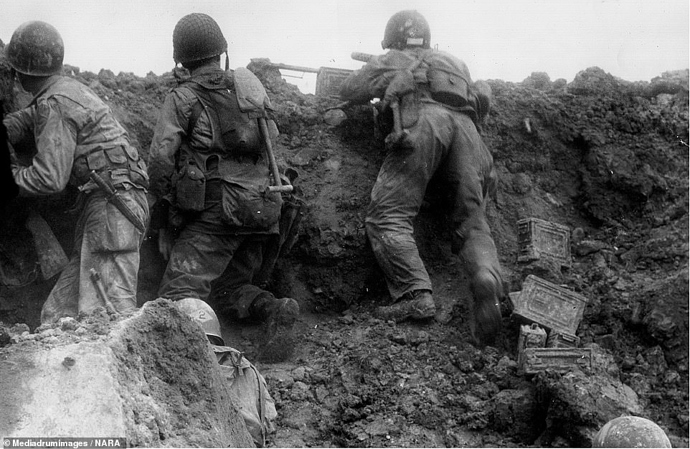 image962×627 198 KB
Soldiers from the 2nd Ranger Battalion look over the trenches, with one using a 30 calibre machine gun. The troops were at La Pointe du Hoc, in Normandy, but had arrived at the landing area on Omaha Beach, a two hour walk away. The image is one of the few to show troops in combat conditions during the historic invasion 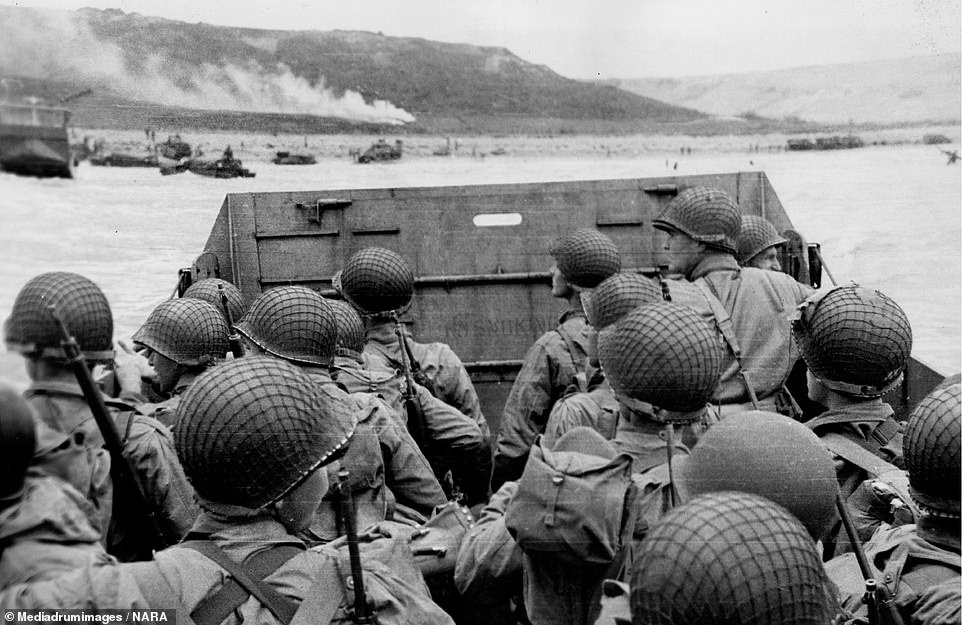 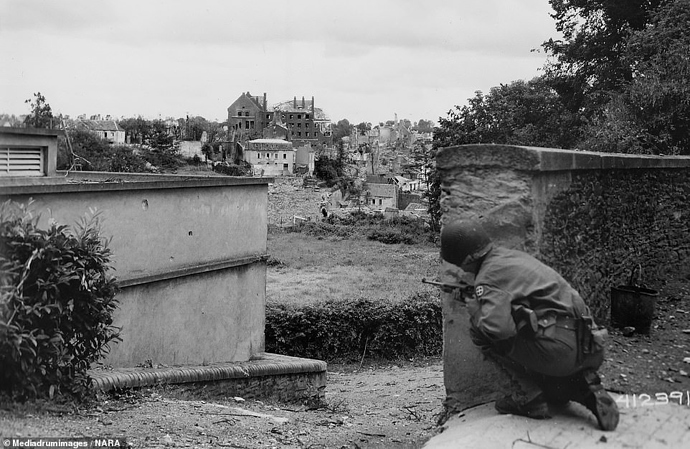 image962×627 206 KB
A soldier peers through the devastation in an unknown location. Vigilant about enemy fire, the man looks towards the rubble of town buildings behind the safety of a brick wall 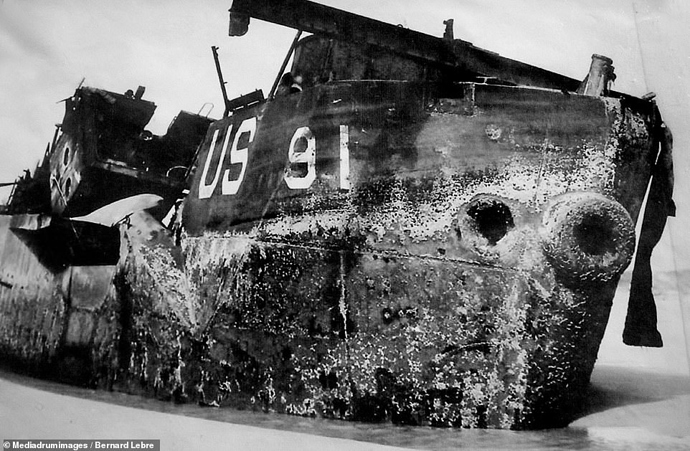 image962×629 199 KB
Having been wrecked beyond repair, a ruined LCI 91 lies abandoned. It was struck by artillery and possibly mines, and is thought to have been left to burn throughout the day. No one in the forward compartment escaped 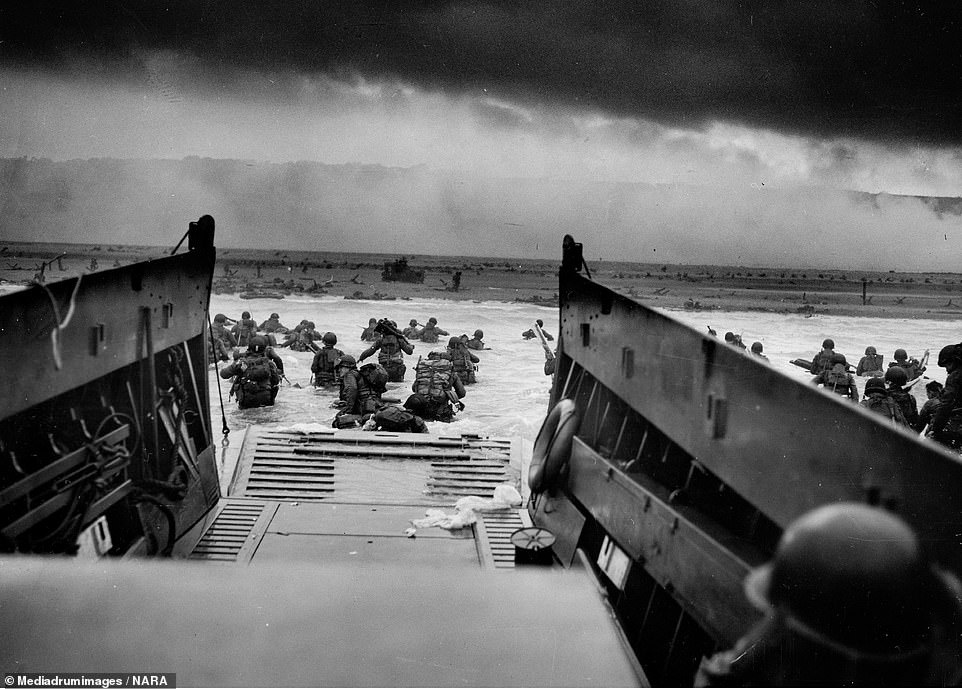 image962×689 173 KB
Taxis to Hell – and Back – Into the Jaws of Death (pictured) was taken on June 6 1944 by Robert F. Sargent, a chief photographer’s mate in the US Coast Guard. It depicts the US 1st Battalion, 16th Infantry, as they disembark at Omaha Beach. It is one of the most recognised photographs of the Normandy Landings and has been mirrored in such films as Tom Hank’s Saving Private Ryan 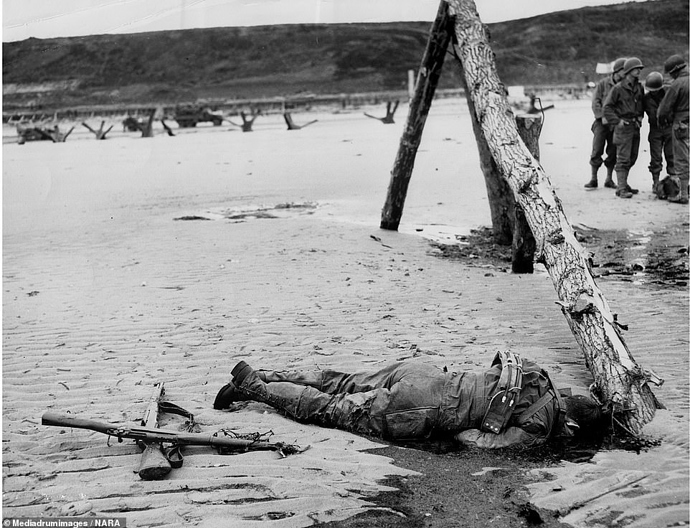 image962×737 220 KB
A D-Day casualty is shown lying next to a fallen tree. Soldiers talk in the background, as they are now use to seeing fallen comrades. It’s believed the photograph was taken on June 7, the day after troops stormed the beaches 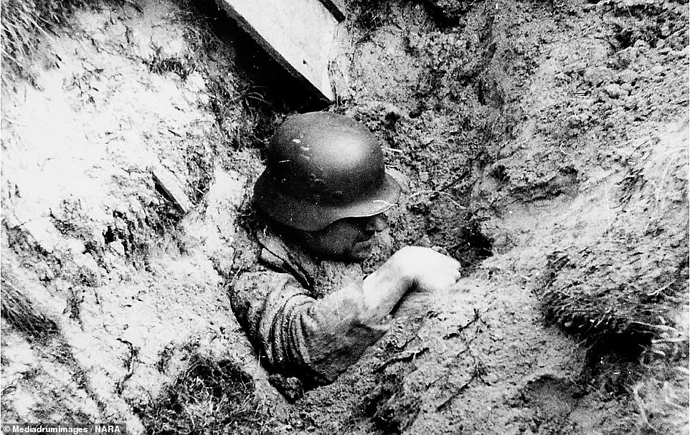 image962×607 295 KB
A German soldier is partially buried in rock and soil after a trench collapsed following an artillery bombardment on June 9. The caption on the original photograph indicates he was freed by allied soldiers but taken prisoner 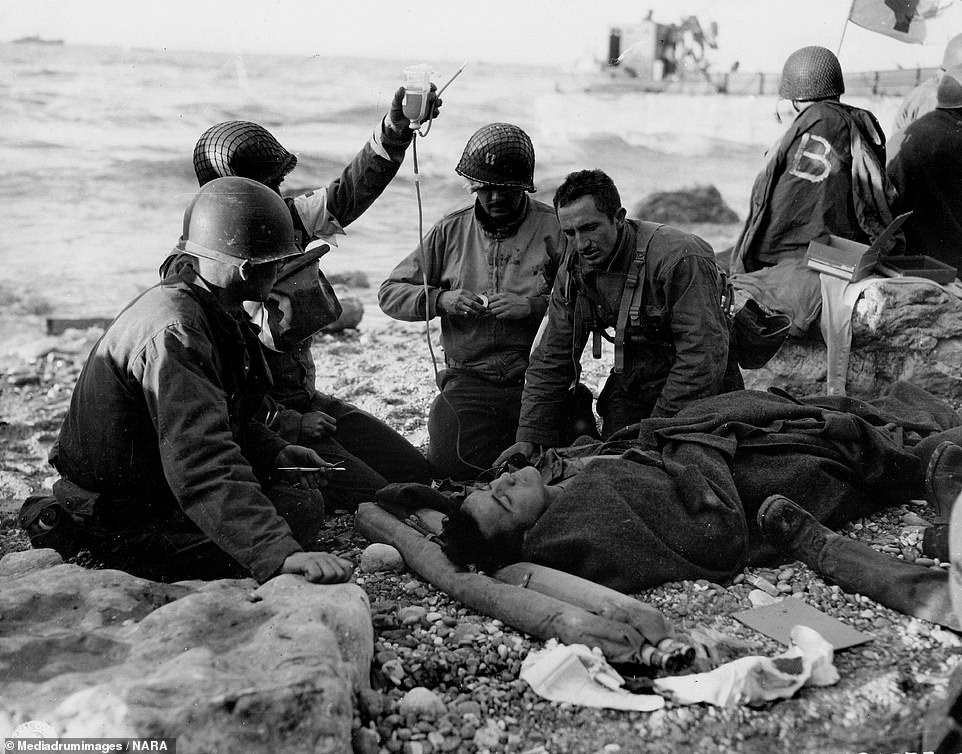 image962×754 199 KB
Worried medics try to resuscitate an injured soldier on the Normandy beaches. The US National D-Day Memorial Foundation have so far verified 2,499 Americans dead during the 1944 invasion, with the other Allied nations losing 1,914 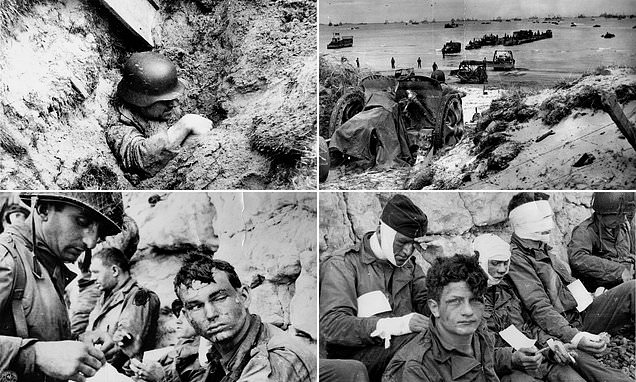 Photographs show horrors faced by Americans during the D-Day landings

WARNING - GRAPHIC CONTENT: Given the incredible scale of the invasion, almost 2,500 Americans are thought to have died, as well as nearly 2,000 troops from the other Allied Nations.

Thanks. What man looks at these without placing himself into the picture …and wondering…