The day after more than 4,100 people died from COVID-19 across the U.S., news broke that health care providers in New York were forced to throw out precious vaccine doses instead of putting them in people’s arms.

New York’s Gov. Andrew Cuomo, a Democrat, is the main man to blame. On December 28, he signed an executive order rolling out strict penalties—up to $1 million in fines, plus loss of medical license—for medical providers who allow people to skip the state-issued vaccination line, even when those doses are about to expire. The state’s current vaccination plan allows frontline public health workers who have direct contact with patients to be vaccinated, as well as residents in nursing homes and other congregate care facilities. It does not currently allow for vaccination of most other elderly people, the group at the highest risk of death from COVID-19. (Cuomo’s office did not respond to Reason 's request for comment by time of publication.)

Predictably, The New York Times reported today that some clinics throughout New York City, like the Family Health Center of Harlem, are throwing out doses that are about to expire. Vials of the Moderna vaccine yield about 10 doses, so the clinic had to open two in order to vaccinate the 12 people who showed up to their evening appointments:

The nurse at the clinic called her supervisor at home asking what to do with the remainder. From her home, the supervising nurse called her contact at the city’s health department for guidance. She was told to try to find someone who fit the eligibility criteria and was encouraged to contact a nearby nursing home, an urgent care center and a women’s shelter.

The nurse at the clinic set out on foot. She was turned away at the nursing home, a fire station and elsewhere, Dr. Calman said, before she was able to find one eligible and willing health care worker.

Dr. Calman said the nurse eventually threw out the remaining doses after the health department told the clinic that it could only vaccinate members of eligible groups."

In other words, massive fines are deterring health care workers from getting long-awaited vaccine doses to the people who need them. And they’re right to be scared of those fines, which are not empty threats: A hospital in New Rochelle is under investigation for potential violation of the state’s rules, and their vaccine doses have been seized and reallocated.

The state is wrong to put these medical workers in a horrifying ethical bind where they must choose between violating the governor’s rules to help save people’s lives, or throwing scarce resources out at a time when we’re desperately attempting to reach herd immunity and avoid higher death tolls. Especially since vaccinating more people, whoever they are, is a Pareto improvement—something that would benefit at least one person (in this case, more than that, if vaccines reduce transmission too) while harming none. And, as Reason 's Ron Bailey has written extensively, time is of the essence when it comes to vaccinations, especially as a more-transmissible COVID-19 variant spreads.

Meanwhile, states like Texas and Florida are allowing people aged 65 and older to receive vaccines, but New York refuses, saying people in the 65-74 age group will probably receive vaccines in March or April. In those states, which both have Republican governors who have received some amount of scrutiny for bucking federal vaccine-line guidance, seniors are incurring long wait times and jammed phone lines. So these states’ rollouts are not without fault, but at least the people most in need are receiving doses. (In fact, four elderly family members of mine in Texas have already received their first shots.)

Part of the problem here is that Cuomo and New York City Mayor Bill de Blasio have long been engaged in political one-upmanship and petty power struggles—a tale as old as time. But, to de Blasio’s credit, he’s started pleading with Cuomo and asking that the state open up vaccinations to seniors:

Cuomo, a man who had the astonishing gall to publish a book during the pandemic about his leadership successes, should really put the petty game of politics aside now that health care providers in his state are throwing out the vaccine doses we’ve spent the better part of a year yearning for. 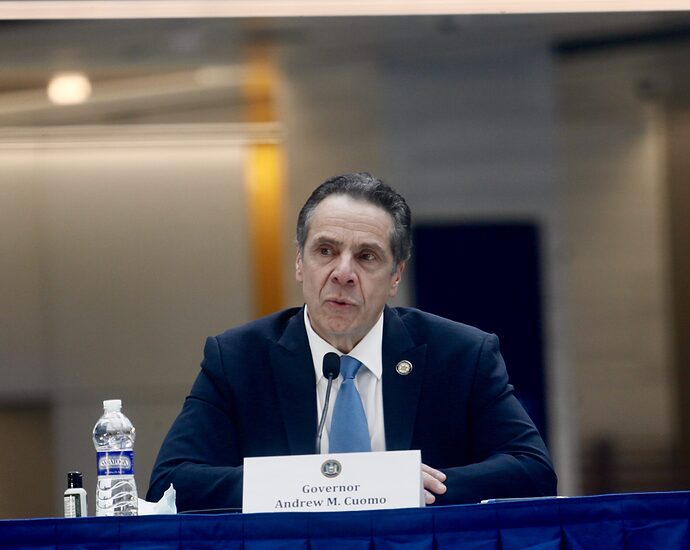 Cuomo's New York Is Just Throwing Away Vaccines Rather Than Distributing Them...

More than 4,100 people died of COVID-19 yesterday across the country, but some New York medical providers are dumping vaccines instead of putting them in people's arms.

This guy is an abomination to America. Typical Democrat nothing but failure

And h is not held accountable, an example of the double standard we face today.

Cuomo is a fucking POS!