Joe Biden has officially lost his mind. If Biden flames out, it would be funny if the DNC Establishment threw its weight behind Mayor Butt-judge. The Bernie people already hate that guy for cheating Bernie out of his win in Iowa, and you know that the other candidates are not happy either. Plus, if Trump dog whistles to the unspoken homophobia in the hispanic and black communities, he will likely break apart those voting blocs that have gone almost universally for Democrats for 70 years.

The woman had just asked the presidential hopeful about his fourth-place standing in the Iowa caucuses.

“How do you explain the performance in Iowa and why should voters believe that you can win the national election?” she asked, according to a clip of the exchange.

Biden, 77, admitted it was a legitimate question but then asked her: “Iowa’s a caucus. Have you ever been to a caucus?”

When she indicated she had, Biden responded: “No, you haven’t. You’re a lying dog-faced pony soldier,” drawing laughter from the crowd.

The phrase, from a John Wayne movie, is one Biden has used several times before, his campaign pointed out.

But it still confused the woman on the receiving end, who told The Washington Post she thought she’d asked a legitimate question.

“I read an article that he said [Iowa] was a punch to the gut, and I’m not one to just push on wounds. I’m not trying to humiliate anyone,” Madison Moore, a 21-year-old student at Mercer University in Georgia, told the outlet.

“He wasn’t sitting in at the Senate trials for impeachment, so he had Iowa to himself. And then you’ve been a politician for like decades — how are you not way above all the other candidates?”

At the campaign event, Biden told Moore that he doesn’t think the Iowa caucus is a good measure of how a candidate will perform in other states. Stick a fork in him! He is done!

I get that he was trying to be funny in a completely un-funny “no malarkey” kind of way but everything that comes out of this guy’s mouth lately is just wrong and beyond stupid. I’m kinda bummed that he didn’t beat Mayor Buttlover in Iowa because if Biden got the nomination we would get to watch the spectacle of Trump verbally eviscerating this idiot at a few debates.

Joe Biden is having a REALLY bad run. Dude can’t even afford a campaign bus that works. Corn Pop probably crawled in the engine and jiggered the wires. 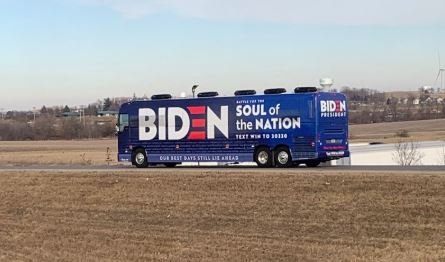 STALLED OUT: Joe Biden's Bus Breaks Down on Highway in New Hampshire

This was quite the metaphor. The Joe Biden campaign bus broke down today on a New Hampshire highway. It stalled out. After Biden made headlines today for calling a woman a “lying dog-faced pony soldier” his bus broke down on the road. The media was...

Now imagine if Trump said that. It would be the leading story on every news station with hours of discussion about how terrible he is and demanding he gives a public apology.

Joe Biden trying to impersonate John Wayne should be a crime. If the Duke were alive today he probably would have stood up in the crowd and laid Joe out with one punch.

I am loving this race. Bide is going to have to move so far left to get nominated that he’ll become unelectable. That’s if he can squeeze a win in NH and lives long enough for people to vote for him.

A large percentage of the left does not like Biden because he’s considered an out of touch Corporate Dem. With recent polling it has been shown that the Democrats are splintered, some want a more progressive candidate and others want to move more moderate but one of the few things both groups have in common is that they want a new face. Biden might be able to win the moderate vote but he definitely will not win the progressive vote and you cannot please both groups at the same time.

How sad, uncle Joe is officially around the bend. If he or any of the other kookaboos are elected, we can expect shit like this. https://youtu.be/ubFgTk7m9f4?t=3

We need to throw our support behind Joe Biden. Could you think of an easier nominee for Trump to take on than this blithering idiot?

LOL! They should all get the equal amount of delegates going into the convention. That would be f’n hysterical! Instead of one person as the nominee they would all be the nominee and they still wouldn’t win. 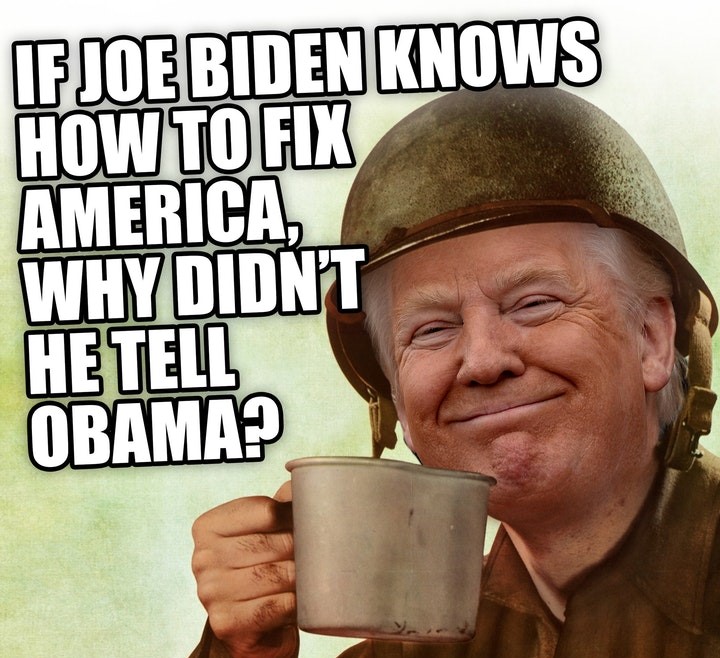 Biden is flaming out hard. He might as well just bail out now but he probably assumed that because he was associated with Obama that the Democrats would just hand him the nomination and that would be that. It’s no different than the Hillary Clinton situation in 2016. Even though she was cheating her way through the entire campaign, it was apparent that she just assumed she would win the presidency. Biden isn’t even registering on the radar with anyone and now that the impeachment is over both he and Hunter should be in cuffs.

I’m wondering why Trump can call everybody names but this triggers you, shrug…?

Gotta admit, Biden is fascinating. He came up with “lying dog-faced pony soldier” on the fly. He’s always been really weird and a little bit stupid. Add some dementia, and we have a neurological cocktail that could lead to him saying literally anything at any time. He’s doing something weird about once a week. I’m afraid he is done after today. The entertainment factor will go down.

First of all Joe has achieved eternal hero status in my book for what is one of the greatest insult quotes of all time “Lying, dog-faced pony-soldier!”

I’m pretty sure Pony-soldier means lesbian (but only Biden knows).

The rest is not as good:

Joe didn’t want to run for president, otherwise he would have done it last election, when he was younger and less senile.

The plan was for Joe to get white people to vote for Kamala Harris - but people don’t like sassy, mooncricket, pot-smoking, prostitutes. Just the way it is.

So the new plan is for Joe is to drop out and support Pete Buttplug, because the demoncracks want to be center political and not communists under Bernie. - They know they are going to lose and want to show that they heroically pushed a centrist homosexual for president.

But Joe is old and worn and he wants out. Especially since his son Hunter will be prosecuted soon unless he drops his candidacy.

What’s a politician to do?

Perfect match up for the much more boorish, churlish and clodhoppin Trump…

I have that impression as well.

because the demoncracks want to be center political and not communists under Bernie.

Quite so. They are really struggling to maintain that ground. But who do the socialists have a better chance with? Certainly, not republicans.