Get a load of what just came into my college e-mail inbox today: 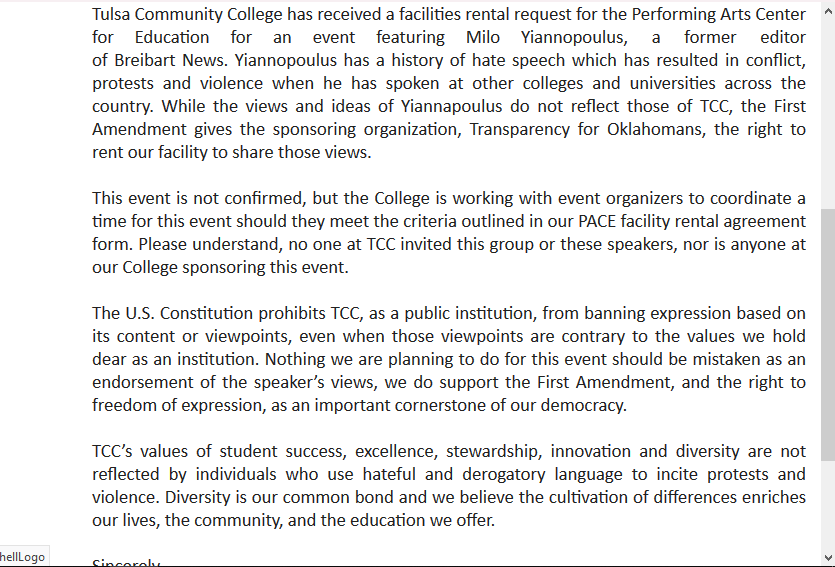 They don’t even hide it anymore. The message is just dripping with hate and hostility, from a community college that has a demographic of all ages and used to be considered centrist. They also had, a while back, a test regarding statistics and what one should do regarding sexual violence (rape/sexual assault) on college campuses. Everyone had to take it and pass with at least a 75% (it was mandatory). I’ll see if I can find it and post it here.

They mention that Yannipaulos uses “hate speech” to incite “protests and violence.” As if we aren’t all adults and know how to control ourselves if someone says something we don’t like. 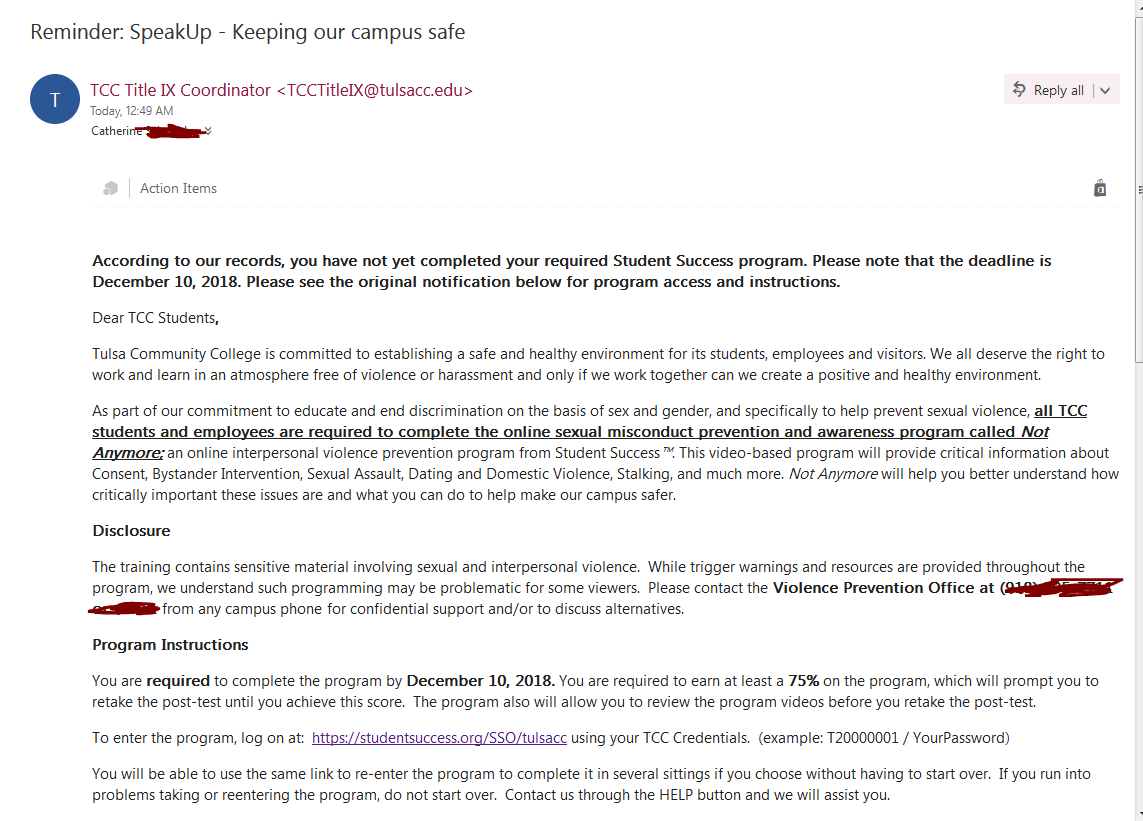 That’s a really biased message. It’s almost like they went out of their way to intentionally be biased and angry. You should find a way to get that email to Milo and his team.

I just might. I’m thinking of replying to the message with a vague message, “stop the hate” (they won’t know which ideology’s hate I’m referring to), or, “#WalkAway.” This would be an Saturday Night Live skit if they weren’t so biased themselves, and if this weren’t actually the way some people actually think about politics.

We support freedom of speech…BUT

Their statement about the Constitution was ridiculous. They are acting like they are being unfairly forced to allow an opposing viewpoint to be spoken because of muh Constitution.

But they support “free speech” ok

It’s not even confirmed yet and they send this shit out?

Of course! They are leftists. They are stirring the pot so that they get people protesting before any opposition arrives.

Probably to stop Milo from arriving. A tactic that is known all to well on college campuses.

Yup. They’re angry before he’s even showed up. Because of hive think.

It’s almost like this action is designed to suppress Milo’s ability to speak freely.

College is now a leftist induction cult. They teach you on how to be offended and outraged by everything and by that teach you how to fail at life. Best part is you get loads of debt for these wonderful lessons.

Progressives have automated the college experience.

What would have happened if you didn’t comply with that requirement?

I’m not sure. It’s possible I could be unenrolled from the college.

You can discuss anything you like with leftists, as long as it doesn’t involve reality or truth.

I’m ashamed to admit I graduated from this once great institution.

One evening last September, a Michigan State University student awoke from his nap to see his roommate sitting at his computer. There was a video playing, and the student realized his roommate was watching a video of conservative commentator Ben Shapiro.

The newly awoken student then took to his own computer to file a complaint with the administration’s bias reporting system against his roommate for watching the Shapiro video.

“Ben Shapiro is known for his inflammatory speech that criticizes and attacks the African American community,” the student wrote in his report against his roommate. “I thought hate had no place on MSU’s campus yet MSU has roomed me with someone who supports hate speach [sic].”

Shapiro is a popular conservative pundit whose appearances on college campuses are frequently accompaniedwithprotestsby liberal students.

In response to the complaint, the university tasked an investigator to look into the matter, who was told to work for a “room change if the claimant would like one.”

And there is some humor on some college campus’s:
The arts are appreciated at UCCS. The overall attitude to increase the art presence on campus resulted in the development of the Visual and Performing Arts facilities. This is why it came as a surprise when the administration made a snap decision late last week to tear down the Ent Center for the Arts building.

Cranes and bulldozers were then seen converging on the building.

Four students were injured in the explosion and five more were injured by falling debris, but they were all freshmen so no one really cared.

They have a sense of humor on campus unlike other colleges.

They mention that Yannipaulos uses “hate speech” to incite “protests and violence.”

So libs know they only need to resort to protest and violence and it will be the speaker who is blamed.