Who closes this early in New Hampshire? She’s done and won’t make it through November. She is going to bail next. Tulsi is pulling ahead of her in the polls.

The Harris campaign closed all three of her field offices in the state and laid off more than 10 workers, CBS News reported.

“A handful of staffers will run a scaled-down campaign out of the Manchester headquarters,” a campaign spokesperson told CBS News in a statement.

Harris no longer plans to head to the Granite State to file for the primary in person, and instead will mail in her declaration of candidacy, according to the report.

“Senator Harris and this team set out with one goal – to win the nomination and defeat Donald Trump in 2020,” Harris’ communication director told CBS.

“To do so, the campaign has made a strategic decision to realign resources and go all-in on Iowa,” the spokesperson added.

The news comes the same day former Texas Congressman Beto O’Rouke announced he will drop out of the 2020 Democratic presidential contest.

“Though it is difficult to accept, it is clear to me now that this campaign does not have the means to move forward successfully. My service to the country will not be as a candidate or as the nominee,” O’Rourke said in a statement released on Twitter. 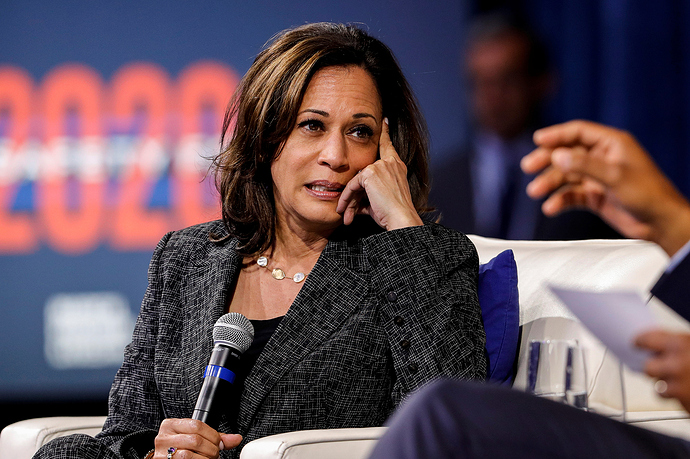 She is trying to save money!

She’s done and won’t make it through November.

Kameltoe Harris has a HUGE Glass Jaw. One tough question and she melts like butter in a skillet. Tulsi absolutely destroyed her at the first debate and her campaign went into a nose dive right after that. Good, I can’t wait for this hooker to stop smoking blunts and sippin on 40s of ol’E before heading to the debate stage. Her last stoned sleepy performance was pathetic. She’s a low budget race-baiter who is out of her element and has zero solutions. That’s what happens when you bed your way to the top.

She is trying to save money!

For what? “Headbobbin’” Harris is going to the place she knows best…straight down.

Who closes this early in New Hampshire?

Harris is a loser with little to no appeal in New Hampshire; polls show she’s going nowhere now even in her own state of California. She’s toast.

There should be a sarcasm font!

If her own state is failing to support her what are her chances of retaining her seat?

She’s done and won’t make it through November.

One of the key themes of her political campaign is calling for Donald Trump to be banned from Twitter.

Gee Kamala, with big plans like that, who knows why you aren’t polling well???

Kamala is an absolute dumpster fire whore monster. What a complete embarrassment for women. Sleeping her way to the bottom.

Kamala needs to shut the fuck up, drop out of the race, and go back to sucking cock for DA positions in CA. She tried to keep people she knew were innocent in prison, sent parents to jail due to their kids skipping school, and laughed about smoking weed while locking up who knows how many people for possession of marijuana. She laughs on the campaign trail about her plans to violate the basic human rights of American citizens, and she wants corporate overlords deciding who can and can’t speak on the internet. What a despicable human being.