And I already know whom they’ll be voting for in 2020, tho its so ridicuous that I think it might have been a joke. Or not.

This outrageous crowdsourcing request is leaving a bad taste in the mouth of Twitter readers.

Most people ask for meal donations out of need — but a Philadelphia man has taken to the Meal Train “giving” website asking for elaborate cuisine and “mental-health check-ins” — because he can’t seem to handle the impending birth of his first child.

“As the father-to-be, I’m teetering on a fence of emotions,” the man, Jim Burns, writes on Meal Train — adding that his wife, Alex, is due to give birth April 29. “One of the things I’m most afraid of is not getting a great deal of sleep and as a result not being in the best frame of mind to offer my wife the support she needs to recover from the child-birthing process.”

The expecting parents, who live in the Fishtown neighborhood, aren’t just asking for canned food. In the special instructions menu, Burns posted a lengthy list of favorite dishes — separated by breakfast, lunch and dinner — along with links to their recipes.

Breakfast, for instance, can be Paleo breakfast egg muffins with thinly sliced cremini mushrooms, pork breakfast sausage, and 3 tablespoons of melted and cooled ghee. Burns also posted no fewer than 11 dinner ideas, including a ■■■■■■ lamb meatball and Swiss chard stew.

But don’t expect a thank you: Burns requests that people text him to ask what they need, but notes that it shouldn’t always require a visit inside his house.

“If we could use some food but prefer no distractions, I’ll put a big white cooler in our side yard,” he writes.

However, if the couple does welcome in their new cooks, then they may ask for the dishes to be washed, the dog to be walked or for the courtesy of small talk to get their minds off “the new routine” with their newborn.

Burns’ campaign made its way to Nextdoor, the private social network for neighborhoods, which caught the eye of a neighbor, 34-year-old Jack Jokinen, who posted screenshots from the campaign in a Twitter thread that’s since gone viral.

But Jokinen, a sports writer for the Yankees-focused website Bronx Pinstripes, soon decided it was far more.

“I think it’s way too much and completely out of touch,” he says. “Maybe there’s some bigger issue that we don’t know about, like a health issue, but in those situations you put that [information] in … it seems like the husband is unprepared and his primary concern is his sleep. There are a lot of ways to make meals very quickly.”

The social media response to Jokinen’s Twitter thread was fiery.

“They’re having a baby, not both dying of cancer,” tweeted an outraged Andrea Bachman. “Reality is hopefully going to slap these two in the face one day.”

When reached by The Post, the dad to be was shocked to find out he was blowing up online.

“I apologize if it was taken the wrong way — and I’m frankly just very surprised and a little disheartened by … the response,” Burns says. “If they are not interested, then they don’t have to check that site or do anything. This is the world we live in.”

His public plea was primarily aimed at “friends and family,” Burns says, but one neighbor, through Nextdoor, “has reached out and has kindly said they’d offer their support, so that was awfully nice”

Meanwhile, Jokinen jokes that the Burns’ Meal Train campaign could set a precedent.

“When my wife gets pregnant I may start one of these but we only eat food from suites at Yankee Stadium,” he says. “Leave the tickets in the mailbox.” 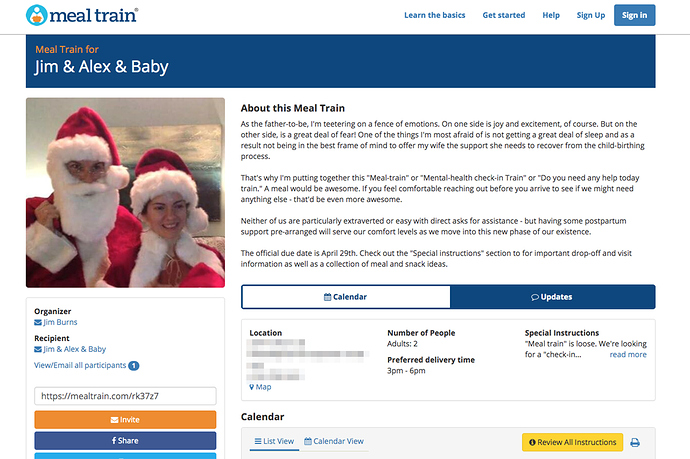 This outrageous crowdsourcing request is leaving a bad taste in the mouth of Twitter readers. Most people ask for meal donations out of need — but a Philadelphia man has taken to the Meal Train …

He sounds mentally disturbed. I’d be concerned for any child under his “care”.

My grandmother was next to the youngest of 18. I asked her why people had so many children back then. she said : NO TV.

Damn! My GGF married twide, had 7 kids from his first wife and 9 from his second but 18 from one marriage would make, making babies and caring for them a full time job!

As for the subject of the OP the guy must be out of his freaking mind if he thinks his request isn’t completely insane.

The grandmother also had 11 children. She said, sometimes hard to keep track of; and maybe some were actually neighbors kids that got into in the mix. Anyway, she raised them all.