Father Jim Sichko, commissioned by Pope Francis as a full-time “papal missionary for mercy,” on the holiness of ALL types of families:

A pregnant “man” getting a late-stage pregnancy check-up: 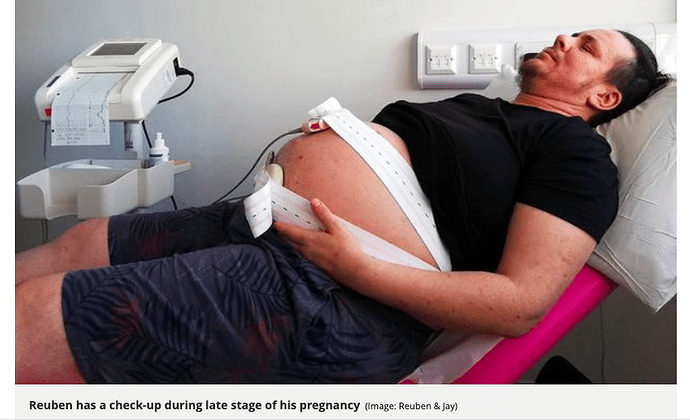 These advocates from the church for the homosexual and trans communities are not of God or servants of God.

God rejects and condemns these abominations that mock Him and our Savior.

Super AIDS is coming and the wrath of God will not be stifled any longer. He is extremely upset with us and the devastation He will bring will make the biblical wrath seem like a slap on the wrist.

Are we completely sure that that’s not just a pic of an ‘average’ American who has overdone it at Christmas dinner?

Super AIDS is coming and the wrath of God will not be stifled any longer. He is extremely upset with us and the devastation He will bring will make the biblical wrath seem like a slap on the wrist.

If you are interested in the debate concerning the death of conservatism, you should really read: America’s Decline by Revilo P. Oliver. Here are some excerpts:

Strictly speaking, therefore, ‘conservatism’ has come, paradoxically, to mean reaction, an effort to purge the nation’s social and political organization of deleterious accretions and revolutionary changes imposed upon it in recent times, and to restore it to the pristine state in which it existed at some vaguely or precisely defined time in the past. The persons who now call themselves Conservatives, if they mean what they propose, are really reactionaries, but eschew the more candid word as prejudicial in propaganda.

In Britain, for example, persons who by conviction call themselves conservative (as distinct from politicians who think the word useful to stimulate the glands of their victims) have no wish to conserve and preserve the existing situation, which has resulted from the invasion of their country by hordes of aliens who are, by a biological necessity, their racial enemies. On the contrary, they desire a reaction, a return to the time when the British Isles were the property of the creators of their civilization, the Aryan inhabitants, whether Celtic or Teutonic in origin. And I doubt whether there is any contemporary institution — not even the present degradation of the Monarchy — that a British “conservative” would wish to preserve as it now is and without restoring it to its condition in some more or less specific period of the past.

In the United States, a comparable mutation of the word’s political meaning has taken place during the decades through which I have lived. I began as an American conservative: I wished to preserve the American society in which I grew up, not because I was unaware of its many and gross deficiencies, but because I saw it threatened by cunningly instigated agitation for changes that would inevitably destroy it and might ultimately result in a reversion to total barbarism. And with the euphoria of youth, I imagined that the existing structure, if preserved from subversion, would, under the impact of foreseeable and historically inevitable events, accommodate itself to the realities of the physical and biophysical world and perhaps give to the nation an era of Roman greatness.

Over the years, as the fatal subversion proceeded gradually, relentlessly, and often stealthily, and was thoughtlessly accepted by a feckless or befuddled populace, I became increasingly aware that ‘conservatism’ was a misnomer, but I did entertain a hope that the current of thought and feeling represented by the word might succeed in restoring at least the essentials of the society whose passing I regretted. And when I at last decided to involve myself in political effort and agitation, I began a painful and very expensive education in political realities.

Since I have held positions of some importance in several of what seemed the most promising “conservative” movements in the United States, for which I was in one way or another a spokesman, and I was at the same time an attentive observer of the many comparable organizations and of the effective opposition to all such efforts, friends have convinced me that a succinct and candid account of my political education may make some contribution to the historical record of American “conservatism,” should someone in an unpredictable future be interested in studying its rise and fall.

Memoirs and recollections are always subject to the subtly perverting influence of hindsight. Prometheus always abdicates to Epimetheus, try as we may to exclude the intruder. The opinions that I held and the positions that I took at any given point in my education are recorded in the articles that I contributed to the periodicals of the groups and organizations in which 1 supposed myself to have a leading part and to which my principal contribution was precisely writing and speaking on their behalf. Scripta manent. Writing preserves thoughts and sentiments that quickly fade from the consciousness that entertained them and are inevitably dispersed in the amalgam of a newer present. Therefore, to verify and validate the political and cultural positions that I took during the decades of my education, I have documented my account with a selection of what seem to me the most important, but yet typical,articles that I published, and have added at the end of this volume a complete bibliography for anyone who may wish to look further. Whether, as some of my friends tell me, these articles, although mere journalism, written for the passing day, have some permanent,perhaps literary, value, is not for me to judge and is not relevant here. The present volume is to be a contribution, perhaps minor and necessarily personal, to the history of the “conservative” movement in the United States.

When I called these articles typical, I meant only that they fairly represented my position at the time they were written. I do not pretend, and would not suggest, that they were typical of the oddly amorphous reaction in the United States that was called “conservatism” or “patriotism” by sympathizers and called “extremism” or “Fascism” by our racial enemies and their lackeys.

I think I may claim without immodesty that I always saw reality more clearly than anyone in the motley procession of self-appointed “leaders” who, inspired by illusory hopes and imagined certainties, arose to “save the nation”, fretted out their little hour on the darkling stage of an almost empty theatre, and vanished, sometimes pathetically, into the obscurity from which they came. What I dare not affirm is that I ever saw reality as clearly as some of the shrewd men who cynically exploited - and exploit - the residue of patriotic sentiment and the confused instinct of self-preservation that remains in the white Americans who still respond to one or another variety of “right-wing” propaganda.

If you consider objectively the career of a highly successful confidence man who is profitably vending patriotic nostrums to worried Americans, you cannot prove that the man did not, with lucid sagacity and cold realism, take into account all the multiple factors of the present situation and by a penetrating analysis perceive that our nation and race is hopelessly and inalterably doomed by its own fatuity and a subconscious, but irresistible, death-wish and only then did he decide to extract as much profit and exhilarating amusement as he could from a doomed species, which, be it remembered, had involved him and his progeny in its insane suicide; he may even have told himself that by swindling the patriotic suckers with delusive projects to absorb their money and energies, he was being as merciful as a physician who promises recovery as he injects morphine into the veins of a dying man to ease his pain. With one or two of the great hokum-hucksters of the “right-wing,” the possibility that I have suggested cannot be excluded; and if that is the explanation, one may, of course, raise questions about their morality, but none about their intelligence. And if the future shall have proved them right, the present volume may still have some slight value as an example of naiveté.

If what I tried to do is more than an example of a kind of sophisticated credulity, readers of the present and students of the putative future may find some interest in the “education”, in Henry Adam’s use of that word, I received as my most pessimistic fears were again and again proved to have been wildly optimistic. And if this book is to have such interest, I shall have to explain how I came to involve myself in activities that effectively diverted a large part of my time and energy from a form of scholarship in which, if it be not vanity to confess it, I had flattered myself that I could attain the eminence and influence of an A. E. Housman or a Wilamowitz-Moellendorff.

Before I do so, however, I must interject an explicit warning, for this book may come into the hands of readers for whom it is not intended. I do not propose to entertain with anecdotes or to soothe by retelling any of the fairy tales of which Americans seem never to tire. If these pages are worth reading at all, they deal with a problem that is strictly intellectual and historical, and they are therefore addressed only to the comparatively few individuals who are willing and able to consider such questions’ objectively and dispassionately, thinking exclusively in terms of demonstrable facts and reason, and without reference to the personal wishes and emotional fixations that are commonly called ‘faith’ or ‘ideals’. It is not my purpose to unsettle the placidity of the many who shrink from unpleasant realities and spare themselves the discomfort of cogitation by assuring themselves that some Savior, most commonly Jesus or Marx, has promised that the earth, if not the whole universe, will soon be rearranged to suit their tastes. As Kipling said of the fanaticists of his day, they must cling to their faith, whatever the cost to the irrationality: “If they desire a thing, they declare it is true. If they desire it not, though that were death itself, they cry aloud, ‘It has never been’”.

Persons who are not capable of objectivity or are unwilling to disturb their cerebral repose by facing displeasing facts should never read pages that cannot but perturb them emotionally. If they do so, they must blame the curiosity that impelled them to read words that were not intended for them. The reader has been warned.