Some hope for Colorado? 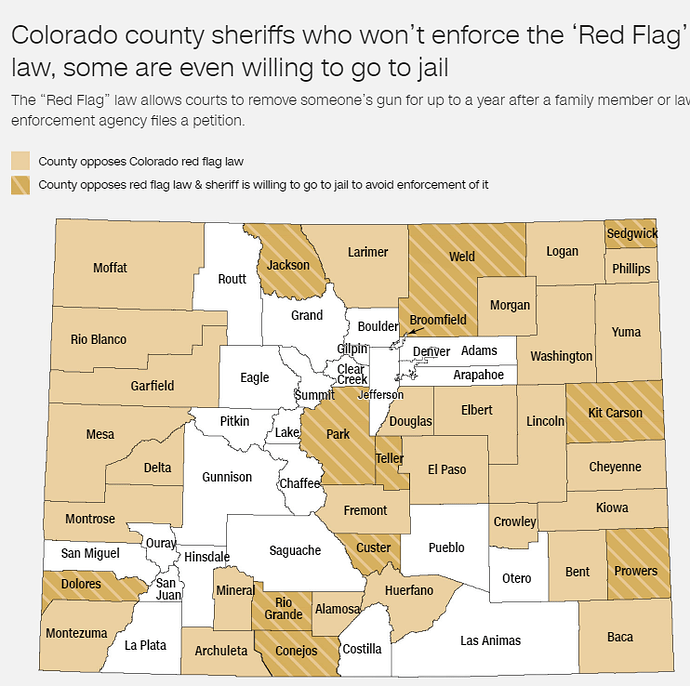 (CNN)Colorado’s controversial “red flag” bill was signed into law by Democratic Gov. Jared Polis on Friday, with more than half of the state’s counties declaring opposition to it and many sheriffs promising not to enforce it at all.

“This is a moment of progress,” said Colorado House Majority Leader Alec Garnett, one of the legislation’s four sponsors. “Today, we did something that was difficult and that is going to save lives.”

Known as the “Extreme Risk Protection Order,” the law will allow a family member, a roommate or law enforcement to petition a judge to temporarily seize a person’s firearms if they are deemed a risk to themselves or others. Fourteen other states have passed similar legislation.

Still, the law now faces major hurdles, with a pro-gun lobby group promising to challenge it in court. Additionally, a growing number of sheriffs in the state have vowed to ignore the law when it takes effect next year, calling it unconstitutional.

Weld County Sheriff Steve Reams told CNN last month that he would rather be found in contempt of court and locked up in his own county jail than carry out a court order to seize a person’s weapon.

At least 10 other sheriffs contacted by CNN are lining up behind Reams, saying they are prepared to go to jail rather than enforce a law they believe would violate a person’s constitutional rights.

“How many judges are going to send all the sheriffs in Colorado who are standing up to this to jail?” wondered Teller County Sheriff Jason Mikesell, who is among the sheriffs willing to choose jail over enforcement.

Garnett said he wasn’t concerned about sheriffs being locked up.

“What I’m going to lose sleep over is, if that’s the choice that they make, and someone loses their life, someone in crisis goes on a shooting spree, (or) someone commits suicide” because a gun wasn’t taken away, he said.

Already, 38 of Colorado’s 64 counties have officially declared their opposition to the bill, and 35 of them have passed formal resolutions against the law. Many of the resolutions declare the jurisdictions to be Second Amendment “sanctuary” or “preservation” counties, and pledge not to allocate resources to enforcement of the law.

Legal challenges could be on the way

“Rocky Mountain Gun Owners is going to file a lawsuit against the red flag legislation before the end of the session,” the lobby group’s executive director, Dudley Brown, said. The legislative session ends May 3. Brown also said there could be a second lawsuit filed after the bill becomes law, but declined to provide more details.

Brown is also planning recall efforts of “at least 10” state lawmakers who supported the legislation. Two Colorado lawmakers were successfully recalled in 2013 after supporting controversial background check legislation and a restriction on magazine size.

The El Paso County Sheriff’s office initially said the county would file a lawsuit when the legislation became law. The county now says it is still “in the brainstorming phase” of a potential lawsuit, according to county spokesman Matt Steiner.

According to the Giffords Law Center, which lobbies for tougher gun laws, there have not been any successful legal challenges of any similar state laws. There is, however, an ongoing complaint in an Illinois district court asking for an injunction, arguing that the law violates the Second and 14th amendments.

Assuming Colorado’s law withstands a court challenge, defiant local sheriffs are on a legal collision course with the state. State law enforcement agencies like the Colorado State Patrol do “not have the authority to supersede local control,” and seize the guns instead, according to Shelby Wieman, a spokeswoman for Gov. Polis.

Polis is confident that law enforcement will not ignore court orders to seize weapons, but if they do, it would be for the district courts or the state attorney general to resolve. 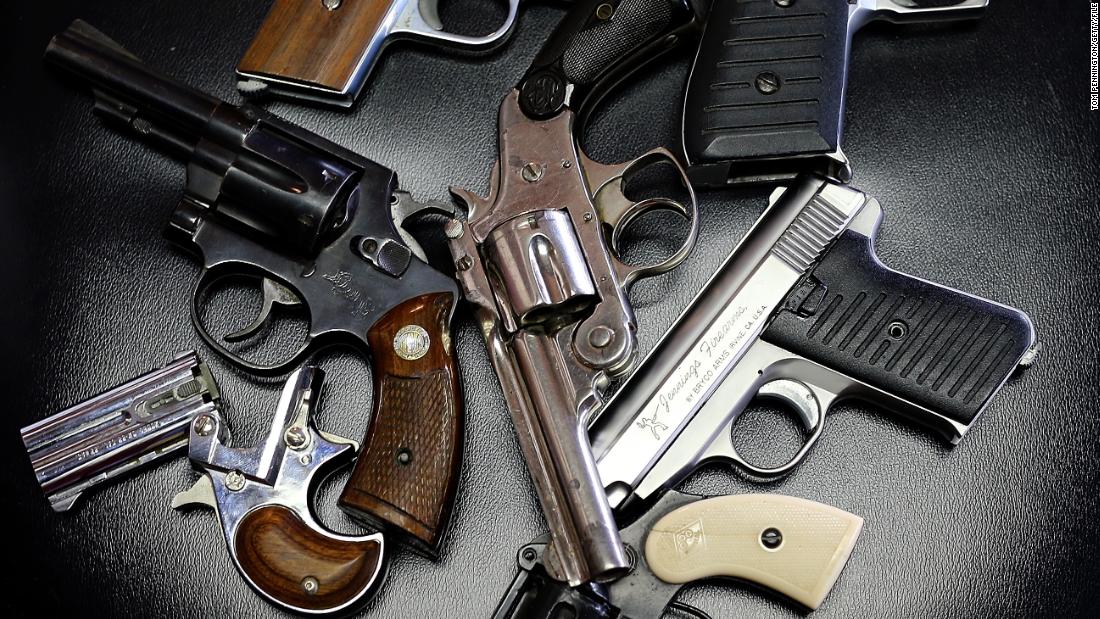 Colorado's controversial "red flag" bill was signed into law by Democratic Gov. Jared Polis on Friday, with more than half of the state's counties declaring opposition to it and many sheriffs promising not to enforce it at all.

As they say, if the Left treats us badly while we’re armed just imagine their behavior if they ever disarm us?

Our sheriff supports the aw, the county commissioners hav dealt with to by not providing funds for the sheriff for the program. A recall effort has begun for the Sheriff as well a Polis.

Imagine if they tried.

“Legalize” dope and ban guns.
Looks like it may become a trend.
Wanna smoke weed? Sure… just hand in your firearms and we’ll allow that.
That will be the future when they march you into the “smart city” gulags.

Missouri is leading the way in regards to preserving one’s 2nd A rights while America transitions into acceptance of cannabis. Others will follow our model.

Wasn’t it Obama that rid the Army of officers who said that they wouldn’t order their troops to shoot Americans?

2009 Nobel Peace Prize nominee Jim Garrow shockingly claims he was told by a top military veteran that the Obama administration’s “litmus test” for new military leaders is whether or not they will obey an order to fire on U.S. citizens.

Garrow was nominated three years ago for the prestigious Nobel Peace Prize and is the founder of The Pink Pagoda Girls, an organization dedicated to rescuing baby girls from “gendercide” in China. Garrow has been personally involved in “helping rescue more than 36,000 Chinese baby girls from death.” He is a public figure, not an anonymous voice on the Internet, which makes his claim all the more disturbing.

“I have just been informed by a former senior military leader that Obama is using a new “litmus test” in determining who will stay and who must go in his military leaders. Get ready to explode folks. “The new litmus test of leadership in the military is if they will fire on US citizens or not”. Those who will not are being removed,” Garrow wrote on his Facebook page, later following up the post by adding the man who told him is, “one of America’s foremost military heroes,” whose goal in divulging the information was to “sound the alarm.”

Garrow’s claim is even more explosive given that the country is in the throes of a national debate about gun control, with gun rights advocates keen to insist that the founders put the second amendment in the Constitution primarily as a defense against government tyranny.

It also follows reports on Sunday that General James Mattis, head of the United States Central Command, “is being told to vacate his office several months earlier than planned.”

Concerns over US troops being given orders to fire on American citizens in the event of mass gun confiscation first arose in 1995 when hundreds of Marines at 29 Palms, California were given a survey as part of an academic project by Navy Lieutenant Commander Ernest Guy Cunningham which asked the Marines if they would, “Fire upon U.S. citizens who refuse or resist confiscation of firearms banned by the United States government.”

The survey was subsequently leaked because many of the Marines who took it were shocked by the tone of the question.

The US Military has clearly outlined innumerable civil emergency scenarios under which troops would be authorized to fire on U.S. citizens.

In July 2012, the process by which this could take place was made clear in a leaked US Army Military Police training manual for “Civil Disturbance Operations” (PDF) dating from 2006. Similar plans were also outlined in an updated manual released in 2010 entitled FM 3-39.40 Internment and Resettlement Operations.

Had Hillary won there would have possibly already been more Wacos and Ruby Ridges. With another administration subservient to the Muslim Brotherhood as the Obama administration was we would likely have seen more terrorists acts too as what emboldens Islam is any whiff of success, or as the Kipling poem points out: if you pay the Danegeld the Danes NEVER go away.

I will also opine that a number of accidents or heart attacks etc that were especially advantageous to Clinton and the Democrats would have already happened, not just Scalia who might have even been a trial run.

The DNC is a party under the control of evil people, people who are the enemies of America, of our laws and civilization, of humanity and even reason itself. Their rally around abortion and madness in the form of fluid gender identity are proofs.