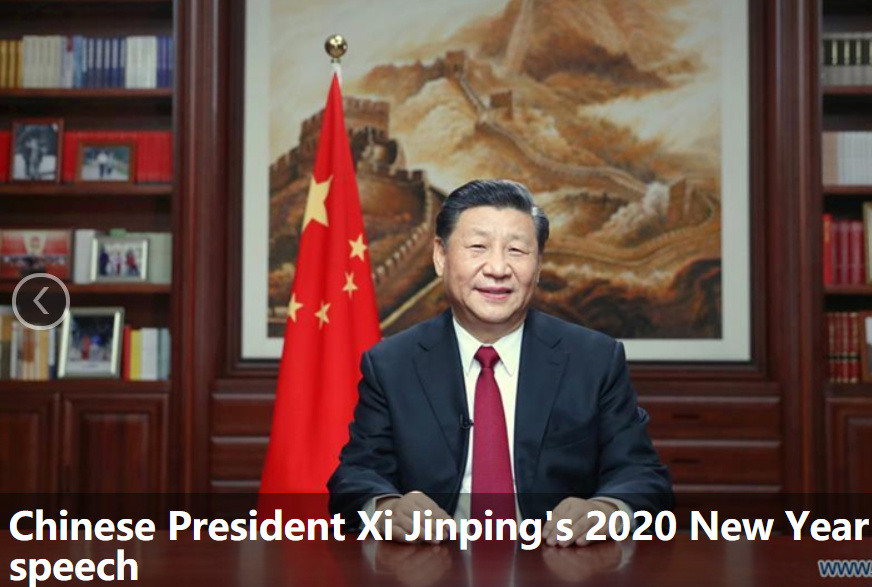 The year 2020 is arriving. From China’s capital Beijing, I would like to extend my New Year wishes to you all!

In 2019, we sweated and we toiled as we pressed ahead with concrete efforts for achievements. Thanks to our steady pursuit of high-quality development, China’s GDP is expected to edge close to 100 trillion yuan with the per capita figure reaching the level of 10,000 U.S. dollars.

Significant breakthroughs have been achieved in three tough battles.

About 340 impoverished counties and more than 10 million people have been lifted out of poverty. Our lunar probe Chang’e-4, for the first time in human history, landed on the far side of the moon; the Long March-5 Y3 rocket was successfully launched; the Xuelong 2 icebreaker set sail on its maiden voyage to the Antarctic; the construction of the global network of the BeiDou Navigation Satellite System is sprinting towards the finish line; the commercial application of 5G technology is accelerating; the Beijing Daxing International Airport “phoenix spread its wings”… all these achievements are the result of the efforts and sweat of those who strive in the new era, and they demonstrate extraordinary Chinese splendor and Chinese strength.

Over the past year, reform and opening-up has continuously generated vigor for development. The reform of Party and government institutions has been successfully completed. We have set up another batch of pilot free trade zones, and expanded the Shanghai Pilot Free Trade Zone.

The Science and Technology Innovation Board was launched smoothly. We have cut taxes and fees by more than 2 trillion yuan, and raised the individual income tax threshold.

Many types of commonly-used medicines have seen their prices drop, while cheaper and faster internet connection has enabled faster flow of information. Garbage sorting is leading the new trend of a low-carbon lifestyle.

This year we have also streamlined the work of officials at the grassroots level. New changes are taking place everywhere and the country is taking on a fresh look.

Over the past year, we have steadily pushed forward reforms in our national defense and military systems. The armed forces have taken on a new look of a strong army in the new era. We held a grand military parade on National Day, celebrated the 70th anniversary of the establishment of the Navy and the Air Force, and also hosted the 7th Military World Games. The country’s first self-developed aircraft carrier was commissioned. The people’s army will always serve as a great wall of steel that guards our motherland. Let’s salute those loyal soldiers who safeguard our home.

The most memorable moment of 2019 was the celebrations for the 70th anniversary of the founding of the People’s Republic of China. We cheered for the glorious achievements the People’s Republic has made over the past 70 years, and were overwhelmed by the sheer force of patriotism. The formations during the military parade were powerful, and the mass pageant thrilling. Tiananmen Square was turned into a sea of happiness.

All of China was arrayed in red with proud smiles on all faces as the song “My Motherland and I” played throughout the streets and alleys. Patriotic feelings brought tears to our eyes, and patriotic spirit forms the backbone of the Chinese nation. All these merge into a surging current that sings an ode to New China and inspires us to work harder in the new era, filling us with boundless energy.

Over the past year, I have visited many places. Construction of Xiong’an New Area is progressing, Tianjin Port is booming, Beijing’s sub-center is thriving, grasslands in Inner Mongolia are splendid, the Hexi Corridor, after thousands of years, is teeming with new life. The winding Yellow River, where the sky is high and waters are wide, sometimes turbulent, sometimes calm; on both banks of the Huangpu River, there is plenty and prosperity, and ribbons of light shine in the night.

Everything is flourishing across our motherland. I traced the routes of China’s revolution to strengthen my original aspiration. From Yudu in Jiangxi Province where the Red Army gathered for their Long March, to the Revolution Museum in Xinxian County in Henan Province, the former capital of the Hubei-Henan-Anhui revolutionary base, from the Monument to the West Route Army in Gaotai, Gansu Province, to the revolutionary memorial site in the Fragrant Hills in Beijing, all these places aroused many feelings and thoughts in my mind. Our original aspiration and mission are our inexhaustible source of motivation during our Long March of the new era.

As usual, no matter how busy I was, I spent time visiting people in the countryside. People shared many of their innermost thoughts with me, and I always keep them in mind. I have also received letters from villagers of the Dulong ethnic group in Gongshan, Yunnan Province; residents of Xiadang township, Shouning County in Fujian Province; soldiers of the Wang Jie Squad; the graduate students of the Class of Champions at Beijing Sport University; and children and senior volunteers from Macao. In my reply letters, I applauded the achievements they had made and sent my best wishes.

Over the past year, many people and their stories touched us deeply. Zhang Fuqing has kept a low profile and stayed true to his original heart despite the great contributions he’s made to the nation; Huang Wenxiu dedicated her youth and life to poverty alleviation; 31 fire fighters sacrificed their lives in the line of duty in Muli, Sichuan Province; Du Fuguo sacrificed himself to protect his teammates; and China’s Women’s National Volleyball Team won the World Cup in an eleven-match winning streak. Numerous unsung heroes, with neither complaint nor regret, with dedication. Ordinary people living extraordinary lives.

The Chinese propaganda machine never sleeps, and this smoke and mirrors of feel good stories should be a real moral booster while hiding the true economic numbers that would otherwise send the country in a panic. Xi is the perfect man for the job while the global trade reset is in process, they will continue with panda face!

I wonder how much real and unfiltered news the Chinese people actually get. If you read the text of that speech things seem pretty great. However, just as you suggest things aren’t so great.

What areas of achievement pointed out by the Chinese president do you disagree with THOT?

I wonder how much real and unfiltered news the American people actually get from the New York Times.

(China isn’t much better than the US, I might add)

No one but die hard leftists and rootless cosmopolitans read the New York Times.

Ahem, I know who you mean.

wonder how much real and unfiltered news the American people actually get from the New York Times.

Which of course has nothing to do with the thread topic! As usual you can’t post something related to the OP!