Trade deficit with China eliminated by 2024. If this pans out, it could be a major game changer.

They plow billions into American goods, percentage of that money gets plowed right back into China and trade deficit continues expanding.

China knows that. So the question is why 6 years?

If you say Trump will be out of office then you’re correct. Meanwhile possible tens if not hundreds of billions that China plowed into our economy buying up American goods those corporations are depended even more on China…and will push back any future politicians that wants to challenge them.

China understand corporate greed, in fact they are using it to undermine our economy and challenging our military.

What’s interesting about China is that it’s always the long game. They probably look at us and think that 6 years is a joke. They plan on a generational scale. We should have realized that. They might even offer to take a beating over 6 years. Just wait until year 7. This will get ugly.

In my (potentially dumbass) opinion, we should not have normal trading relations with a competitor that might one day be an opponent.

The Chinese take the dollars from their unfair trade surplus and spend it trying to undermine the West’s influence. We are helping the Commies to get rich, and providing them with the cash to promote values at odds with ours.

Free trade should be fair, of course, but I think it should also be limited to strategic partners that promote our values.

Precisely. We have election cycles, our administrations come and go.

In 6 years new administration that is bought and paid for by corporations that does business in China will be lot more favorable towards em.

If fact look for money going to democrats in 2020…follow the money and where it’s originating. My guess business that are invested heavily in China will be donating to democrats.

China understand corporate greed, in fact they are using it to undermine our economy and challenging our military.

Yes you are correct in your analysis. China plays the long game, so any concessions they make is solely intended to wait out this administration’s term. Think about it this way, China says they will buy American produced rice as another concession. Really? This is a joke, because America doesn’t produce a lot of rice, and China doesn’t get the majority of their rice from their Imports, and when they do supplement it with what is not grown domestically the rest comes from Thailand and other neighboring countries at a much cheaper cost.

What is a game changer in all of this is the recently renegotiated trade deal USMC formally known as NAFTA in which China has skirted paying US tariffs for over 30+ years by way of Canada and Mexico.

The problem with China is not so much China itself, but the COC Tom Donahue and the pandering lobbyists who seek to corrupt our elected officials in DC such as McConnell, Feinstein and many others who have sold out the American workers and have decimated the middle class and small independent businesses.

No deal is possible with China, due to the fact that what the US is asking in its demands that it requires that China to make wholesale changes to its domestic policies in order to be compliant and agree to a mechanism of enforcing the rules that they play by something that the communist party will not be wiling to do.

Any deal with China should be met with a severe degree of skepticism and extreme prejudice, due to the fact by nature Chinese are liars and they play a zero sum game, and Lighthizer and Navarro know this salient fact! 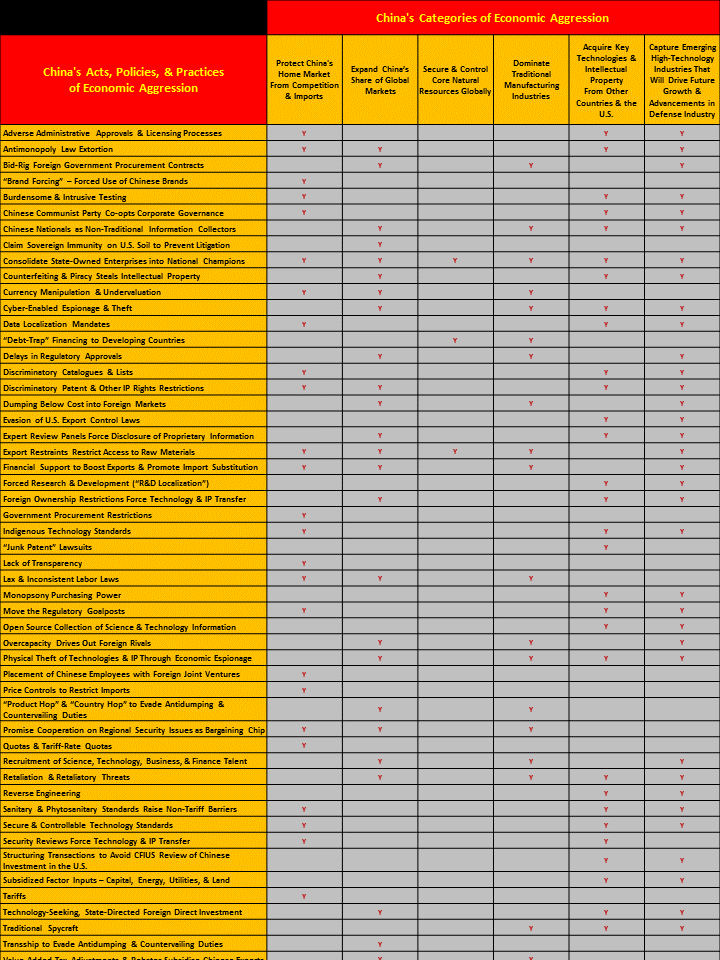 This is the Navarro Matrix and China hasn’t denied this as being true. China’s ultimate goal is pure economic World domination.

Any announcements that China and the US are making progress in their trade negotiations is only window dressing for it serves to shake the markets in one direction or the other. Media manipulates at the behest of the corporate masters!

Lastly, the only way the US is going to win the long game with China is to have a successor to Trump who will continue the MAGA agenda as in America first. Secondly addressing special interest lobbying to eliminate dirty money and bribe grease within our political system means eliminating the buying power of Chinese nationals of our elected officials. Third more tariffs should be implemented and less dependency on Chinese made goods and more advocacy on American made goods will secure America’s economic prosperity. Forth. The more Americans are less dependent on Chinese made goods and the more they buy American made ones means more demand for US based manufacturing. Steel and Aluminum industries is indeed in America’s best National security interests.

Focusing on a America first approach is the only way this matter is going to put a “W” in the win column and secure America’s economic future and put China back to addressing their own economic problems and it starts with addressing the traitors in our own back yard, like the Ryan’s, the McConnell’s, The Clinton’s, the Bushes, the Pelosi’s, The Fienstein’s, The Flake’s The Corker’s etc.,etc, etc.! When looking at this problem in the aggregate, there is literally trillions of dollars at stake for many who sought to undermine our political institutions and is a major reason why Media, and many representatives within both the business and political communities seek to eliminate Trump, and China plays a major role in the bribery they payout!

Completely agree! China is after all still a communist country and thus will continue to play by their own set of rules no matter how many platitudes the Globalist’s want to advocate!

Great post - China has infiltrated American big tech to the point where big tech actively promotes the Communist Chinese agenda to censor opinions that go against those of the state. Google has even refused to work with the Pentagon while they continue to work with the Chinese government - now follow the money Google gives to candidates.

…and if in 6 years we get a President with balls, our tariffs on Chinese crap imports can be increased again. However, another liberal pussy like Obama will acquiesce, bow and kiss the asses of all world leaders that seek to take advantage of our weak leaders.

That is a good point and there is something to be said about American companies committing economic treason and should be held to account for their wretched display of duplicity that works against American Security interests. Google, Apple, Facebook and others I am sure is reason to suspect why they are so willing to submit to the Globalists views. Its all about control and inventing the instruments that puts forth and fosters the need for control to lord over the masses (the commoner). China’s surveillance tech, their social Credit system is something they will be wanting to export to all countries in the world at the behest of the elitists club. Orwell warned us of this and China is the tip of the spear in leading us into this new brave new world of serfdom!