China Just Went Nuclear In The Trade War, And There Is No Turning Back Now

Why would we want to turn back? Why are we economically linked with communists? Cucks like Ben Shapiro will tell you it’s because we want 200 dollar television sets, not because globalists want all the money they can make as fast as they can make it…with no regard for the well being of their own citizens.

When will Americans start to wake up and realize what is happening?

At the end of last week, President Trump announced that the U.S. would be imposing a 10 percent tariff on 300 billion dollars worth of Chinese imports, and that marked a dramatic escalation in our trade war with China. This move by Trump came as a total shock to Chinese officials, and global financial markets were thrown into a state of turmoil. Since that announcement, we have been waiting for the other shoe to drop, because we knew that the Chinese would retaliate. But honestly, very few of the experts expected something like this. On Monday, China announced that it is going to completely stop buying U.S. agricultural products…

China Just Went Nuclear In The Trade War, And There Is No Turning Back Now

There is really nothing I can think of that China produces ( other than Chinese ), that we cannot do without. Anyone who doesn’t believe the USA can do a toot sweet turn around, if cornered, has forgotten about WW2. Monday, Singer Sewing Machines; Friday, Singer Machine Guns.

I know exactly what China is hoping for, to help elect a weak Democrat that is in their pocket into the White House in 2020.

The Singer Machine Gun was a figure of speach; but what I meant, if cornered, the USA is capable of phenomenal resilience. However, Singer did make the Holy Grail of 1911s. They go for a staggering amount of money.

We never should have been trading with China to begin with. They are not our friends and never have been.

If China stops buying USA agricultural products, they’ll have to buy from other suppliers.

With China just devaluing tier currency it’s going to alienate Europeans. They my enjoy cheaper goods but will make all European product that much more expensive in China.

BTW, there is a factor in Chinese consumption of agri products that is totally independent of all the trade war stuff.

China is transitioning meat consumption. Less pork. More chicken. First of all they had a swine flu outbreak among swine herds that resulted in the loss of about 25% of its pigs. And no end in sight.

China is moving to more chicken consumption as a result.

Chickens cost less per pound of meat to produce than pigs.

Pig feed is heavy on soybeans. Chicken feed is more corn and wheat. China’s reduction in soybean consumption is heavily influenced by this – not by the trade war. (China is not buying as much soybean overall, not just changing its supplier to other countries.)

It will take soybean growers time to transition to the change in demand. Farms that are tooled solely for growing soybeans don’t easily change to something else. (That’s not the case for farms that produce multiple types of crops, of course. They’re already tooled for other things and can just stop putting in soybeans for a while.)

I have no problem with showing China who is boss on trade. They want to be the world’s number one super power at the end of their 100 year plan. Can you imagine a world where they are the ones throwing their weight around without competition? Better start accruing those social media points now…or put a stop to their bullying.

Not really seeing the wisdom in stopping food imports when you have a few billion people to feed. That’s the brain of the commie though, instead of sacrificing some profits by severely attacking “US” companies on their shores, they’d rather punish their own people by stopping to purchase US produced food.

The West probably should have started weaning off China at least 20 years ago. Since Nixon in the 70s, the West thought they could turn China into a Democratic, capitalistic friend of the West. We gave them favored status and turned a blind eye when their trading practices where against international rules, firstly to encourage their integration into world trade, then because some very powerful people were making a shit load of money, and then because pulling the tit away could send the world economy into a depression. Like all things political the politicians didn’t have the wisdom or the guts to what was necessary at the right time.

This is great, and yes there will be some pain, but America getting to the point of being self sufficient again and getting people to understand that they will need to pull themselves up by the bootstraps and get to work means no more free lunches! This is the wake up call that Americans need and in the long term will be better off! Instead of crying about it, we just need to look at it as an opportunity to start producing American made again, root out the communist spies from stealing our tech, influencing our elections and subverting our freedoms! All good in my book! All short term pain for Long term gain!

Because of low wages,little if any environment laws etc U.S. corps looked like the Oklahoma land rush going into COMMUNIST CHINA to set up factories. Then SQUAWK when the COMMIES want to control them.
Noone was listening when Trump talked about their currency manipulation .They let the Yuan fall to about 7 to the dollar.
COMMUNIST CHINA owns Smithfield Foods ,a leading pork producer which gives them a good pork source along with manipulating pork prices.
The U.S. doesn’t have a President or a CEO that has the BALLS to OFFICIALLY recognize Taiwan as a country, establish an Embassy and set up factories abd FUCK COMMUNIST CHINA!!! Which we be one of the first things I would do.

As the saying goes the pen is mightier than the sword! China has other problems as well as Hong Kong is getting restless for their independence and doesn’t look like they will be backing down either! I see great opportunity in the commercial real estate market looming as Chinese will be liquidating their assets for pennies on the dollar! Good times!

Trump just tweeted this out!

"China needs to buy dollars to backstop their own currency (¥uan). When China trades with the U.S. they hold the return dollars as a peg against their weak currency. Remove the flow of dollars (lessen exports) and they start to run out of strong pegged currency.

What is happening today is not as much direct devaluation by China; rather they are intentionally allowing their currency to drop in value, in an effort to lower export prices and off-set any tariffs from the U.S. Simultaneously, Beijing is spending internally, burning cash, to keep their economy from weakening. Their Yuan burn rate is greater than the influx of higher valued dollars needed to hold their position.

They cannot keep this position indefinitely.

First, here’s a solid interview with former CEO Gerald Storch on how the currency devaluation leads to lower prices for U.S. consumers. Again, emphasizing the point that U.S. consumers are not paying for the tariffs against China." Watch: Interview with Peter Navarro! “China is ripping us off and Trump won’t stand for it!” They came close to getting someone they wholly owned in '16.

In fact, though I don’t think I’ve mentioned it around here, I still think the Norks acting up the way they did was Kim trying to still see what he could get after some deal between Clinton and the ChiComs was prevented.

The way I saw it at the time, Clinton was likely to have got something she wanted … a pile of cash and a great feat of diplomacy in NK to cement her reputation, the Norks would have likely go normalized relations and the ChiComs? Maybe the South China Sea, concessions from Taiwan under pressure from Clinton, missile and other tech … who knows?

This type of trade war can lead to hot war… 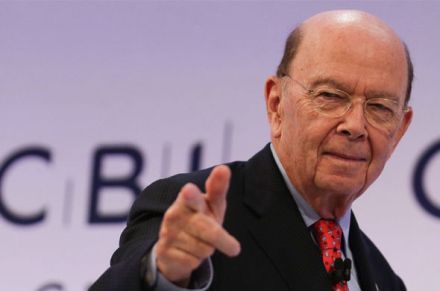