In watching the Barr hearing on C-Span3, I noted a blacked out picture hanging on the wall to AG Barr’s left.

Do any of you have information concerning the nature of this picture?

It appears to have been redacted.

Could it be offensive to some people?

Why is it being hidden from our view? 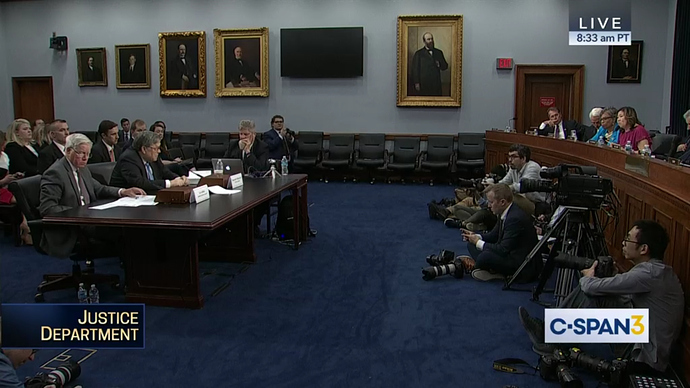 By the way, the Democrat Party has a few assholes on this committee.

All the DNC has to offer are assholes.

Now, put a custom frame around it and use it to show family photos of the committee members with various fades and dissolves.

It is a television there on the wall.

Barr was testifying before the House Appropriations Committee, yet the asshole Democrats kept pounding him with demands for an unredacted Mueller report and concerns about what he discussed with the President regarding same…despite numerous reminders that they were there to discuss FY 2020 BUDGET REQUEST items.

It started with the chairman’s opening statement and continued throughout the hearing.

Definitely the Democrat Party is full of frantic assholes.

When they thought the Mueller report would give them what they wanted vs when it didn’t.

Expand the photo and it’s appear to be a LED monitor.

But with a black frame it could be a photo/picture of Trump which would require redaction. No fancy gold frames for the current president.

I recall libs saying “let’s be patient and let the professionals work”. That’s because innuendo was as powerful as an indictment. Now… whoops…

Barr should mention that his work is part of a legitimate justice activity and that demands to make haste might be construuuuuuuuued to be obstruction of jus.tice.

Remember that? The thread of obstruction charges? Let’s use the same threat now.

Crist is one such asshole! Didn’t he switched parties because the state of Florida kicked his ass out of his cushy job? The asshole then switches parties so he could get elected again. Total scumbag! He is the poster child why term limits are needed, among others of course!

While it was their Witchhunt they were eager to see head’s roll for the slightest of things, even “obstruction” when there was no underlying crime. Now judging by comments at that other place if the tables turn it’s the end of the Republic and justice if we were to go after Leftists that actually committed crimes.

Yep! Apologies! I hope I didn’t offend anyone. Truly an error on my part!

Actually, autocorrect on my iPad tried to do the exact same thing.

If anyone is curious: yes, your apps are out to get you.

Oh yeah… political payback, banana republic, yada yada yada. I can imagine. What a cesspool there.

The Dems (ala Deep State, Radical Left) needs a new scandal. Here I will make a prediction. After beating the Russian horse to death, they will now move on to making a connection between China and Trump. Note the recent apprehension of the mysterious China Mara La Go guest destined for the “swimming pool” and found to have surveillance apparatus on hand. She got past the Secret Service checkpoint. Yuiing Zang the perp in this case has a connection to Robert Kraft, a Trump supporter who is facing charges on soliciting prostitution. MY OPINION, (admittedly a stretch at this point) is that this could grow into a sex trafficking scandal that would allegedly involve POTUS. Another case of accusing the opposition of what you yourself are doing… Just a thought.

The cost to the nation brought on by party loyalty, disingenuous representation of constituents, parroting of party leaders, graft, corruption, and ignoring of the Constitution is incalculable.

Good assessment. If there’s one thing about the “seriousness of the charges” guff it’s that it is very easy with such a standard to set up and manufacture incidents. The ChiComs are a good call because they’ve been corruption buddies of the Clintons and still in places of power Clintonistas for decades. Count on the likes of the Muslim Brotherhood as willing partners who, at least domestically, suffered a terrific set back when Hillary lost.

Even now we see them floating the idea that there’s a cover up of Muller’s real findings now that Muller hasn’t been able to find something on the pretext of the made up/contrived earlier charges/witch hunt.

Frankly, they’d accuse him of eating babies if they thought it would work.