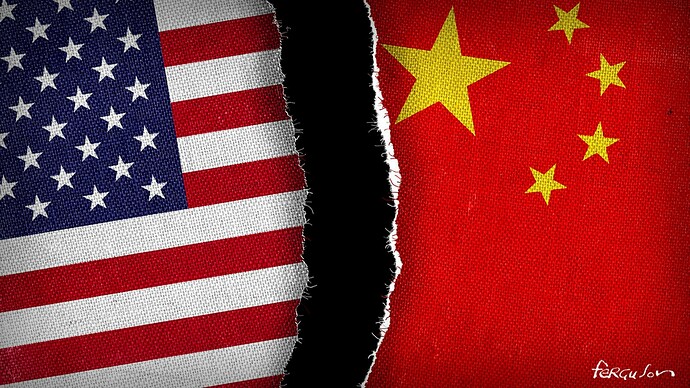 The Chinese Communist Party is continuing to seek capital from the West in the hopes of buttressing its domestic economy struggling with the ongoing effects of the regime’s strict zero-COVID policy, according to China expert retired Brigadier Gen. Robert Spalding.

“There’s this competing effort happening where many of the Chinese proxies … are trying to help continue to push capital into China. At the same time, we are seeing these COVID controls within China which are really about controlling the population, are creating issues with the supply chain,” Spalding, a senior fellow with the Hudson Institute think tank, told the “Newsmakers” program, a co-production by The Epoch Times and sister media outlet NTD, on Nov. 23.

The analyst, also a contributor for The Epoch Times, pointed at the turbulence in the Chinese stock market in recent months.

“So what is happening? Well, I think it means that the Chinese Communist Party is trying to continue to get capital out [to] the West, continue to remain connected. At the same time there’s this realization that things are coming apart,” Spalding said, adding that this situation has created a lot of volatility and uncertainty which isn’t good for business.

His comments came ahead of mass protests across China over the weekend against the regime’s draconian zero-COVID policies, marking the biggest display of public opposition to the communist regime in decades. The protests sent Chinese stocks tumbling on Monday, though markets rebounded on Tuesday in the hopes of an easing of the COVID restrictions.

“My concern is that it is not moving fast. And as you know if we get into some kind of issue where there’s some kind of confrontation between China and Taiwan, you can see the supply chain can be the lever by which the Chinese Communist Party begins to coerce the United States,” he said.

There are many products for which the United States is dependent on China and they can be used by the regime to control the United States. Spalding is particularly concerned about pharmaceuticals.

“It could be pulling on the hard strings on Americans as it impacts their daily health,” he said.

Rosemary Gibson, a senior adviser on healthcare issues at the bioethics-focused Hastings Center, in congressional testimony in 2019 said that U.S. national health security and national security are both threatened by its dependence on China for thousands of ingredients and raw materials to make its medicines.

“If China shut the door on exports of medicines and their key ingredients and raw materials, U.S. hospitals and military hospitals and clinics would cease to function within months, if not days,” said Gibson (pdf).

Spalding said that since gaining a third term in office, Chinese leader Xi Jinping feels emboldened and will continue to seek Western capital and technology flow into China.

“I think that you are going to see the Chinese continue to pressure the United States in ways that certainly Biden was receptive to during their meeting on the sidelines of the G20,” he said, referring to the recent face-to-face meeting between Xi and President Joe Biden.

Spalding believes that with the new Congress next year, there’s going to be pressure on the U.S. administration to begin to completely sever its trade and connectivity with China. 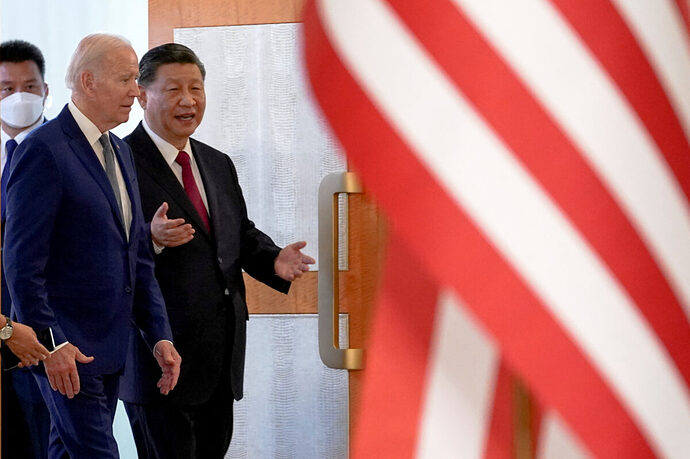 CCP Continues to Seek Capital From the West as China's Economy Deteriorates:...

The Chinese Communist Party is continuing to seek capital from the West in the hopes of buttressing its ...

China has been a economic powerhouse for many years, but some experts believe their days of dominance may be numbered. The country’s economy is currently facing a number of challenges, including a slowing growth rate, high levels of debt, and rising labor costs. These factors could eventually lead to a sharp decline in China’s economic output. While some may see this as a good thing, it would actually be very harmful to the global economy. China is currently the world’s largest manufacturer, and their products are essential to the supply chains of many multinational companies. If China’s economy were to crumble, it would have a ripple effect throughout the world, causing widespread job losses and economic disruption. It is in everyone’s best interest for China to continue to prosper.

China is an economic competitor of the United States, and they routinely engage in unfair trade practices that harm American businesses. China is a third world shithole and the United States would be better off without any trade relationships with them.

One way to cripple the Chinese economy is to dramatically increase tariffs on Chinese imports. This would make it difficult for Chinese companies to sell their products in the US, and it would put a strain on the already-fragile Chinese economy. In addition, the US should provide financial support to Taiwan and other countries that are opposed to China’s growing influence. This would really piss China off, but the US could protect its interests and ensure that the 21st century remains an American century.

The Communist Chinese government is one of the most oppressive regimes in the world. They censor the internet, control the media, and persecute religious minorities. They have also been caught stealing American technology and engaging in unfair trade practices. But what really gets my goat is their treatment of animals. In China, there is no such thing as animal cruelty laws. Cats and dogs are routinely slaughtered for their meat, and bears are kept in tiny cages so that their bile can be harvested. China is also the world’s leading producer of ivory, which comes from the tusks of slaughtered elephants. I’m not even going to get into the horrific practice of dog and cat leather production. The bottom line is that the Communist Chinese government has zero respect for animal life, and they deserve to be punished. I hope they get what’s coming to them, and I hope it’s painful. 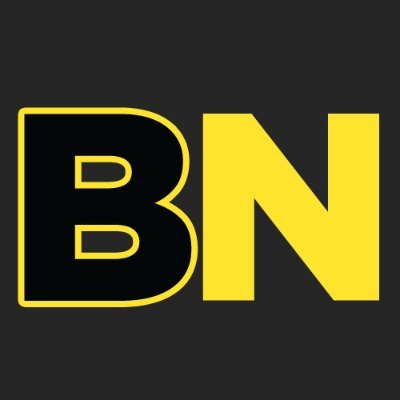 @NewsBecker
Tucker Carlson: "Apple is in no sense American. Apple’s loyalty belongs to the [Communist] Government of China. Earlier this month, Apple did the bidding of the Chinese government to crush domestic protests against the Chinese Communist Party." https://t.co/mvB8HblHUi
Vawter November 30, 2022, 5:45pm #7

Apple is one of the most successful and iconic American companies in US history. If you are new to the business world, you probably wouldn’t understand the types of agreements that many American companies have in place with China regarding political matters. Essentially, if the company violates these agreements, they will be unable to do business in China. This is quite common and not exclusive to Apple. Sorry if that doesn’t fit your narrative.

As usual you are a moron for assuming what I know and trying to educate me and others on what most people who are not biased on how they disseminate news know by now. The fact you are completely obtuse to what is being conveyed in this post further exposes your idiocy!

It doesn’t change the fact that I’m right.

It also doesn’t change the fact that what you stated previously is irrelevant to what the issue is being highlighted. I am correct in calling you a moron!

Get mad. Stay mad. Doesn’t change the fact that the majority of American companies doing business in China are bound by these agreements and have to comply or risk having their operations shut down.

No one is mad, that is just you making assumptions based on feelings again. Regardless if American companies have to comply with agreements, you completely are missing the point on what Apple did and who Apple is. The fact you are formulating your argument around an altruistic point of view while being obtuse at the same time with what the main point of what the OPED is pointing out only re-enforces your lack of depth on the subject matter altogether.

Apple doesn’t have to nor are they bound to any agreement that is antithetical to their values. The fact that most of you leftist morons decry your objections on words like democracy then turn around to defend such companies like Apple when they deface the very meaning of such terms on the basis of compliance and fealty to a communist country shows your complicity as well as your hypocrisy.

Apple doesn’t have to nor are they bound to any agreement that is antithetical to their values.

That’s the most ridiculous thing I have ever read.

They are absolutely legally and financially bound to these agreements. It has nothing to do with how they “feel” about a particular issue.

If Apple, which has the most heavily indexed stock in the world, got their manufacturing operations shut down in China for violating the terms of their agreement, this very fragile economy would collapse. Think about that.

Some have no idea what living in a communist country is like nor what the culture is, yet they are perfectly happy to pontificate from their chairs in cushy rent free of their surroundings having no experience in international finance or corporate law. Yes you are right in calling out altruism, it’s the autocratic constitution they advocate for! Why are liberals so dumb?

That’s the most ridiculous thing I have ever read.

Are you in corporate law? How many international corporate contracts have you successfully negotiated on behalf on American companies doing business in China? Can you speak fluent Mandarin?

They are absolutely legally and financially bound to these agreements. It has nothing to do with how they “feel” about a particular issue.

Its not based on feelings moron! Its based on the terms and particulars of the contract itself, which you can’t cite nor know anything about.

If Apple, which has the most heavily indexed stock in the world, got their manufacturing operations shut down in China for violating the terms of their agreement, this very fragile economy would collapse. Think about that.

Apple is the most heavily indexed stock in the world. One wrong move and

Which is why they don’t have all their eggs in one basket. Duh! Go look at their portfolio and the moves they have been making in the last 5 years in order to safe guard against a changing climate such as rising labor costs due to an emerging middle class in China.

Last quarter market share is at 11% when it comes to smart phones and 6% for their computers. They are vastly being outperformed by more cheaper domestic brands like Honor, Vivo, OPPO and it is only going to continue as China is no longer having to rely on US for Chip manufacturing. Bye bye Apple!

I don’t disagree; however, Apple’s stock price is a major factor in the overall market. If it were to go down drastically, it would have a domino effect on other stocks and send SPY off the rails.

Their stock has always fluctuated and taken hits in the past, nothing new. And it won’t matter anyway, because the Global economy with all their other issues such as energy prices, inflation etc. their hit will be just another casualty that most won’t really notice due to the other issues most consumers are dealing with right now.

My point is, Apple is going to take a hit no matter what, and this issue as it relates to purposely shutting off the airdrop feature on Chinese customers phones will only exacerbate their losses as many will sour on their products for doing so. One thing I will say when it comes to pissing off Chinese consumers who were once loyal to the brand is once you lost them, you won’t get them back, in other words they don’t forget. Apple once had close to 30% market share to which the company has seen drastically erode especially in recent years, and the writing is on the wall. 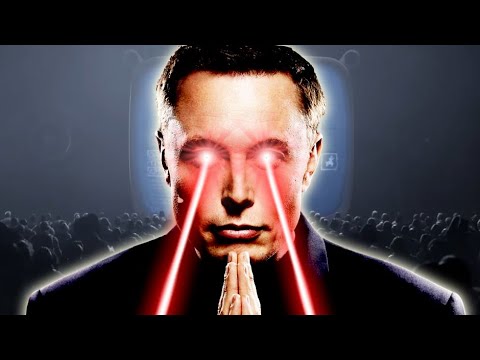