The state’s largest operator of recycling redemption centers has closed all 284 of its centers, leaving 750 employees without jobs and many who rely on income from redeeming bottles and cans without options.

RePlanet, which runs recycling redemption and processing centers all over California, ceased its operations and will undergo a process to have its assets liquidated and creditors paid, according to a statement from company president and CFO David Lawrence.

“With the continued reduction in State fees, the depressed pricing of recycled aluminum and PET plastic, and the rise in operating costs resulting from minimum wage increases and required health and workers compensation insurance, the Company has concluded that operation of these recycling centers and supporting operations is no longer sustainable,” his statement says.

The move comes three years after RePlanet shuttered 191 of its recycling centers and laid off 278 employees, citing the same reasons of falling aluminum and plastic prices and rising business costs.

“We are devastated to hear that RePlanet is closing all of its sites and all of its doors,” said Jenna Abbott, executive director of Protect CRV, a young trade group of local recycling center owners and customers formed just over a year ago to advocate for statewide legislation and policies to protect recycling centers. “The best-case scenario is that people will have to travel farther to (get money back on) their redeemable containers. The worst-case scenario: they just might not have that opportunity.”

Those who might not have that opportunity include the homeless or others who rely on recycling for income.

And the overall result will be more cans and bottles ending up in landfills.

“It is a huge blow to California’s recycling infrastructure,” Abbott said of RePlanet’s closure.

The closure will leave parts of the Bay Area with few or no options for redeeming their recyclables. RePlanet had centers in Brentwood, Antioch, Concord, San Francisco, San Jose, Sunnyvale, Palo Alto and Santa Cruz, among others.

For advocates, the closure is an alarming signal that the state needs to do more to help the recycling industry.

Liza Tucker, an advocate for nonprofit Consumer Watchdog who has studied the issues in California’s recycling industry, is urging the state to reform the way it subsidizes recycling centers. Currently, CalRecycle — the state recycling regulator — calculates the state’s payments to recycling centers by averaging the costs of running centers. But business costs are going up, and it’s especially expensive to run the centers located in grocery store parking lots, which happen to be the most convenient options for people.

According to Consumer Watchdog, more than 40 percent of all redemption centers have closed in the last five years. A report from the group published earlier this year found that the closures of redemption recycling centers mean consumers get only about half of their nickel and dime deposits back each year from bottles and cans.

The consumer advocacy group wants the state to require retailers who sell bottles and cans to redeem them, as other states have done. While thousands are supposed to redeem them, a Consumer Watchdog survey found that two-thirds of retailers don’t follow through on their obligation. Though many may not know they’re supposed to accept the bottles and cans and return deposits, some simply refuse to do so.

Recycling companies that empty curbside bins meanwhile are grappling with soiled recyclable materials that end up going to landfills because China has become far more strictabout the kind of waste it will buy from the United States.

Moreover, Tucker said, the redemption money from recyclables should be going back into the pockets of consumers, and until there are more options to do so, recycling will suffer.

“If consumers could just take their empties to stores and redemption centers were everywhere, consumers would get their refunds, and we would have less litter and more recyclable material to make new bottles and cans,” she said in a written statement. 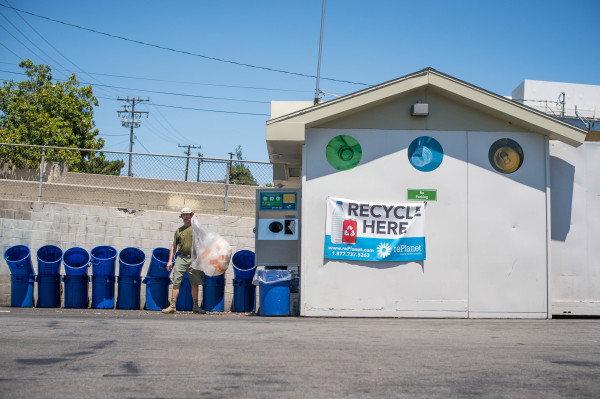 The closure will leave parts of the East Bay with few or no options for redeeming their recyclables.