California Moving Toward Ban On Little Shampoo, Conditioner Bottles From Hotels Perhaps water in hotels is next

SAN JOSE (KPIX 5) – California is moving toward banning those little bottles of shampoo you get in hotel rooms.

“In California alone hotels use hundreds of millions of single use plastic bottles every year,” said Assembly Member Ash Kalra of San Jose.

Kalra is co-authoring a bill that would ban the tiny plastic bottles at almost 10,000 hotels state wide.

“We can get those bottles out of the waste stream, but also cut the production of them, which is also harmful to the environment,” he said.

“This is a significant step forward to make sure that these bottles do not get into the bay,” said Santa Cruz County Supervisor Zack Friend.

Karla’s bill, AB 1162 is working its way through committees in Sacramento. If it passes on the assembly floor later this year, the ban would not take effect for at least three years. 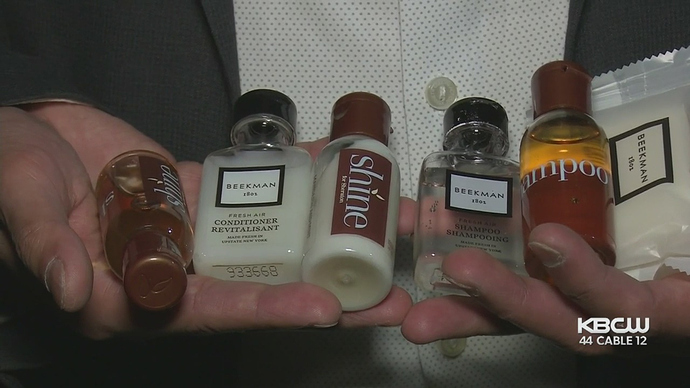 California is moving toward banning those little bottles of shampoo you get in hotel rooms.

Obviously, the fact that California’s economy is in the toilet, people are leaving in droves, gangs are taking over the cities and San Francisco is becoming a port-a-potty pale in comparison to the scourge of little shampoo bottles!

“This is a significant step forward to make sure that these bottles do not get into the bay,” said Santa Cruz County Supervisor Zack Friend.

Hey Zack, those bottles aren’t getting into the bay all by themselves. Sounds like your residents are the problem, not the bottles.

Just another step into the realm of stupidity.

I’m sure this will really be a boost for California’s tourism. Now when you want to go on a tour of urban street shitting you can forget about having any means of cleaning yourself up after you’re done.

If we think about this one wonders how the bottles get in the bay? I throw them in the trash to be disposed of by the hotel, the hotel throws them in a dumpster to be put in a licensed landfill. So who’s intercepting half filled bottles of shampoo and soap? Surely doesn’t take an einstien to narrow down a list of suspects…

Yeah, that’s a pretty weak line of thinking. CA doesn’t have a “little shampoo bottle” problem. It’s a people problem if they are ending up in the bay.

the scourge of little shampoo bottles!

The truth is, they arent there to solve problems. They are there to create and look for problems, so they can keep their jobs, of moving public tax money around. A few rounding errors here and there and youre a millionaire, just look at Uncle Sanders the wealthy “socialist”. It has long been known that liberals/democrats don’t actually wany to FIX problems, they just want to own the argument.

Where can all those bottles and plastic be coming from?

San Fran Trumps going to send you some more folks.

California is like a diseased limb that needs to be amputated.

If it hasn’t been done yet, sounds like a great start up company:
Biodegradable shampoo, conditioner and body lotion containers. Some nice packaging and it would probably be a successful business.

Outside of California’s politicians and their ass backwards line of thinking, I actually don’t have a problem with this.

Think of the cruise ships that dump all kinds of plastic in the oceans and what this is doing to our sea critters.