More than two decades after California voters banned consideration of race in university admissions, public employment and contracting with Proposition 209, the state Assembly on Wednesday approved a measure that would ask voters to repeal the law.

In a 58-9 initial vote, Assemblywoman Shirley Weber, D-San Diego, secured the necessary two-thirds majority approval needed to send Assembly Constitutional Amendment 5 out of her house and to the state Senate. Only one Republican, Assemblyman Tom Lackey, R-Palmdale, voted in favor of the bill.

ACA 5 would repeal provisions of the 1996 ballot measure, which prohibited state institutions from granting preferential treatment based on race, sex, color, ethnicity or national origin. Advocates of the change said it would once again allow affirmative action in hiring, contracting, and admissions.

“There is an urgent cry for systemic change,” Weber said. “The ongoing pandemic as well as recent tragedies of police violence is forcing Californians to acknowledge the deep-seated inequality and far-reaching institutional failures that show that your race and gender still matters…ACA 5 would allow Californians to revisit and express their views after 25 years.”

Despite California’s rich diversity, Democratic lawmakers argued, employment and higher education opportunities are disproportionately awarded to the white and wealthy. In the end, after more than two hours of debate, the Assembly agreed it is time to let voters weigh in the question.

“It does come with political peril,” said Assemblyman Evan Low, D-Campbell, who supported the bill but expressed concern that he’d received 99 calls in support from his constituents and more than 3,000 in opposition, many from the Asian-American community.

“It’s difficult to have race-neutral policies for very race-specific problems,” he said.

“We need every available person in California to have a college opportunity,” Dow said. “When colleges can use race as a consideration, you can really start to address some of the systemic barriers that have kept underrepresented students of color out of colleges and universities.”

Affirmative action dates back to 1961, when President John F. Kennedy issued an executive order to ban discrimination against government contractors based on “race, creed, color or national origin.” President Lyndon B. Johnson later expanded that list to include sex.

For decades, affirmative action has faced one challenge after another in courtrooms throughout America, including the U.S. Supreme Court.

The effects of Proposition 209 have extended beyond higher education. According to a 2015 Equal Justice Society report, minority and women-owned businesses lose about $1 billion annually in state contracting opportunities.

The 2017 Annual Census of Employees in State Civil Service also notes women make up half the state’s population, but 46 percent of state workers, while white workers comprise nearly 44 percent of the public workforce, but 37 percent of California’s population.

In the years since its passage, state legislators have attempted to modify the law as the legislative body has grown more diverse in reflection of California’s changing demographics.

The closest the Legislature came to revising the law was in 2014 through Senate Constitutional Amendment 5. The measure passed the Senate on a 27-9 vote but the Assembly refused to consider the amendment amid push-back from Asian-American lawmakers, whose constituents asked them to shelve the bill as they worried their children would be displaced during the college admissions process by those of other races.

Currently, Asian-Americans represent 15 percent of California’s population, but 16 percent and 33 percent at CSU and UC, respectively.

Asian-American lawmakers were divided on Wednesday, and the debate reflected diversity of opinion within that community.

“Just ask yourself,” said Assemblyman Steven Choi, R-Irvine, who urged a no vote on ACA 5. “Is it right to give someone a job just because they are white, or black or green or yellow? Or just because they are male? Repealing Proposition 209, enacted by voters 24 years ago, is to repeal the prohibition of judgment based on race, sex, color, ethnicity and national origin. We are talking about legalizing racism and sexism.”

Choi, who was born in South Korea, said that he had intentionally left behind a country “with ideologies like that.”

“When Proposition 209 is lifted, Asian Americans will receive more equal opportunities to advance,” he said. “I would not be standing here on this floor as the first Asian American to represent eastern San Francisco but for affirmative action.”

It’s not enough to change the criminal justice system, members of the California Legislative Black Caucus have recently said. They say education and labor laws also need to change.

Gov. Gavin Newsom said during a Friday press conference that he’s “long supported righting that wrong” when asked whether he supports ACA 5.

The Senate will have until June 25 to act on the amendment. Its passage would put the question on California’s November ballot.

To add insult to injury there is this also! Only in the state of “Commiefornia!” Are such things possible! 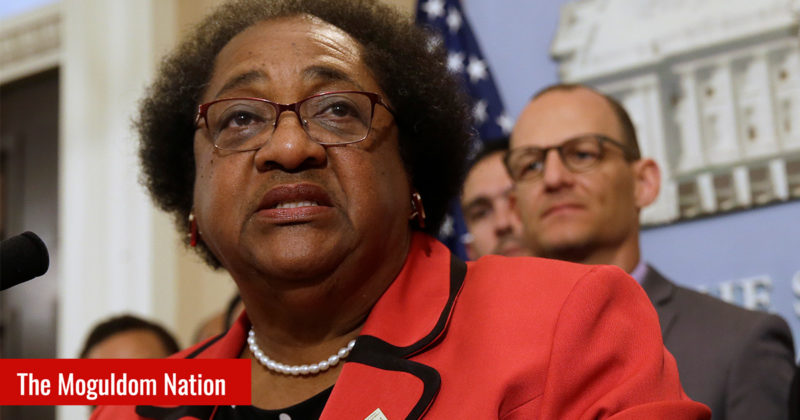 African-American Reparations Bill passes the California Assembly. The next step is a reparations feasibility study to begin no later than June 2021.

Wow- my wife and I were considering moving back to CA (weather), but we can always rent a house for the summer instead; let the fools who vote for Dems pay the bills…

Yeah I am often shaking my head at the shear stupidity of elected officials in California. It’s no doubt one of the most beautiful states in the Union, but as we’ve seen time and time again how it’s being run into the ground by the cultural Marxists now the ruling elite, with not a care of the repercussions of their bad decisions. How is this bill going to atone and lift those to a higher station in life? It won’t and by design is intended to garner more votes and keep the slaves on the plantation! What will be next? Illegals wanting reparations for being treated harshly as a result of being in the country illegally? The next victim class is right around the corner!

It can be posted on their shit maps located throughout Califoricate .!

And whites are already a minority in that state. (Something like only 1 out of 4 people under the age of 25 in that state are White, as of the 2018 statistics)
So what they are really talking about is assigning racial quotas. Asians will likely be hurt the most, and this is a very contentious issue. It remains to be seen whether Asians will be categorized as one “race”, or whether it will be broken up into different Asian ethnicities (Chinese, Korean, Filipino, etc) for the purpose of affirmative action.

Literally, Asians will have to achieve a higher test score than whites to be accepted into college, one of the big distasteful issues that have prevented these policies from being put in place in this state in the past. (Or I should say officially put in place. The state universities were secretly and unofficially trying to implement these policies around ten years ago, before there was blowback from the state courts)

Literally, Asians will have to achieve a higher test score than whites to be accepted into college 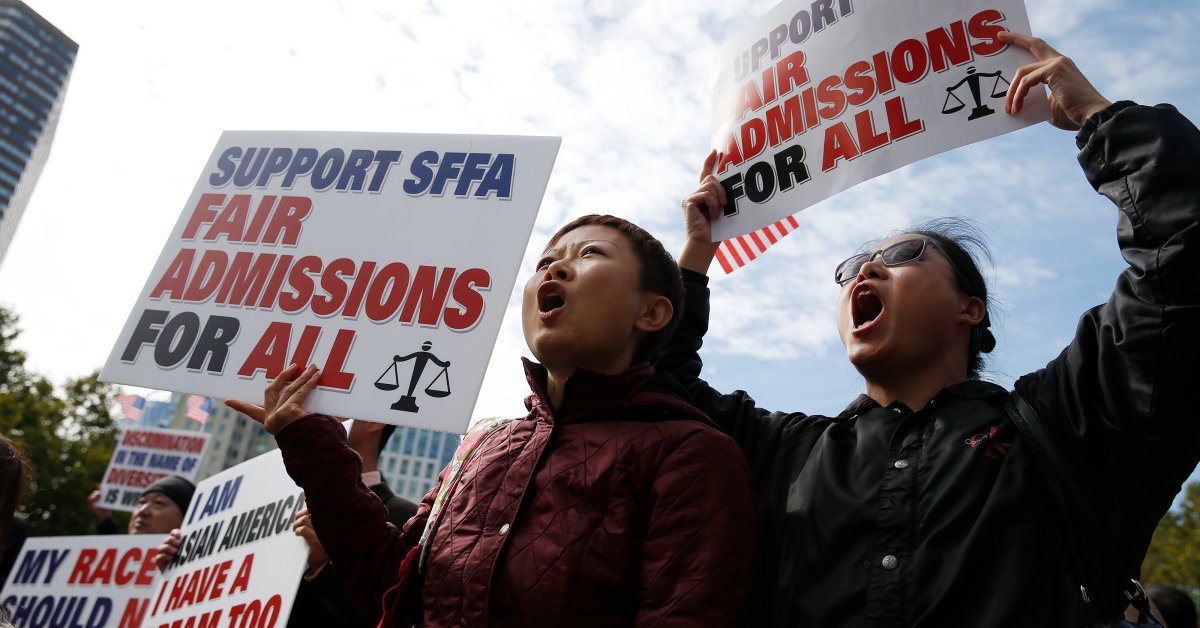 A Lawsuit by Asian-American Students Against Harvard Could End Affirmative...

Even if you get perfect scores as an Asian applicant, you can still be turned down due to “lack of personality”. The sad thing is, only Asian parents will fight against this push for affirmative actions. Asians that already have jobs dont care, asians already in school dont care, asians applying for schools are too young and brainwashed and they think the college application process is somewhat “merit-based” and this wont affect them.

The reason they push this now is because this is an election year, and the stirred-up hate for Orange Man will push them to vote yes.

It remains to be seen whether Asians will be categorized as one “race”, or whether it will be broken up into different Asian ethnicities (Chinese, Korean, Filipino, etc) for the purpose of affirmative action.

Yes, Asian is also a very broad category. East Asians (Chinese, Japanese and Korean) generally do better (financially) than South Eastern Asians such as Laos, Vietnamese, Thais …), and the very population affirmative action tries to promote will get hurt dearly. As of now, the only distinction of Asians when it comes to college applications is whether you’re a recent immigrants or not. Recent immigrants are treated as the “oppressed” POCs.

It’s a total left strawman that pro-whites believe whites are “the master race.”

Race matters and you should value your own race.
That’s it.

If I was black I’d be a black nationalist.

Be an ethno-nationalist no matter what race you are.
Civic nationalism is total bullshit. Fuck Liberalism.