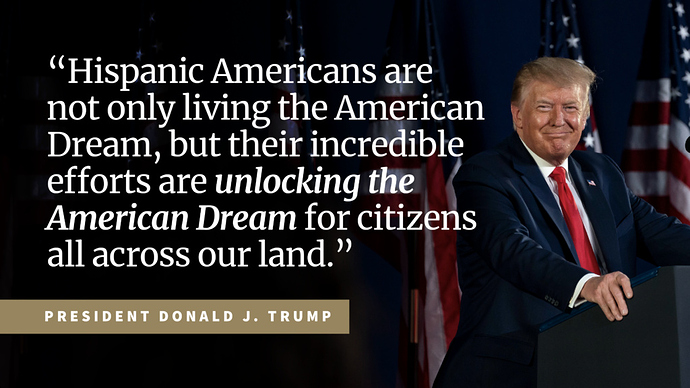 My Administration is also working to increase economic opportunities for Hispanic Americans by providing pathways to in-demand jobs and investing in Hispanic-American communities.

On July 9, 2020, I signed an Executive Order to establish the White House Hispanic Prosperity Initiative to promote educational and workforce development, encourage private-sector action and public-private partnerships, and to monitor how Federal programs best provide opportunities for Hispanic Americans. Additionally, this Executive Order established the President’s Advisory Commission on Hispanic Prosperity, which is dedicated to advising my Administration on ways to improve access to educational and economic opportunities for the Hispanic-American community.

This year, my Administration also delivered $1 billion in funding to Minority-Serving Institutions, including Hispanic-Serving Institutions. And since I signed the Tax Cuts and Jobs Act of 2017 into law, nearly 9,000 Opportunity Zones have attracted an estimated $75 billion in new capital investment in economically distressed areas, helping to bring wealth and jobs to the neighborhoods where many Hispanic Americans live. 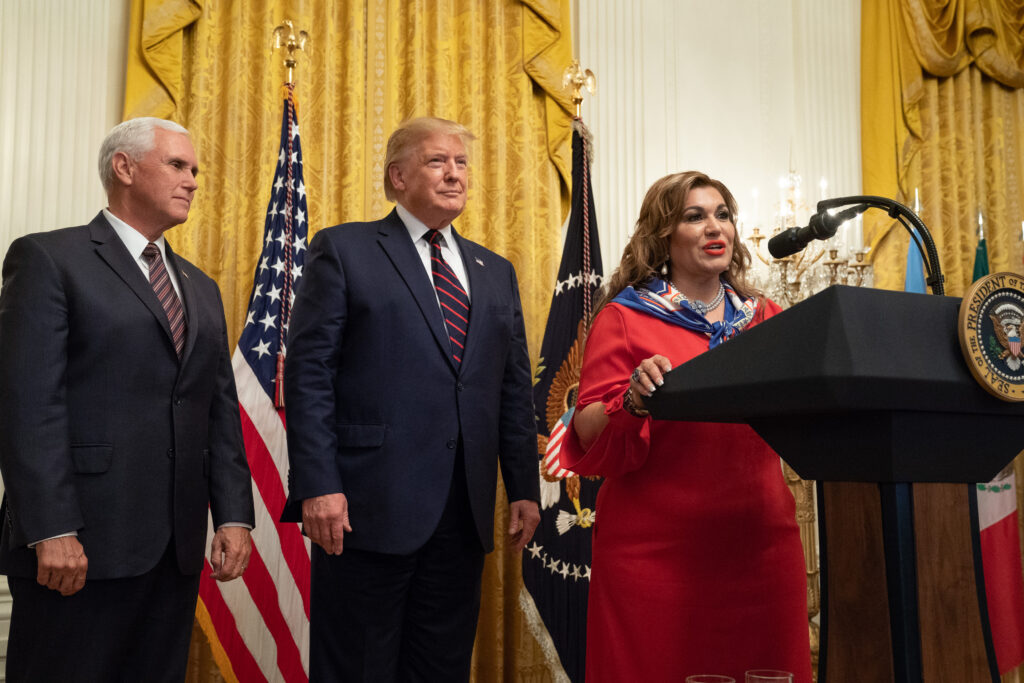 During National Hispanic Heritage Month, we celebrate the countless contributions of more than 60 million Hispanic Americans to our culture and society.  H

Wow. On the day that Trump appoints a great American to SCOTUS, this forum in in full fledged attack mode. I guess I need t go on vacation and come back after Trump’s successes prove the haters wrong

It’s pretty funny that that he thought this was an attack post on Trump when in reality it’s just posting something that Trump said and did.

What are you talking about? He literally posted the press release from the White House

I know he did, and you know what I am talking about, so don’t feign ignorance

It’s pretty funny that that he thought this was an attack post on Trump when in reality . . . .

Good for the Hispanic folks. Now where’s the damn help for the struggling white blue-collar business owner that had his or her business shutdown due to COVID and never got an ounce of “help” from anyone before, during, or after… including saving every fucking penny for a decade to start my own business and get denied by bank after bank for financing despite having a solid business plan (that’s proved right by the amount of business I was getting on my own). I tell you what. All this lopsided bullshit is really starting to piss me off. Open up opportunities like this to everyone and have it be MERIT based…not RACE based.

No PPP or the disaster relief?

Trump has to talk leftist language for some to understand

PPP was there and gone in an instant and some banks got priority over others. My local credit union wasn’t a priority. Somehow I don’t think a small engine repair shop is gonna get any COVID disaster relief. Not like I’ve heard any of that going around.

Also - who are you calling a leftist? I know you aren’t throwing that my way.

PPP is coming back and you can start now. It was out for quite a while.

There is also disaster relief. If you missed it you have been preoccupied.

YES you can get it. Defeatist attitude is what I’m seeing.

Disaster relief you can start right now. study it so you know the rules. After you do application you’ll get a deadline to decide to accept.

Obviously it has to be used for your business. You can have PPP and Disaster relief. Get on it. Be creative.

Way to be…shit on hardworking business owners who aren’t happy with their “conservative” government cutting handouts to people based on skin color.

MAGA only applies to black and hispanic unemployment rates.

MAGA only applies to black and hispanic unemployment rates

Are you a hard working business owner?

If you really want to see “shit on” then a Trump LOSS will do that quite nicely!! A Biden win will screw everyone and all their kids and grandkids. The democrats are out to destroy the Liberty we hold dear.

Less than 2 months before the election, the priority is a Trump win, unless you want to see the destruction of our republic, and see your grandkids grow up in a socialist communist state and taught to be transgenders.

Let Trump do a few giveaways at election time. Bigger things are at stake you asshole.

EDIT: And besides all that, everyone, the natural home for Hispanics should be the GOP, not the Dem party. They are usually Catholics and they usually don’t go for transgender of gay marriage filth. They need to be brought to our side. And I am pretty sure they do not like BLM

Open up opportunities like this to everyone and have it be MERIT based…not RACE based.