BREAKING: A fire and explosion at the Hoover Dam

This is a developing story 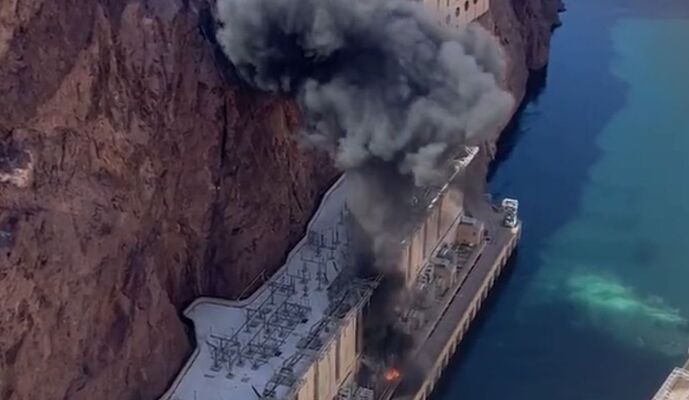 An explosion and fire have been reported at the Hoover Dam in Nevada Tuesday. Click here to join Todd’s private 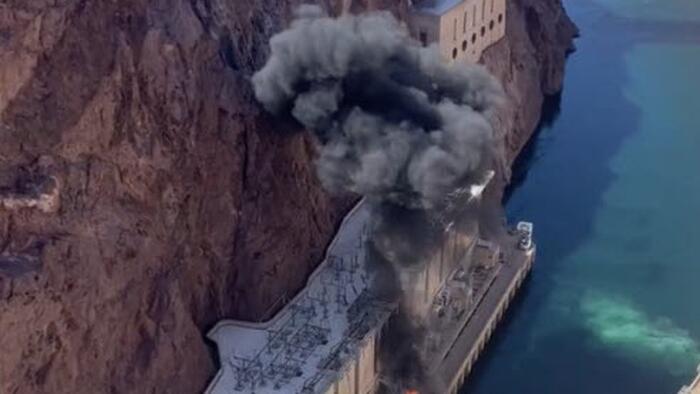 "Something Has Just Blown Up": Small Explosion Seen At Hoover Dam

The cause of the explosion is unknown... 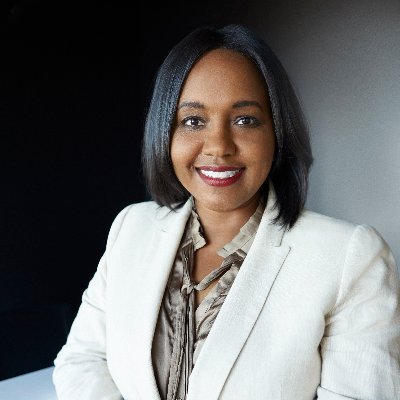 Hoover Dam, one of the most iconic dams ever constructed, has reached its lowest water level in history.

Hoover Dam is an arch-gravity dam made of concrete and is located at the Black Canyon, Colorado. It was completed in 1936 to divert the Colorado river with the aim to efficiently provide water for agriculture, generate hydroelectric power and control flooding. The project was a pioneering construction that started during the Great Depression and provided occupation for numerous laborers. Nonetheless, many laborers lost their lives during its construction. Its height is about 220 meters and its reservoir capacity approximately 35 square kilometers. The dam currently provides water to 25 million people in the western United States. More on the history of the Hoover dam can be found here.

In early June 2021, the water level of the dam dropped to 326.6 meters above sea level setting the lowest level in history when the previous record was documented in 2016. The reservoir’s annual high and low Elevations from 1935 to 2020 can be found here.

The conditions of the reservoir are concerning since only one drop of more than 40 meters has been observed during the past 2 decades. It is currently only 37% full and the federal government officially declared a water shortage. The problematic situation derives from the extreme drought that has recently struck the Western United Stated. Droughts are natural phenomena that periodically occur and their impact has been controlled over the years, however, scientists agree that their frequency and intensity have increased, a fact that can be associated with human-induced climate change. Climate change can be blamed for higher temperatures during spring and summer (that lead to more wildfires), less snow accumulation during the winter and durable dry seasons. According to the U.S. Bureau of Reclamation, the current period is the driest one that the Western United States have experienced in 115 years.

I was reading something on lake Mead and that the lake was being drained intentionally. Of course could be another conspiracy theory nonsense. 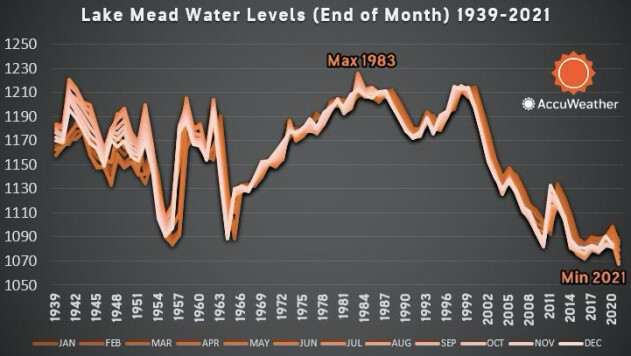 1983 the lake had reached its highest recorded water level at 1,225 feet. While the maximum lake storage capacity is technically at an elevation of 1,221.4 feet, according to the National Park Service, that elevation reaches the top of the spillway crest at Hoover Dam. The high water line mark is at 1,229 feet.

That summer, water had gushed over the spillway, spewing up mist that “was almost like rain,” Wilcox recalled.

Farther upstream, Powell Lake and Glen Canyon Dam were having a similar problem in 1983.

According to a 1995 post from the Los Angeles Times, Lake Powell had been prepared to receive the normal runoff from the snowpack that had been forecast that year. However, warm weather and rain altered that runoff total, and the actual runoff was instead 210% of normal. Criteria for me to take climate change with even a hint of seriousness:

I’m feeling pretty confident that none of these boxes will ever be checked.