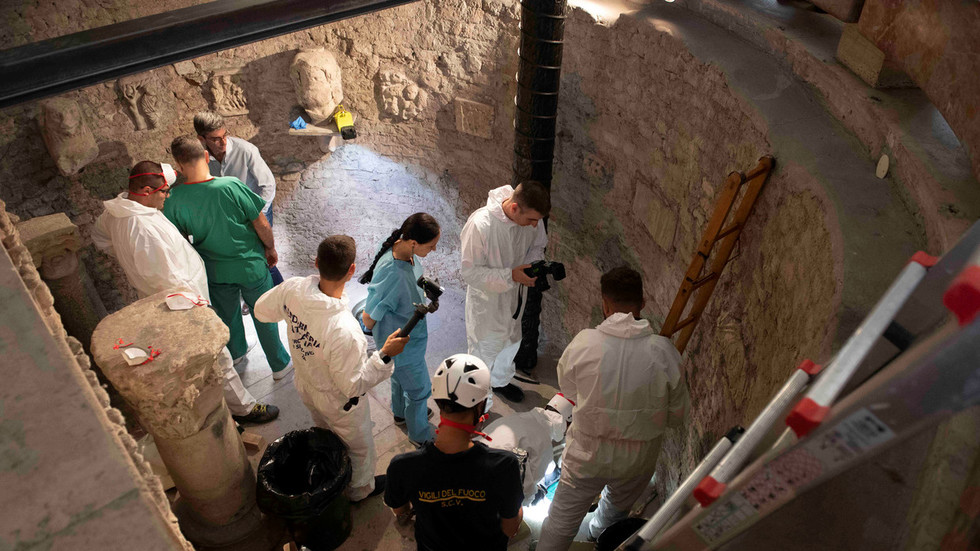 Thousands of bones found in Vatican search for missing teen

Thousands of bones have been unearthed by forensic experts from two ossuaries within the Vatican as part of an ongoing search for the remains of a missing Italian teen who disappeared in 1983.

This, however, does not mean that Catholics are bad people. They only need to grow out of blind beliefs.

The catacombs under the Vatican have been used for burials since before the birth of Christ.

The Orlandi family received an anonymous letter earlier this year saying Emanuela’s body might be hidden among the dead in the Teutonic Cemetery where a statue of an angel holding a book reads “Requiescat in Pace,” Latin for “Rest in Peace”.

Breaking news, this just in, scientists discover that water is wet.

Catacombs throughout Europe hold bones from various periods but not recent ones.
It was a weird experience to visit a shack near the monastery on Mt Sinai or thereabouts where the room full of skulls of resident priests were stored.

People are still interred in the Vatican Catacombs and ossuaries around Rome, it is a high honor.

Just look at pictures of the galleries of bones beneath Paris.

I guess some folks simply aren’t aware that throughout much of human history the tradition was to leave a coprse where nature could clean up the bones then gather the bones in boxes etc and bury them in caverns, tunnels, caves etc.

Well, in the case of Paris they sorta stacked them in the walls and attics till the walls etc came down and the corpses literally scattered round.

The decorative mounds of bones were from one guy deciding to do something besides get them out of sight and out of mind.

The catacombs under the Vatican have been used for burials since before the birth of Christ.

Absolutely correct … which makes is an ideal place to hide a body.

Just look at pictures of the galleries of bones beneath Paris.

Catacombes. Underground ossuaries that hold the remains of more than 6 million people beneath Paris.

Yet the catacombs under Paris that are dedicated to ossuaries are only a small part of the actual catacombes that traverse underground.

In some cultures it was even customary to keep the skulls of your family members around so you could communicate with them long after they were gone.

There are a lot of customs over the centuries that we find odd.

For instance, it was at one time customary to place a brick in the mouth of a corpse so that they could not “chew their way out of their grave”.

Then there’s the “graveyard shift”. People once buried occasionally would “come back to life” having not really been dead so they placed a string attached to a bell above ground so they could ring it and be rescued before running out of air.

“… the Vatican has a deep, dark secret at its core. Ever since the Church’s inception, it has been infiltrated by a group of shadowy and powerful individuals who practiced all aspects of the pagan faith including offering human sacrifices to their demon gods.”

“It means a person refuses to see something in plain view, because of preconceived notions of what this something should look like. This frequently happens to naïve people.”

What does the phrase “eyes wide shut” really mean?

Some say it is the origin of the phrase “saved by the bell”.

As an interesting aside, the phrase “blowing smoke up your ass” came about in the 1800’s when doctors would use tobacco enimas to treat a variety of diseases or conditions.

None of which of course can be supported by any known fact.

Why don’t you troll somebody else? It gets boring.

If you cant’ handle being confronted with facts you better learn to stick to private messages with Magog.

I communicate with him telepathically. LOL