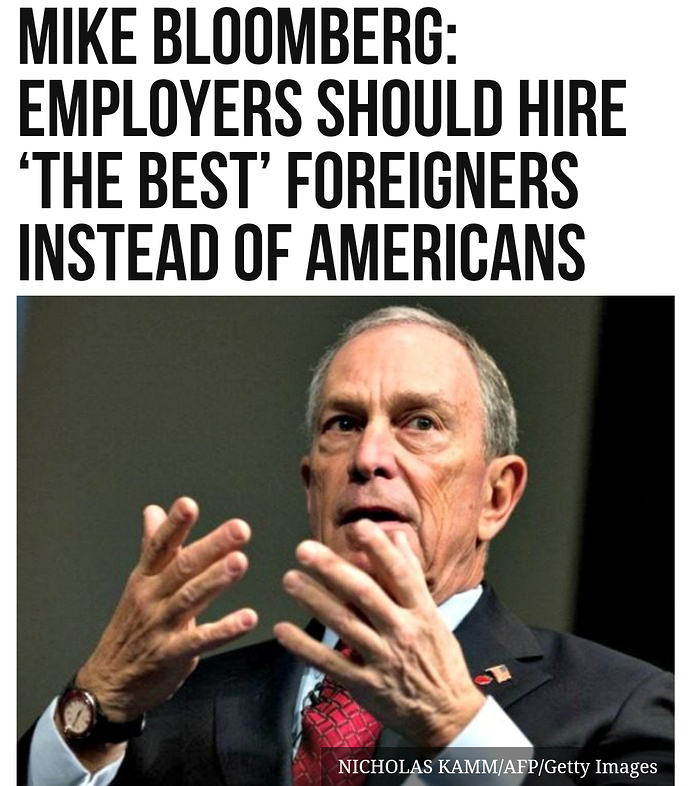 I suppose this is an improvement compared to the current plan of hiring the worst and cheapest foreign workers.

Investor, CEO, and presidential candidate Mike Bloomberg says he would allow investors and employers to hire the “the best” workers from around the world instead of Americans.

“This country needs more immigrants and we should be out looking for immigrants,” Bloomberg told the San Diego Union-Tribune on January 5.:

The reporter did not ask Bloomberg to define “best.” But for cost-conscious shareholders and executives, “best” is a synonym for ‘cheaper than Americans.’

“If business were able to hire without restrictions from anywhere in the world, pretty much every [American’s] occupation would be foreignized,” said Mark Krikorian, director of the Center for Immigration Studies. He continued:

Americans would have to accept dramatically lower earnings, whether they object or not. Not just landscapers and tomato pickers, [because] Indians and Chinese by the millions can do nursing and accounting. There would not be any job that would not see its earnings fall to the global average.

Bloomberg — who has an estimated wealth of $55 billion — is trying to exempt investors and shareholders from the nation’s immigration rules, said Krikorian. For Bloomberg, “immigration laws are not one of those things that should be allowed to interfere in [the growth of] shareholders’ value,” he said.

This country needs a business strategy that puts the American worker first. If 90% of an American company isn’t staffed by naturally born Americans, then they lose their ability to operate. They can use the remaining 10% to hire truly extraordinary individuals from anywhere in the world. Plain and simple.

This country needs a business strategy that puts the American worker first.

That’s difficult to do for business owners, sad to say.

Code for open borders to let third world welfare recipients in. What better way to solidify your voting base?

Then why is Bloomberg running? Surely, there is a foreigner somewhere that’s better than him.

It’s cheaper for multi-billionaires like this globalist traitor to enslave poor desperate foreigners from shit-hole countries than hire fully qualified patriotic tax-paying Americans. Bloomberg is the epitome of evil.

He’s going for the Judge Judy-Jorge Ramos axis. Alas, I suspect that Judge Judy won’t have the impact that Oprah’s endorsement had for Obama.

He may be an impossible longshot, but he’s sure helping the propaganda media with his massive infusions of advertising.

Yeah - the ads are crazy. I saw one the other day about healthcare with some shrill and whiney NY woman droning awn and awn about Mayah Bloomberg and how good he was faw healthcaaah.

His campaign makes no sense. He has no chance at winning the nomination. Why bother?

It makes me wonder when in the hell will the demoRATS tax that bastard at 90% ?

Dem’s are all in with flooding the country with generations of immigrants in order to seize and hold permanent power for themselves.

All of the “asylum seekers” they allowed to flood the country for the last six years are on various forms of welfare.

They will be as beholding to democrats for the next forty or fifty years as those who saw Roosevelt as a God for saving them in both the depression and WWII.

You do realize that it’s mostly poor foreigners in Trump’s employ, right? 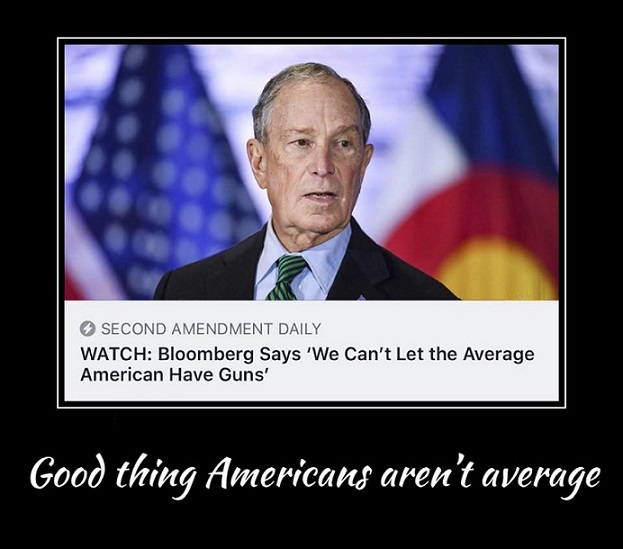 All Bloomberg did was ride Rudy Giuliani’s coattails into office. Bloomberg didn’t clean up the city or make it better, Giuliani did all that. The only thing Michael Bloomberg did as mayor of New York City was ban plastic straws and tax soda. Bloomberg only managed to stay as mayor for so long because he didn’t screw up what Giuliani did. When someone takes a broken city, fixes it, then hands it off to you all you have to do is keep it in the same condition that you received it in. That defines Michael Bloomberg’s entire political career.

He convinced Albany to give him control of the city schools and made some very good changes to education that increased graduations from 49-64%. Banned smoking in restaurants and a whole host of things besides straws and soda. Unfortunately Diblasio has reversed much of what he did in education.

People from New York City don’t generally pay close attention to the schools because unless you are from a really poor area, you aren’t going to New York City public schools. If your family is working class and above you are going to some type of private school. The Italians and Irish obviously all go to Catholic School. The Jews have their own schools. The Asians have their own schools. So on and so on. I think the only people sending their kids to New York public schools are transplants from out of state, illegals, and very poor minorities. I’m not trying to get into a larger race discussion about this. I’m just saying how it is from someone who was born and raised in New York City and whose family all still lives there. I’m the only one who left and the way the natives do things hasn’t changed. So… test scores went up… hey good for him and making it a priority. I am not surprised that Mayor de Blasio screwed it all up.

I’ll tell you what I’m getting tired of seeing this sniveling little rat on my TV screen every 5 minutes. I don’t care what he did or didn’t do for one single city in this whole country. He’s not getting my vote and he’s not going to get the nomination from his idiot party.

Show us all of the people employed by Trump’s various enterprises and give us a list of those who are illegals.

The city has been in decay under the last two Mayors and crime rates, particularly violent crime rates have shot up dramatically over the last couple or three years.

So… test scores went up… hey good for him and making it a priority.