Why do birds move their heads in jerks as opposed to slow movements?

If I remember from biology it has something to do with their skeletal structure in their neck. It’s not a learned behavior if that’s what you’re getting at.

No… I figured it was genetic instinct. I thought MAYBE statistically their predators or prey are less likely to see a motion if they do it like that. Or maybe the muscular structure that does that is way more economical in terms of energy and weight.

But was wondering if anyone knew more about it.

The experts opinion:
Many birds use rapid head movements to achieve or aid their depth perception.

That is often the case for birds whose eyes are located on the sides of their heads, rather than the front. The benefit of this arrangement is they have a very wide field of view, which helps them to recognize predators approaching from any direction. The drawback is that the overlap of their eyes’ field of view is small or non-existent.

Overlapping field of view provides many animals (including us humans) with depth perception even when our heads are stationary and we’re observing static objects, because our brains can recognize the subtle differences between the images that each eye sees. Many birds that don’t have this overlap will tend to hold their heads stationary for a short period of time, then rapidly move it to a new position. Comparing the images from before and after the move gives them depth perception - their brains integrate the ‘before’ and ‘after’ images similar to how our brains integrate the images from the left and right eyes.

What is missing in this discussion is that most bird’s hearing and sense of smell (excepting buzzards) are lacking.

Birds are made for flying, it requires rapid 4D measurements and correction.

There is some comment to the Human draw to social media here, but I digress.

Although scientists have traditionally thought of birds as lacking in the olfaction department, they have proved that many detect aromas and use them-to varying degrees-to select mates, forage, and locate nesting spots. Some seabirds, like storm petrels, recognize the odor of a compound emitted by krill, their main fare. Turkey vultures track the stench of decaying flesh to ferret out the carrion they eat. Their keen sense of smell (superior to that of other vultures) has even been exploited to pinpoint leaks in oil pipelines. When ethyl mercaptan, a chemical redolent of rotting meat, was pumped through one 42-mile line, the hoodwinked scavengers congregated at the cracks. New Zealand’s flightless and nearly sightless kiwi sweeps its bill back and forth like a bloodhound to sniff out insects in leaf litter. And honeyguides, birds that often lead people and animals to beehives, can locate concealed beeswax candles.

I can attest to the fact that Flickers/wood peckers have a ken sense of smell as they are drawn to dead wood.

Some owls have a superior sense of hearing…to detect movement of small prey in underbrush and beneath snow. In some species, the hearing is enhanced by the shaped of the feathering around their ears. 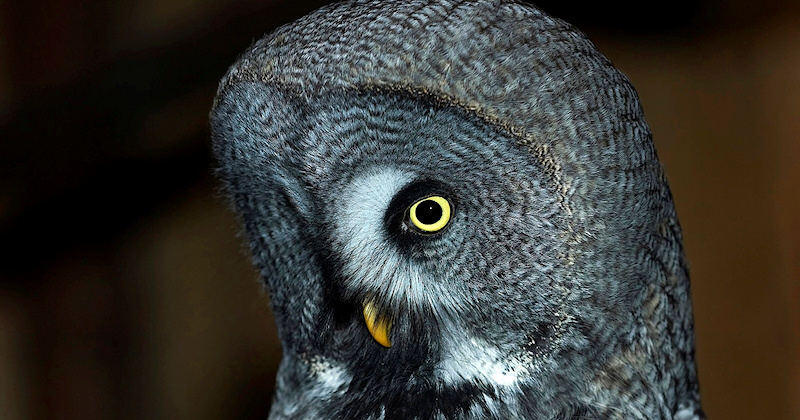 See how an owl's unique sense of hearing works

Your comment on vultures was particularly why I exempted buzzards in general.

Being a Physics guy, I start from first principles and years of observation gained while afield and hunting.

It happens that I used to work on aircraft flight control systems. I have always been curious how birds generally, and in species specific cases are so good at aerobatics.

Owls are a peculiar case. Most have forward-facing eyes, with large separation distance (relative to body weight) implying good binocular vision, like humans. I don’t know if all owls can hear, but the ones I have shared the woods with use hearing to cue thier visual activity.

However, Owls don’t generally conform to the OP’s point of rapid/jerky head movement. Their senses and use thereof seems more similar to what humans do.
I see owls several times per year while hunting deer from treestands. I always feel a kinship with them, they are ambush hunters too. They rely on being unseen by being still, then swift and silent.

My most memorable experience as a young hunter (Peter and the Wolf style) was with a huge owl that was buried beneath the snow, eating the rabbit that I was out to kill.

When it broke out of the snow not three feet in front of me, I fell back on my ass as the owl hovered for a slow flap or two, staring at me with huge eyes…and then started flying away from me, without turning its head from the staring contest until it was about 20 feet from me.

I think I’ve related the entire story here somewhere, if not on freebird.is before we moved.

I admire birds of prey…

Here are some photos I made of a Peregrine Falcon having dinner on a low wall ledge next to a busy downtown sidewalk. 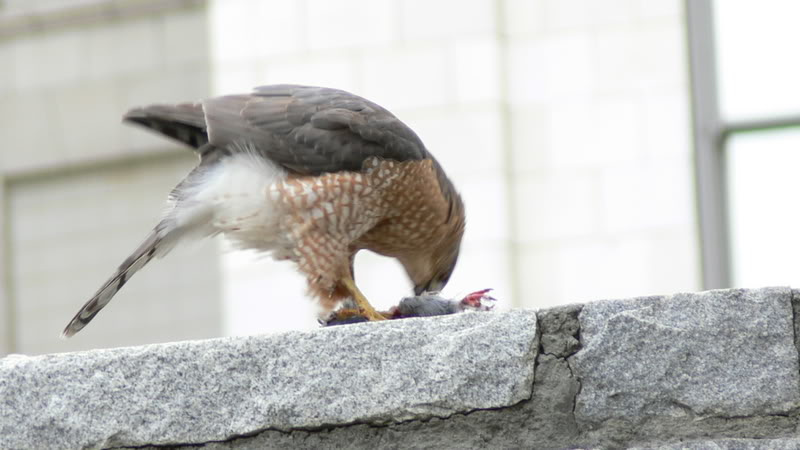 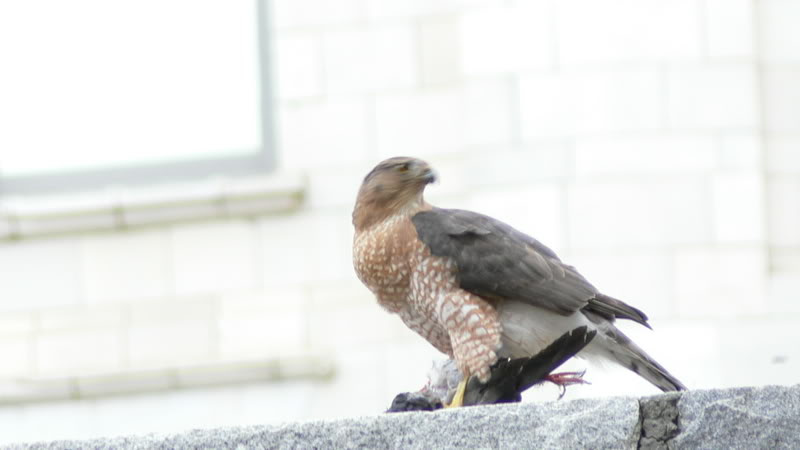 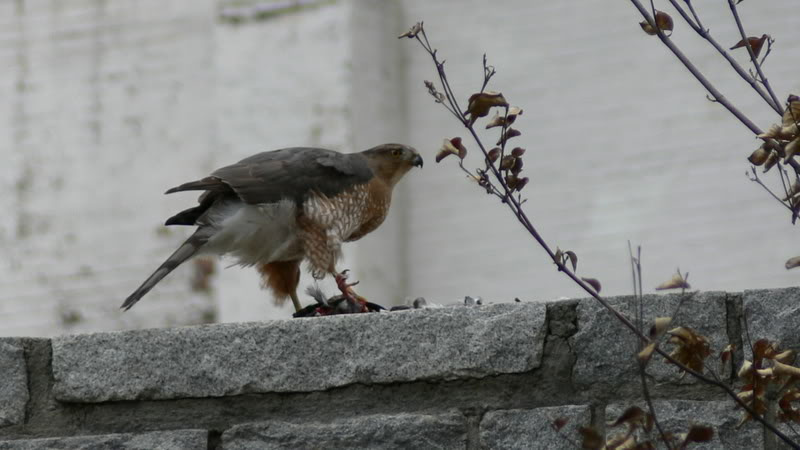 My office was 26 floors up and had windows that went from floor to ceiling, giving an unobstructed view of the outside window ledge.

My view overlooked a downtown park where many pigeons flocked and moved around to feed themselves or to be fed by park goers.

Often, the falcons would perch on one of my window ledges. When ready to dive into the hunting area below, they would simply fall forward…and not spread their wings until they were two or three floors beneath mine…and even then, they didn’t flap much.

The Peregrine Falcons that I know have a more white underbody and have a striking dark eye stripe.

I have seen them in the East, during their migration. Over the years, I have come to believe that they see through my camo while I hunt from treestands and fly in to see what I’m hunting.

They do eat the fish from my pond, but I have to respect my fellow hunters.

Some do appear to have lighter colored undersides. Maybe it has something yo do with their age.