Biden – ‘I would like Michelle Obama to be my vice president’ 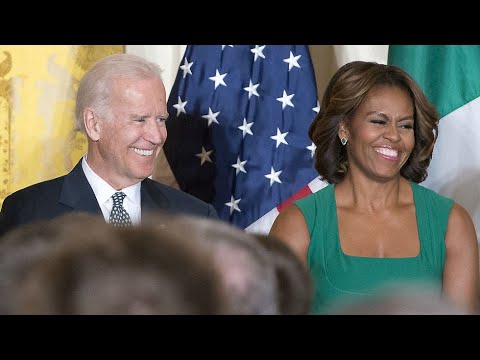 Talk about a balanced ticket! One white racist counter balanced by a black racist! You know when Joe is getting desperate when he is desperately seeking a life preserver from a sinking sink. What is even more interesting in the video above is the dead silence being heard at the mere mention of Obama being impeached!

Desperately pandering for the black vote. He also said he wants Kamala Harris and Stacy Abrams to be his VP. Biden is a washed up joke.

What bad news. I was hoping he would ask for Cornpop.

I wouldn’t be surprised if both Michelle Obama and Hillary jump into the race to save their own asses now that impeachment witnesses are on the table. If Hunter Biden gets called to testify watch the former Obama administration rush to jump in to the race.

Michael is too busy carving himself out a career as the next Oprah. No way does he bail Biden out.

You would have Gaffer Joe and Orangutan Obama. It would be worse if he wanted Mad Max as VP!!!

What bad news. I was hoping he would ask for Cornpop.

That was seriously funny. Well done

I honestly don’t believe Joe ever thought he stood a chance in hell of being elected President. It’s like he got bungled into the position somehow. I just don’t see his heart being in it.

Then again, the massive ego resulting in cognitive dissonance for some of these people is really astounding.

He serves a purpose as being a distraction to the unfolding scandal of Ukraine, Barisima. Maybe that is why they are so pissed that Hillary lost, because had she won all of corruption would never had seen the light of day.

Joe is desperate and simply playing the usual game of pandering to blacks.

Of course he is, but the larger point is did anyone who votes democrat thought Joe Biden had a real chance of beating Trump? Any democrat worth their salt and are honest with themselves (oh yeah like that is a common characteristic of a democrat) know that Biden’s chances are slim to none.

I like what this guy said the real motives. Bloomberg or Warren are basically the ones left standing come November.