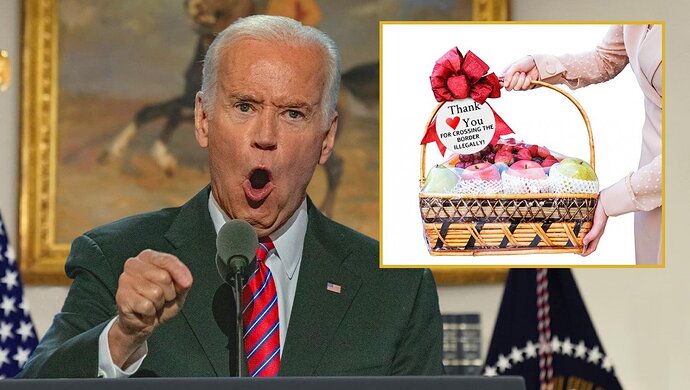 SOUTHERN BORDER—The situation at the southern border is out of control, and it’s no more Mister Nice Guy for President Biden. He’s taking his harshest measures yet, suspending the program to hand out gift baskets to everyone who illegally crosses the border.

“Cheeses, crackers, a bottle of locally made wine…” Biden told the press. “If you think you can illegally cross our border and get all of that, well, that’s no longer true.”

This cruel measure has made Biden unpopular with left-wing activists. “It’s inhumane,” said Monica Ballard, a liberal pundit. “If we stop giving people delightful gift baskets, they’ll begin to think we don’t want them to illegally cross our border.”

Critics on the right, though, don’t think Biden has gone far enough. “You have to stop giving them that coupon book, too,” said an angry, racist redneck. “That coupon book is full of valuable savings — they don’t deserve that for illegally crossing our border! And stop giving them all voter registration cards; there’s something suspicious about that.”

With the program at the southern border ended, Biden is instead sending all the gift baskets they already had to the Taliban.

But we will still give them $300 per child, bus them to a city near the working taxpayer and of course provide that good old stimulus bread .

Shit! Now they are only going to get free healthcare, housing, education, and food. We truly are a cruel and inhuman people.

Kamala will beat her to it. Oh… wait…

Illegals should get some compensation for making the trip.

I’m sure you’d be in the front of the line….