Truly, an advanced form of cancer. And dont get me start on how this person will vote to at her new affordable place, so down the line her children will be priced out to Mexico.

A Bay Area native shared her story of being priced out. She moved clear across the country-- from San Francisco to New Hampshire-- and still runs her business that’s in the city.

“I was living paycheck to paycheck,” said Henry and added, “I’m above median household income but in the Bay Area that’s super low income. I was tired of struggling-- that I was never able to own my own home.”

This Bay Area native says she was flexible and left her Tenderloin studio apartment for a bigger place in Santa Rosa. But when it came to buying a house that was still not an option.

“Home values here in San Francisco so we’re talking about Oakland, Marin and San Mateo is about $950,000 for the median home. In San Jose it’s up to $1.1 million to $1.2 million and the next most expensive place is LA-- it’s about $300 less than San Francisco,” said Cheryl Young, Senior Economist at Zillow.

“To start to see what I could afford in New Hampshire, New England.”

Five months ago this single mom made her dreams come true. She bought a two-unit victorian home and the price tag you may ask? $215,000 plus $40,000 in repairs.

Henry is also planning to rent the downstairs unit of her house for $1,800. Her mortgage is $1,400. For the first time, she will be making money.

According to Cheryl Young, other Bay Area residents are also moving out of the region in search of bigger and more affordable properties.

“What are those trends that you are noticing? More people in the Bay Area moving to more affordable places like Reno and Las Vegas,” said Young.

Henry decided to look east, and we’re not talking about the East Bay. 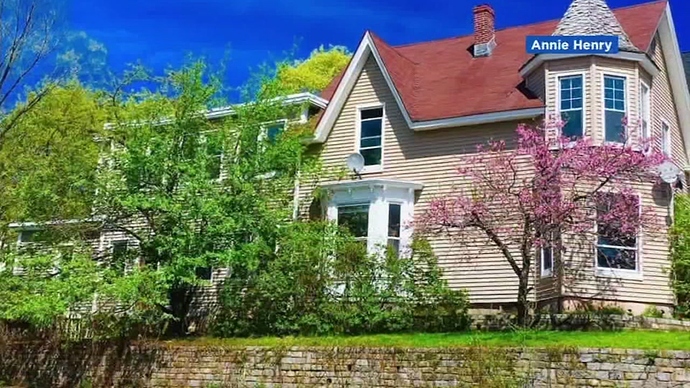 A Bay Area native shared her story of being priced out. She moved clear across the country-- from San Francisco to New Hampshire-- to buy her dream home and still runs her business that's in the city.

Nothing in that article indicates she’s “commuting” from NA to SF.

She’s running her business there remotely which is quite simple with modern tech.

I guess technically she is “telecommuting” which is fairly common across a variety of industries.