If you don’t read this and you get suspended today, that’s on you. Claiming ignorance to a site-wide policy isn’t an excuse.

I am not as eloquent as @Patriot but here goes.

I think I cleared out about 200+ flags between last night and this morning. The weights from the flags have been adjusted with the algorithm. That means to those who are receiving a warning, but decide to post anyway, take this as a final warning - your post will be reviewed and if deemed toxic you will either be silenced or suspended for a duration in time set by the mod based upon the severity of the post.

Constantly calling someone a LIAR every time they post their opinion is also completely unnecessary. That is an attempt to shut down free speech and to get the person sharing their opinion to stop posting. If that behavior keeps up it will result in a suspension. This is on the same level as a direct personal attack. Be warned - this will not be tolerated. If something is an outright lie then it is easy to provide sources and explain why the position is not correct. Disagreements and battles are fine.

Everyone is sick and tired of the personal attacks. Those who are demanding moderation the loudest are the most guilty. Understand this - it is not the role of a moderator to pick a side. If you can’t formulate a coherent argument then don’t bother responding to a post. Move on. Don’t engage in a personal attack. I shouldn’t have to tell this to people all older than me. Sad times. Don’t act like schoolyard bullies and we won’t have a problem. Don’t test me on the personal attacks after this post either. I will silence, suspend, or ban you.

Remember - this is the moderation that you demanded, don’t be mad when it is applied equally.

As far as the accusations of bait posts and trolling goes, it’s very simple. Don’t take the bait. Just move on and contribute in threads that you find worthy of your time. We aren’t going to fall all over ourselves dealing with bait posts. They have been around since the start of internet.

One point I want people to remember is that just because you don’t like something doesn’t mean someone is trolling or bait posting. It just means that YOU do not like what they are posting. As far as moderation is concerned, we aren’t going to moderate off your personal feelings about a topic or issue.

Thread derailment is an issue that we are aware of. Not every single post here needs to turn into a discussion about Nazis, ■■■■■ Israel, or Trump. If you feel like someone is intentionally derailing a thread then DO NOT GO ALONG WITH IT. Just flag it as off-topic so we can do something about it. If you respond to the initial derailing post then you too are taking part in derailing a thread. You also have nothing to complain about since you aren’t a part of the solution. Remember - if it is off-topic just send a flag. One of us will get an immediate notification.

Finally, if you don’t like talking about or seeing a particular topic or subject matter we have plenty of ways to hide things from view. Some of the most controversial and flagged topics are in #Conspiracy. If you don’t want to see these threads or have them larding up your inbox, then just go to Categories, click the category you don’t like, click the small circle to the right of “New Topic” and you can mute the ENTIRE CATEGORY. You will never see it on your homepage and you won’t get any emails about it. See below. 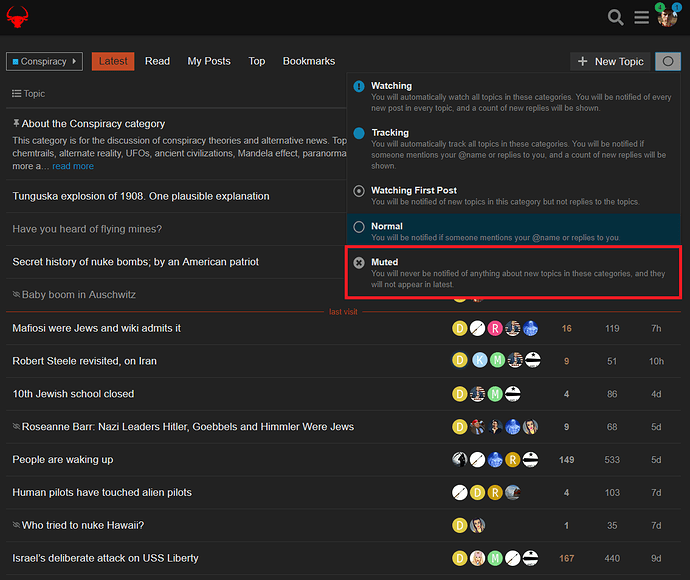 If you don’t want to read the posts of a particular user, then all you need to do is click on their avatar and set them to ignore. I believe @Patriot already provided instructions on how to do that so I won’t put them here. If you need help in doing that just send me a direct message.

Let’s all try to get back on track.